Calif. Army veteran whose leg was amputated due to necrotizing fasciitis looks toward future 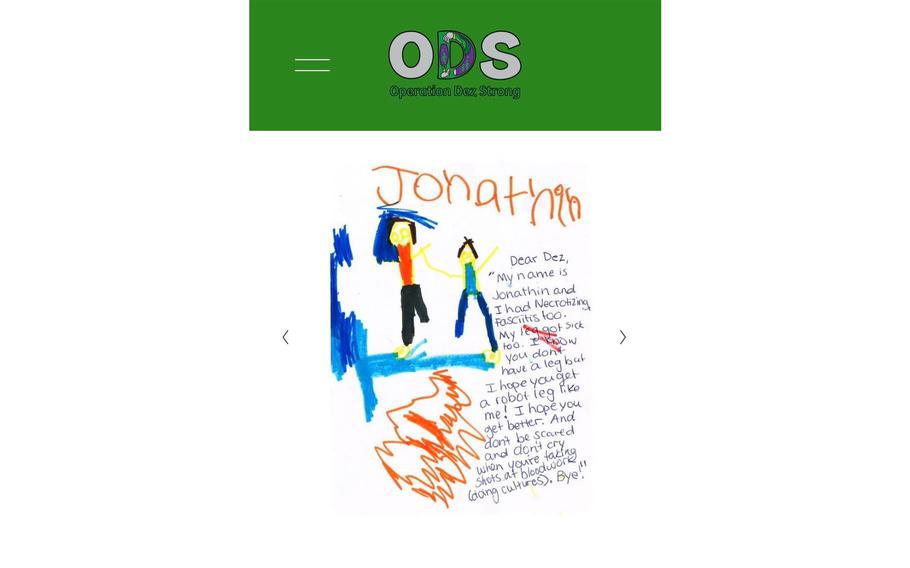 Drawing and letter from 5-year-old Jonathin Perez to U.S. Army veteran Dez Del Barba. The two connected and have inspired Operation Dez Strong, a nonprofit founded by their mothers to provide financial and emotional resources to children who have undergone amputation. (Screenshot of ODS website/TNS)

During that time, the then-21-year-old Stockton native and U.S. Army veteran was stricken with streptococcus A, which rapidly turned into necrotizing fasciitis, a flesh-eating bacteria. He has undergone 43 surgeries, had his left leg amputated, suffered severe damage to his right left and had skin grafts over 55% of his body.

Del Barba, 24, described it all as an "emotional roller coaster."

"It's been a crazy journey and looking back I'm pretty proud of where I am today," he said.

Del Barba was honored as a "hometown hero" during the Dec. 19 Sacramento Kings game for his "commitment, service and sacrifice," the Kings said.

It was nice to see the energy of the stadium and the smile on her son's face, said his mother, Kamni Del Barba.

In 2019, Dez Del Barba had taken a leave of absence from his last semester at Sonoma State to complete basic training and then go on to officer candidate school and earn a commission in the California National Guard.

Those plans were derailed when he became ill five weeks into basic training at Fort Benning in Georgia and his energies focused on trying to beat a deadly illness.

Eventually out of his struggle came some good.

Katie Perez was scrolling through Facebook when she first read of his story and shared it with her then 5-year-old son, Jonathin Perez in hopes to distract him from his upcoming appointment for a blood draw.

As she read, Jonathin began asking his mother to write to Del Barba.

The letter read: "Dear Dez, my name is Jonathin and I had necrotizing fasciitis too. My leg got sick too. I know you don't have a leg but I hope you get a robot leg like me! I hope you get better. And don't be scared and don't cry when you're taking shots at bloodwork (doing cultures). Bye!"

The two connected and have inspired Operation Dez Strong, a nonprofit founded by their mothers to provide financial and emotional resources to children who have undergone amputation.

"I've met a lot of great people ... that have helped me through mental challenges and physical challenges," Del Barba.

And on Dec. 13 Del Barba graduated from Sonoma State with a degree in business administration and management. And he has been hired as a business development representative for Bill.com, a San Jose software company.

"I can tell you this when I was in the ICU, I never pictured myself graduating," he said.

Looking toward his future, he offers advice to those facing difficulties.

"Fall down seven times, get up eight. Just never give up. You know, tomorrow will always come and tomorrow is always a new day," he said.