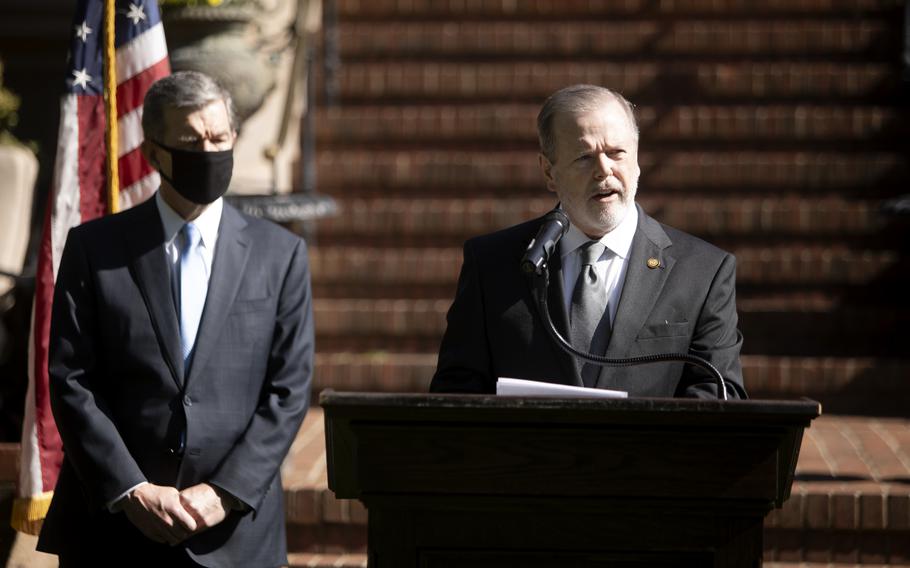 (Tribune News Service) — Starting Jan. 1, military retirees who settle in North Carolina will no longer be subject to state taxes on their pensions.

The North Carolina General Assembly approved eliminating the state's tax on military pension income in the fiscal budget that was signed into law by Gov. Roy Cooper in November.

Cumberland County's delegation of lawmakers sponsored and cosponsored bills to champion the effort.

Clark, a retired Air Force officer, filed a Senate bill in January that supported the initiative, which was backed by Army veteran deViere, who was a cosponsor.

Szoka, a retired Army officer, and Wheatley filed the House version of the bill in February that passed a third reading in the house in June.

The only military pensions that have been exempt in North Carolina were those for veterans with five years of service before August 1989.

Under the new law that goes into effect Jan 1., the exemption applies to retirees who have served in the armed forces for at least 20 years or those who medically retired or survivors of one of those veterans.

"It's recognizing the service to country that keeps us all safe, and it's a small way to honor service of veterans and to let them know that we are truly the most military-friendly state in the union," Szoka said during a news conference earlier this month.

Speaking from the House floor on June 16, Szoka said that the General Assembly has passed bills that support the military during the past 10 years to include those that protect: military installations from encroachment, airfields from overdevelopment, spouses needing professional licenses in a new state and a bill that supports military children with autism.

Military retirees, Szoka said, have seen the world and country and "look at North Carolina and they see the things that we have done for the military."

"But the one thing that I constantly get questioned about is, 'What about retirement pay,'" Szoka said.

Coleman wrote that the average military retirees are younger than 50, with more than 20 years of work history and desire a second career, which is "what is needed to fill civilian or contractor positions within North Carolina's military and defense sector."

Coleman wrote that North Carolina would be at a disadvantage if it did not exempt military retiree pay from state income taxes, because of the other states that already do.

Coleman wasn't the only one who called into question the way the state's tax law has applied.

It was discussed by Col. James Brumit, president of the North Carolina Council of Chapters of the Military Officers Association of America, during a November Cape Fear MOAA Chapter meeting.

Brumit referenced the Bailey vs. State of North Carolina case that allowed exemptions for service five years before August 1989 but said those who retired between 1989 to 2021 did not receive the same benefit.

"One of our initiatives this year was to put a full press on the legislators and get a bill passed that would eliminate taxes for any veteran or retiree that was receiving benefits so he or she would not have to pay taxes on it," Brumit said.

It's been an initiative for the past 22 years, he said.

During the House's June 16 meeting, Szoka estimated that eliminating the pension taxation for military retirees would have a revenue decrease of about $30.8 million the first fiscal year it goes into effect and $34.9 million the following year.

However, he said that many military retirees start small businesses, which generate payroll and taxes.

Citing a Clemson University study, Szoka estimated that if 2,000 more military retirees decide to settle in North Carolina based on the exemption, the bill "would pay for itself."

"We say that we're the most military-friendly state in the union, and I think that passing this bill will truly prove that to military retirees not only in our state but across the nation, and hopefully we'll get a lot of them moving here to help our economy," Szoka said.

In a June 18 NC House Republicans YouTube video, he estimated that there are about 100,000 retired military service members in North Carolina.

He estimated that between 6,000 and 8,000 service members separate from the Army each year at Fort Bragg, with 1,200 to 1,500 of those soldiers choosing to retire, during a February interview with The Jacksonville Daily News.

The objective of the legislation, he said, is to keep newly retired veterans in North Carolina.

"I hear it all the time from people, 'If only North Carolina wouldn't tax my retirement pay I'd stay here, but I'm moving,'" Szoka said in February.

In a Nov. 19 news release on behalf of the Cumberland County legislative delegation, the lawmakers said that elimination of the income tax on military retirement "will ensure that many of our veterans will settle here in Cumberland County and in North Carolina."

Col. Scott Pence, Fort Bragg's garrison commander, called the law an "achievement for military retirees," in a statement provided to The Fayetteville Observer.

"Military retirees go on to serve as educators, first-responders, executives, and community leaders," Pence said. "Many more of us will reside in North Carolina for our sunset years. North Carolina has one of the largest military footprints in the country, and we recognize the positive message this sends to those who have served our nation."