At 108, California WWII veteran has stories to tell 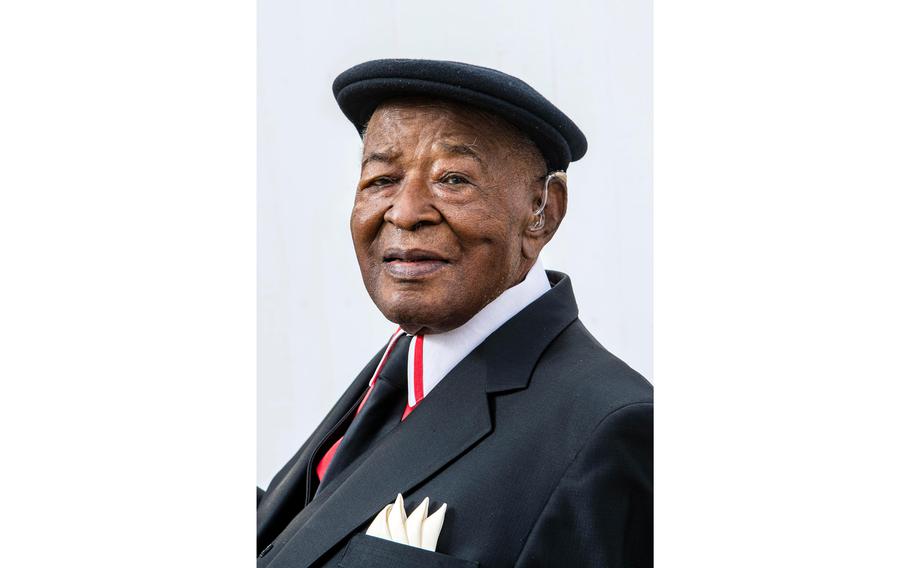 At 108 years old, Warren Bussey, sits for a portrait in the driveway of his home in Santa Ana on Tuesday, December 21, 2021. Bussey, who is a WWII veteran, is believed to be the oldest African American in Orange County. (Mark Rightmire, Orange County Register/SCNG/TNS)

“When I was a young man, I never thought I would grow to be the age I am today.”

Few would. The Santa Ana resident and Army veteran is 108.

Mr. Bussey, as he’s known to generations of neighbors and friends, is believed to be the oldest Black man living in Orange County. Earlier this month, he was celebrated by friends and recognized by city officials with a proclamation.

“I’ve seen a lot of things happen,” he said. “I’ve lived through thick and thin.”

Born on Nov. 21, 1913, Bussey grew up on a farm in a tiny East Texas community called Bobo, where he remembers working on a cotton compressing machine. He was one of 12 children.

During World War II, he enlisted in the U.S. Army. That took him to Ft. Leonard Wood in Missouri, where Black soldiers were segregated from white soldiers and treated very differently. They weren’t just excluded from amenities like the local pool; they also were not given the supplies needed to stay safe, he said.

Bussey recalls one particularly horrific incident while he was a rifle instructor training his troop: “Most of my crew froze to death.” Of 12 men in the company, only four survived, he said.

Suffering from frostbite on his hands and feet, Bussey was transferred from Missouri to Victorville, Calif. At the time, he had a brother living in Fullerton. So in 1946, after receiving an honorable discharge, Bussey moved to Orange County. A few years later, he met the woman who would become his wife, Mamie Eva Johnson Bussey, who went by “Jimmie.”

Orange County, where the Ku Klux Klan was once active, was not hospitable to its Black community.

In the 2009 book of oral histories, “A Different Shade of Orange: Voices of Orange County, California, Black Pioneers,” Bussey said this about the community of that era: “Orange County was prejudiced. … Living in California at that time, it was more prejudiced than it was in Texas.”

Until the late 1960s, when he walked into a white family’s home for work, he had to do it via the back door. And he said Fullerton, where he and other Black families lived on two blocks, “was more prejudiced than Santa Ana,” so he moved to Santa Ana, which at the time was home to Orange County’s largest Black population.

Bussey had numerous businesses at different times, including a shoe shine business, an upholstery shop and a soul food café he ran with his wife in Santa Ana. He was most proud of a cleaning business, Bussey Maintenance, which he owned for some 44 years.

As an employer, Bussey was known for offering jobs to many when they needed it most.

“If you lived in the neighborhood and needed help, you could knock on his door,” said Santa Ana resident Dwayne Shipp.

“You could always go to Mr. Bussey and get a few words of encouragement or you could go over there and he would have a job for you,” said Shipp, president of the Orange County Heritage Council, a non-profit dedicated to the county’s Black community.

Bussey said he worries about today’s youth and whether they’re taking advantage of opportunities afforded them, like an education.

Shipp said: “One thing I got from him growing up; he always encouraged us that anything we want we could have as long as we worked for it. And he was a prime example of it. Everything he had he built from the ground up.

“He said, ‘When you wake up, we all have the same thing – we have a chance and a choice … to do something. He always said: ‘You have the same 24 hours. You just have to make it happen.’”

Bussey made it happen even when times were difficult.

“I’m one of the lucky ones to be living today. I think so many Black men are killed for nothing. I thank God for sparing me.”

Longevity runs in Bussey’s family. His mother lived to 106 and one of his sisters lived to 102. His sole remaining sister is 90 years old. (His wife passed away in 1984.) He has one daughter and five surviving godchildren, as well as many friends, including some from the city’s Black-majority Masonic lodge, which he helped open in the 1950s and where he’s now the last living founding charter member.

Bussey, looking dapper recently in a three-piece suit and snap brim hat, still lives in the same Santa Ana house that’s been his home for decades. He walks with a cane and has a hard time hearing, so at times he speaks slowly, and thoughtfully.

Among the things Bussey shared: He was proud to see Barack Obama become the first Black president of the United States; he has participated in Orange County’s Black history parade since it first began; he was the first black businessman to place an ad in the Orange County Register.

And because he’s a centenarian, he’s used to sharing one more thing – his secret to living such a long life.

Bussey doesn’t even hesitate when asked. He just smiles and says: “Hard work and soul food.”