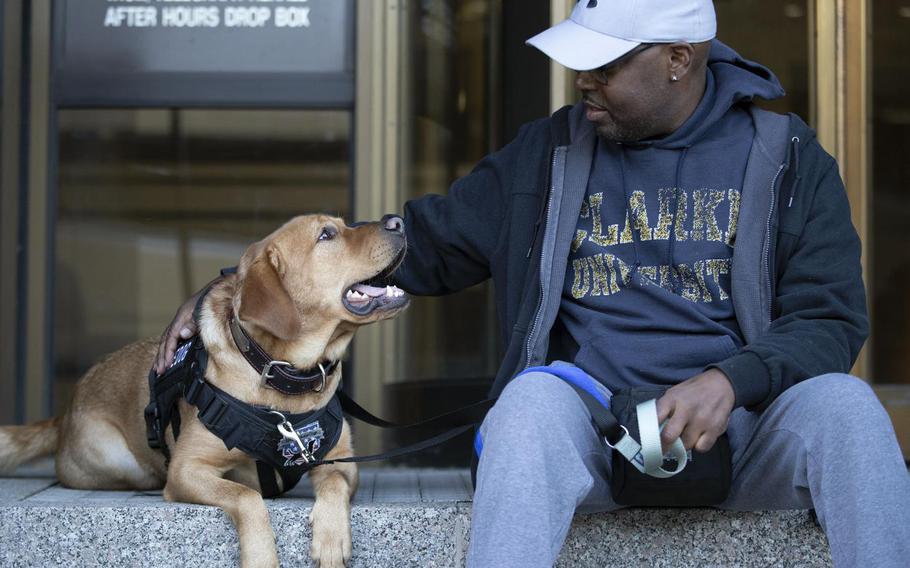 DUBUQUE, Iowa — Steve Vincent glanced down at the dog standing patiently beside his chair.

Doc, a 2-year-old yellow Lab, immediately picked up the leash that Vincent had dropped, returning it to his owner.

"Thank you," responded Vincent, a resident of Maquoketa, Iowa.

Nearby, Dubuquer Garland Shirley patted his own dog, Smitty, who lay quietly at his side. Like Doc, Smitty sported a black vest proclaiming his status as a service dog.

Vincent and Shirley were paired with Doc and Smitty through IOWA (Inspiring Our Warriors of America) Service Dogs.

The Dubuque Telegraph Herald reports the nonprofit, launched in 2019, provides mobility and psychiatric service dogs to first responders and veterans at no cost. Shirley and Vincent are the first two "warriors" to graduate the program with their canine companions.

"These individuals went out and served for us, whether for our country or for a community, and they've seen a lot and done a lot for us," said Jamie Fisher, executive director of IOWA Service Dogs.

During his first deployment, he sustained a substantial head injury during an explosion, an injury that went untreated.

"We were told that if you weren't dead or shot, you keep on working, so that's what I did," he said.

Vincent was medically retired and honorably discharged in 2012. However, he struggled upon his return to civilian life.

Diagnosed with post-traumatic stress disorder in addition to his brain injury, he became anxious in public.

"It had been a year since I got back, and I never left the house," he said. " … I don't like people getting behind me and touching me. It's like I turn around and go back into combat."

Being matched with his first service dog, Dee, in 2013 offered Vincent a new lease on life. She kept him calm, gave him someone to talk to and provided comfort in tense or emotional situations.

After eight years of service, however, Dee was ready for retirement. So, Vincent's wife, Julie, helped him apply for a new service dog through IOWA Service Dogs — and Doc entered the family.

For his part, Shirley served as a firefighter and paramedic for the City of Des Moines for four years. In 2007, while performing ice water training, he aspirated ice water into his lungs that caused severe scarring.

Due to the injury, he was forced to medically retire in 2009 and, following years of treatments, received a bilateral lung transplant in 2017.

Following his career as a first responder, Shirley pursued his passion for coaching softball and has served as Clarke University's head softball coach since 2018.

The idea of a service dog never crossed his mind until a change in medication last fall caused chronic lung rejection. Doctors were able to halt the rejection but could not reverse the damage, and Shirley's breathing became more difficult.

"We had a couple times where, for example, I was mowing, and it got to the point where I couldn't breathe," he said.

At a suggestion from his fiancee, Angie McGuire, Shirley applied for a dog through IOWA Service Dogs.

Now, Smitty can recognize when Shirley is short of breath and can bring help or an oxygen tank if needed.

It is a different role than the one Doc plays for Vincent, but an equally important one, according to Vincent's wife, Julie.

"There's invisible wounds here in both of these guys," she said.

Shirley and Vincent were selected to receive service dogs after completing multiple applications and months of training with IOWA Service Dogs. They learned about dog behaviors and body language, laws surrounding service dogs and more.

"We trained so much, I got tired of it. That's how I knew it was good," said Shirley.

Fisher said the nonprofit's dogs come from select breeders and must pass health and aptitude testing. When considering health care, food, training and supplies, each dog costs IOWA Service Dogs about $20,000 to prepare for service life.

Doc and Smitty spent two years working with volunteer guardians and trainers, with Shirley and Vincent joining them for classes in the final six months.

The men continue the dogs' training with daily practice of the commands, and coordinators from IOWA Service Dogs will check in with them regularly.

Both men emphasized the depth of the dogs' training and the discipline required to serve their owner on an almost-constant basis. They said it is that intense instruction that sets dogs like Doc and Smitty apart from emotional support animals.

"These dogs work from the time they're puppies until they retire," Vincent said.