Sam Yossifides, a Canton, Ohio, WWII veteran, turned 100 on Dec. 4, 2021. His friends joke that everyone, including famous people, know who he is. (John Stone, Eyeclectic Photograpy as Therapy/TNS)

“Sam was putting on the back nine when Tiger Woods walks by:

Sam takes a trip to Hollywood, where he runs into Clint Eastwood:

Sam flies to Rome to visit the pope. As they walked along in the Vatican Gardens, the Lord looks down and asks:

Earlier this month, Stone threw Sam Yossifides, the man he calls his godfather, a weeklong 100th birthday celebration with balloons, a birthday cake and a week’s worth of cards.

Sometimes, family is not who you’re related to, but who you love. Stone said Yossifides has been a part of his family’s life for as long as he can remember.

Yossifides, who never married or had children, lives with Stone and his grandmother, Dorothy Reed.

“He’s a godfather in every sense of the word,” Stone said. “He’s our family. I’ve known him all my life.”

Yossifides was born on Dec. 4, 1921, in Canton, a booming city of more than 100,000. One in every five Canton residents was an immigrant, including Yossifides’ late parents, Harry and Christina, Turkish Greeks who arrived here from Asia Minor.

“My parents were really loving to me,” said Yossifides, the lone survivor of three siblings. “They kept us close and made sure everything was OK.”

The Yossifides were part of the 10th Street NE neighborhood — a melting pot of blue-collar Greek, Portuguese, Romanians and others — sandwiched between Nimishillen Park and Carnahan Avenue NE, now known as Marion Motley Avenue.

“It was a large city; it was humming, busy,” Yossifides said of his hometown. 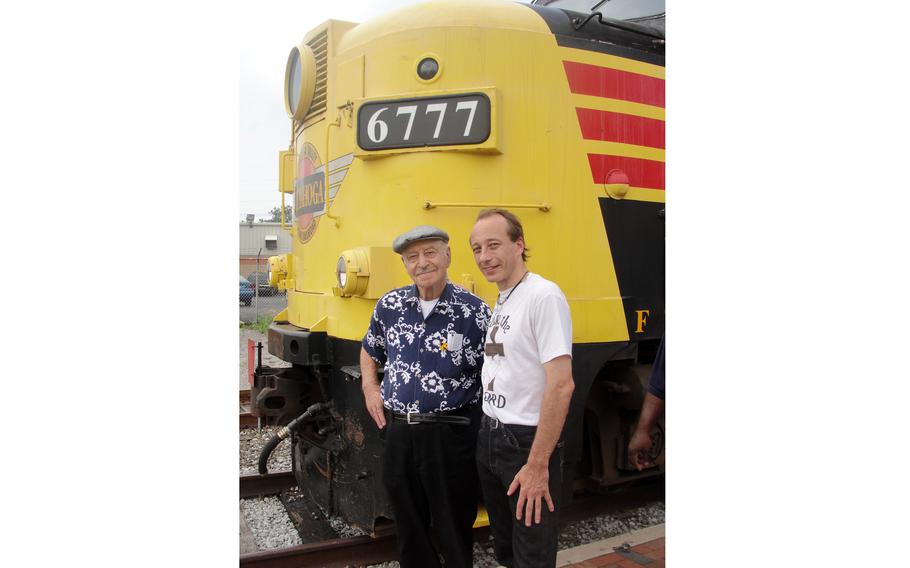 “Sam tells me about lying on the grass at Nimisilla Park and watching bands,” Stone said. “That was the place to be.”

At the center of Greek life was Holy Trinity Greek Orthodox Church, which moved in the 1960s. Hand-built by the men of the community, the old church was razed earlier this year after it caught fire.

“My dad also delivered milk by horse and buggy,” Yossifides said. “We had a cow, also.”

‘I sold newspapers on the street corners.’

Yossifides said his family moved to Philadelphia when he was around 12 — his older brother secured a job making enough to support them all.

“I sold newspapers on the street corners,” he said, smiling at the memory. “I stayed busy.”

By the time the family returned to Canton, Yossifides was a young man in his 20s who got a job at Republic Steel. When World War II broke out, he joined the Navy.

“I was a medic; I served with the Marines,” he recalled. “I served around four years, from the beginning of the war until the end. The last place we served was Iwo Jima. I was 24.”

Stone said they were watching a documentary about Iwo Jima on TV when Yossifides casually mentioned that he witnessed what became an iconic moment when a group of Marines raised an American flag on a jagged hillside on the Japanese island, marking victory in one of the bloodiest battles of the war.

Yossifides also worked as a driving-test instructor and for 20 years as a Stark County deputy under the late Sheriff George Papadopoulos.

“The way he treated people in jail, he was never judgmental,” Stone said of Yossifides. “He’s always been so giving. Everything he says defines his character. I’ve seen it often when someone will come up excited and see him. They’ll say ‘If if it wasn’t for him, I don’t know what I would be.’”

Cynde Reed, who has known Yossifides since she 10, views him as a father figure.

“He’s the most caring person I’ve ever known,” she said. “My parents divorced when I was a baby, and I was not close to my dad. I call him ‘Daddy Sam.’ I tell him, ‘You’re the only dad I know. He has such a positive attitude. He has that Christmas spirit all year long.”

Yossifides attributes his longevity to “clean and healthy living.”

“I used to be pretty athletic. I was into it pretty good,” he said. “I played baseball.”

Asked for his advice on how Canton can thrive, Yossifides said the answer is simple.

“Be more friendly with each other,” he said. “Be more considerate.”

Stone reminded Yossifides of his motto: “He likes to say, ‘Every day is beautiful.’”