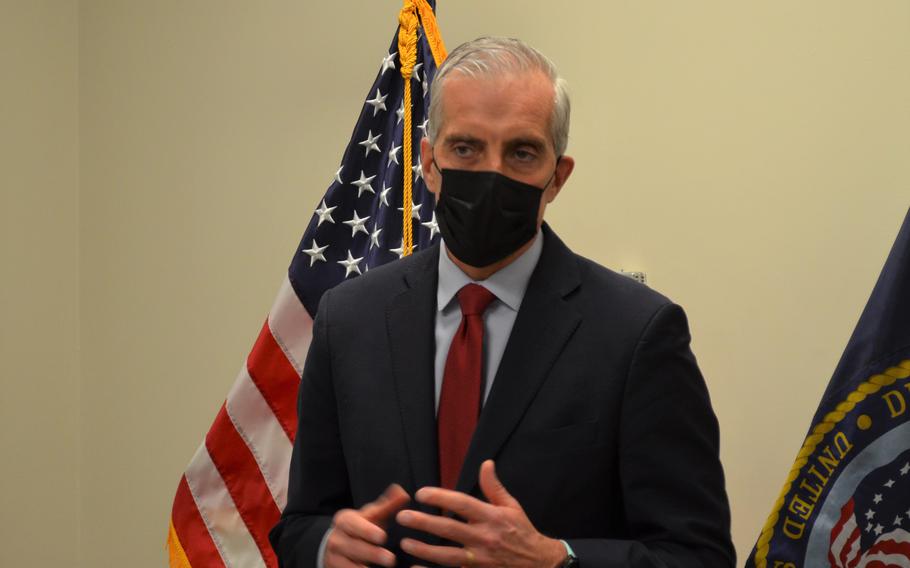 SAN ANTONIO, Texas – The growing veterans population in the southern region of the United States is forcing the Department of Veterans Affairs to reassess how it manages and expands its health care facilities throughout the country, VA Secretary Denis McDonough said Thursday.

As part of a national tour that’s taken McDonough to 23 states, he spent Thursday visiting VA hospitals, cemeteries and Vet Centers in Texas. His first stop was the South Texas Veterans Health Care System in San Antonio, which has seen a 15% increase in patients in the past two years. It’s now the fastest growing VA facility in the country, he said.

Market assessments show veterans appear to be moving to the South and West, particularly to Texas, California, Arizona and Florida, McDonough said. This has caused the VA to begin evaluating its resources to determine how they could shift them to better suit the demand in those areas.

The VA will submit a report in January to a congressionally approved commission that will spend 2022 evaluating the report and making proposals.

It could mean some resources move from one location to another, though McDonough said he expects pushback from Congress and communities that could see their resources downsized or moved to another location.

“It's a very real problem, but the thing that I think is most important for our veterans and our health care providers to know is that our commitment to our veterans is rock solid wherever you live,” McDonough said. “It may be that the mode of care that we provide changes, but the fact of care and the fact of the presence will not.”

During those changes, he said it will be important to expand the options available to women veterans, who are now enrolling at the VA at nearly the same rate as men, 44% to 49%, respectively.

In San Antonio, women are the fastest growing demographic at the VA, which is in part because women make up about 12% of the veteran population in Texas. That national average is 9%, McDonough said.

“It's also a harbinger of what we will see, including a tripling up to 30% of our veterans just over the next decade and a half or so, which is why it's so important that we're increasing access to gender specific care,” he said. The VA has already added a women’s services coordinator to each facility, but the agency is looking at ways to offer child care during appointments as a means to encourage women to choose the VA, McDonough said.

Overall, only about 9 million of the nation’s 19 million veterans choose to go to the VA for health care.

Meanwhile, the Veterans Benefits Administration is also dealing with increased demand. McDonough has already pledged to hire about 2,000 new workers to help reduce the backlog of claims, which has grown to about 260,000. A backlogged claim is one that has been waiting more than 120 days for assessment.

The VA has hired about 900 personnel so far. McDonough said he anticipates they will get all 2,000 new personnel trained and rating claims by the end of the spring, and the backlog will be below 100,000 by 2024.

That backlog, in part, increased because of a new eligibility afforded veterans of the Vietnam War who are diagnosed with hypothyroidism, Parkinson’s-like symptoms and bladder cancer, McDonough said.

He said he is concerned the timeline could be impacted as the VA considers expanding the types of illnesses connected to toxic exposure.

During conflicts of the past 30 years, the military often used open-air burn pits to dispose of waste, which meant toxic plumes of smoke blew around bases. Veterans diagnosed with cancer, respiratory issues and lung disease at young ages have blamed the pits for exposing them to airborne toxins. They have sought VA benefits and health care, but the department contended for years that there wasn’t sufficient evidence to support their claims.

Last year, the VA added asthma, rhinitis and sinusitis as conditions presumed to be caused by the exposure and President Joe Biden has asked the VA to research if several rare respiratory cancers and constrictive bronchiolitis could also be connected.

In Texas, McDonough said there are also serious discussions about building a new VA hospital south of San Antonio in what’s known as the Rio Grande Valley.

“We're having, believe me, intensive, top-to-bottom discussions about where we need facilities, where our facilities need to be updated, and where facilities may be overweighted,” he said. “We've talked about our infrastructure needs in every market in the country.”