A comparison of a clay model done of remains found in Twinsburg in 1982 with a photo of Frank Little from the Cleveland Metropolitan School District. (Twinsburg Police Department/TNS)

TWINSBURG, Ohio (Tribune News Service) — Investigators have identified a man whose skeletal remains were found nearly 40 years ago in Twinsburg.

His name is Frank "Frankie" Little Jr. and he was a songwriter and guitarist for The O'Jays in the 1960s, as well as an Army veteran who served in the Vietnam War. The R&B group started in Canton and made it into the Rock and Roll Hall of Fame.

Investigators discovered Little's identity with the help of DNA and genealogical research. The breakthrough followed years of failed attempts that included the state crime lab making a clay model of the man's skull.

"I'm very excited we were able to put a name to these remains and to get him back to his family and give his family that piece of closure," said Summit County Medical Examiner Lisa Kohler, who assisted Twinsburg detectives with the investigation.

The family was also pleased to learn — after all these years — what happened to Little.

"It's amazing," said Margaret O'Sullivan, Little's cousin, who lives in Cleveland. "We're glad that we have closure now. We know he's deceased."

The next step will be trying to figure out who killed Little and how his remains ended up in a garbage bag behind a Twinsburg business in February 1982. Kohler said his death, originally deemed "undetermined," will be ruled a homicide.

Little, who would be 78 if he was still alive, was born in Cleveland in 1943. He was with the O'Jays in the mid-60s, writing several songs, including "Do the Jerk" and "Oh, How You Hurt Me." The band is best known for its hits that include "Love Train."

Little served in the U.S. Army for two years, including in the Vietnam War. He was last known to live in the area of East 105th Street and Superior Avenue in Cleveland and it is believed he was alive into at least the mid-1970s. Not much is known about his disappearance.

Employees of a now-closed machine shop on Cannon Road in Twinsburg found a skull in February 1982 when they were dumping shavings in the woods. They weren't sure what they'd found.

"When they saw the skull, they didn't believe it was human," Twinsburg detective Eric Hendershott said. "They showed it around."

The employees alerted police and a search of the property turned up a garbage bag with more remains.

The remains, which weren't a complete set, were determined to be those of a Black male, 20 to 35 years old, about 5-foot, 6-inches tall who may have had adolescent kyphosis, which is a curvature of the spine.

A forensic anthropologist estimated the remains had been there between two and four years. The remains had nothing with them that would help police identify the man.

"There wasn't even clothing - just bones in a garbage bag," Hendershott said.

Detectives issued a press release and appealed to the public and other local law enforcement agencies for assistance. They ruled out a few leads and the case went cold for more than 20 years. 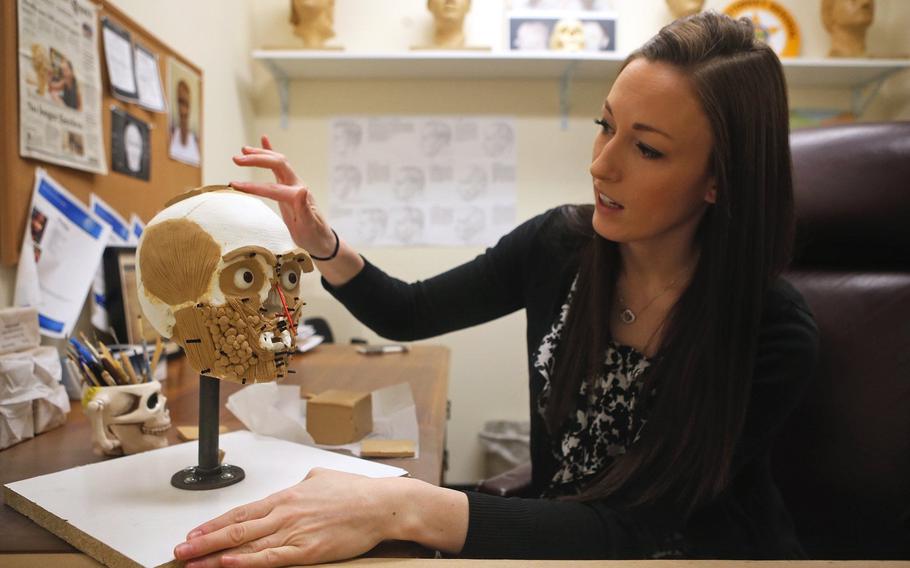 Sgt. Greg Feketik reopened the case in 2009, researching the idea of using DNA to determine the man's identity.

The man's DNA was put into the Combined DNA Index System (CODIS), the FBI's DNA database, but this produced no hits.

A Kent State professor made a sketch of the skull to show what the man looked like. In 2016, Samantha Molnar, a forensic artist with the Ohio Bureau of Criminal Investigation (BCI), made a clay model of the skull.

In October 2018, Akron detectives reached out to Twinsburg, wondering if the remains might belong to a missing person from Akron. That tip didn't pan out, but it lit a fire in Hendershott to make another attempt to identify the remains.

"It occurred to me that time's ticking," he said. "Soon enough, people won't be alive to remember him."

Hendershott knew that Joseph DeAngelo, the Golden State Killer, had been identified through DNA and the use of genealogical databases and another case in Eastlake had been solved this way. He wondered if the same technique could be used for Twinburg's oldest unsolved case.

"I was hopeful," he said. "I was never certain or confident."

Hendershott reached out to the DNA Doe Project in September 2019 to help with the effort. The nonprofit group uses genetic genealogy to help identify John Does and Jane Does nationwide.

Elias Chan and other volunteers with the Doe Project compared the DNA profile of the remains with profiles in GedMatch and Family Tree DNA, two public genealogy databases. From there, they began to build family trees to try to find potential family members of the man.

The researchers zeroed in on the name Little and provided several names to Hendershott.

Hendershott called O'Sullivan and found out that she had a cousin, Frank Little, who had disappeared. She didn't know much about him but said he had a brother who lived in Georgia.

"We were wondering what happened to him," O'Sullivan said.

Hendershott reached the brother and obtained a DNA sample from him.

The sample was analyzed by BCI researchers and Kohler, who confirmed Little's identity.

Chan, who has worked on about 25 cases involving missing persons, with identifications made in 10 of them, was pleased Little was identified.

"It's very exciting, especially for these long cases," Chan said.

Chan said people can help solve missing person's cases by entering their DNA into one of the public databases, especially if they have someone in their family who disappeared.

"That will help bring your loved one home faster," Chan said.

Little had a daughter who died in 2012 and a son who is thought to still be alive and living in the Cleveland area.

Hendershott is hoping to track down the son to see if he might have more information about what have happened to his father. He said Little's brother didn't stay in contact with his nephew or even know his full name.

The detective said Little's brother recalled the last conversation he had with Little but not much else.

Hendershott said he confirmed with Walter Williams, one of the still-living members of the O'Jays, that Little was a guitarist and songwriter with the band. He said Williams told him that Little wrote songs with Eddie Levert, another original band member.

O'Sullivan, 79, said she went to see Little perform in Cleveland once but didn't realize he was with the O'Jay's until much later.

"To me, all rock-and-roll sounds good," said O'Sullivan, who was about 16 when she saw the band.

O'Sullivan said she isn't sure when the family lost touch with Little.

"Part of the mystery is over with, but we have no idea how he got there, how he disappeared or where he lived toward the end of his life," the detective said.

Kohler said she plans to rule Little's death a homicide, based on blunt-force injuries identified by the forensic anthropologist and the attempt to conceal his remains. She said she will finish Little's death certificate once his family members choose a funeral home and make arrangements.

As for determining who killed Little, Kohler said, that will fall to the detectives. She said her office will be happy to help when called upon.

"Detectives will have to look at what they've got and decide if there's anything more they can pursue," she said.