MASSILLON, Ohio (Tribune News Service) — Sharply dressed, 98-year-old Guy Atkinson sat with some of his closest and dearest friends for a Friday night out at their weekly spot.

He was humble and humorous.

Atkinson also was "somewhat embarrassed" but in a good way by unexpected prestige and esteem that friends and special guests lavished on him.

The friends and guests paid tribute to the World War II veteran for his service time in the Army from 1943 to 1945 with a celebration at Massillon Eagles #190.

Sue Simmons with the Quilts of Valor Foundation presented Atkinson with a handmade quilt.

"We are grateful for your service and sacrifice in defense of our country," she said. 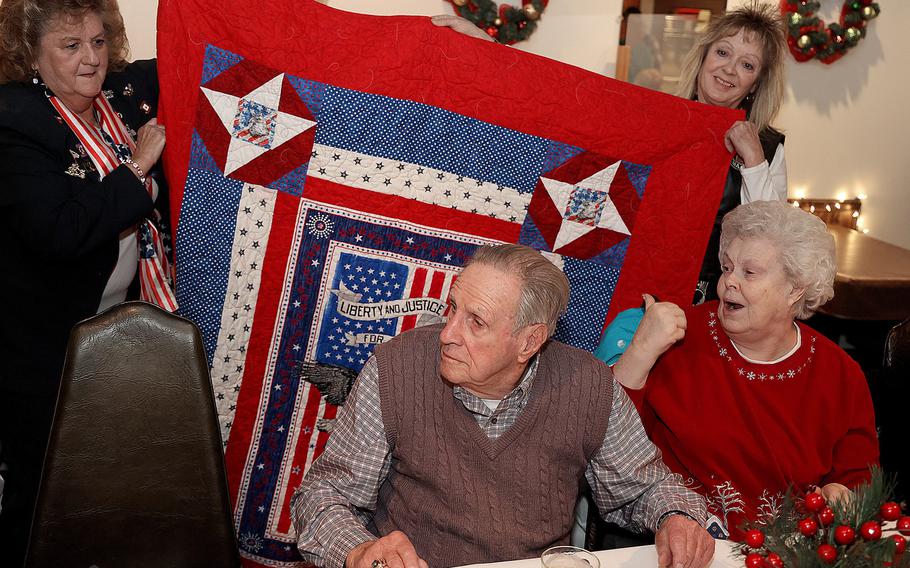 World War II veteran Guy Atkinson, 98, of Massillon is surprised with a handmade quilt from the Quilts of Valor Foundation while having dinner with friends Friday at the Massillon Eagles #190 club. His daughter Betsy Atkinson is seated to his right. (Kevin Whitlock / Massillon Independent)

Atkinson was one of seven brothers who were in the military. Five served in WWII. Two were in the Korean War. He also had a sister.

Atkinson said he followed his older brother Larry, who died in 2012, into the service.

"I always admired him," he said.

In 1944, Atkinson was wounded in France and taken prisoner by Germans. He was held in Stalag VII-A, the largest prison camp, until his liberation in 1945.

After the war, Atkinson was a funeral director for Atkinson Feucht in Massillon (now Atkinson Feucht Hare) and a Lions Club member and Lions Show performer, among other activities.

"Is there a list of ones you didn't get?" joked retired Massillon Municipal Judge Richard Kettler, another special guest.

Kettler, an Air Force veteran and pilot in the Vietnam War, presented Atkinson with a proclamation for Mayor Kathy Catazaro-Perry.

The mayor could not attend due to an illness but her proclamation declared Dec. 10, 2021, as "Guy Atkinson Day" in Massillon.

"You are a hero," Kettler told Atkinson.

Atkinson also received a Certificate of Special Congressional Recognition from U.S. Rep. Anthony Gonzalez, R- Rocky River, and a challenge coin or medallion. He also received several other medallions and a $100 gift certificate from Eagles #190.

"They said so many nice things about me," Atkinson said after the presentations. "I wondered who the hell they were talking about."

‘He’s such a gentleman’

Margy Vogt, a local author and historian, has been friends with Atkinson for years. They were members of the former Massillon Club, now closed.

Since it closed, Atkinson, Vogt and other former Massillon Club members have met every Friday night at Eagles #190 — except in 2020 — for conversation and dinner.

Knowing this, another friend Susan Gessner arranged the tribute for Atkinson. Vogt said the entire celebration was organized within a week.

Guy Atkinson said he was surprised.

"He's such a gentleman," Vogt said.