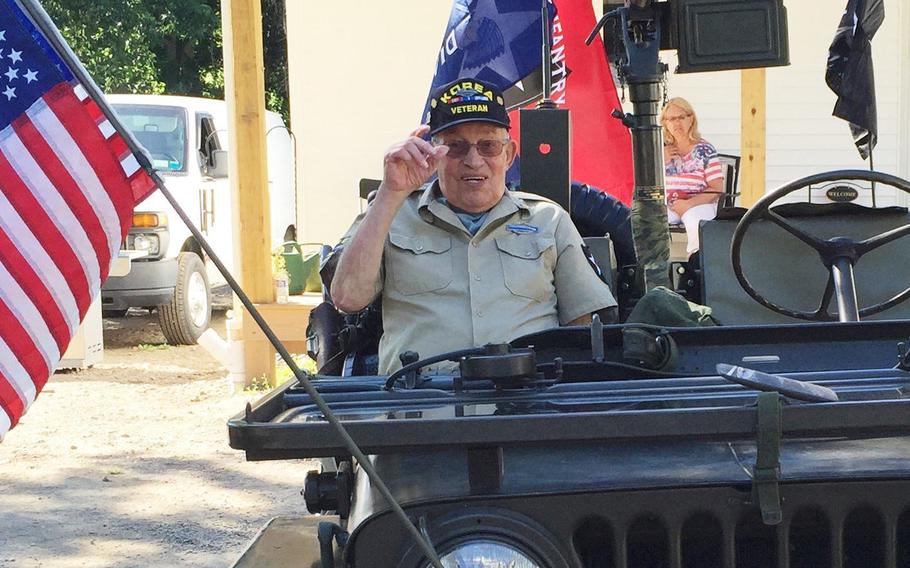 Korean War veteran and longtime veterans advocate Ralph Calabrese sits in an Army Jeep he often rode in during Fourth of July and Memorial Day parades. Calabrese who is credited with helping to save the Canandaigua VA Medical Center when it was slated to close, died Dec. 5, 2021. He was 92 (Courtesy photo)

CANADAIGUA, N.Y. (Tribune News Service) — Today, the Canandaigua Veterans Affairs Medical Center exhibits a vibrancy and growth proved by the presence of construction vehicles and workers busily finishing up one job and moving to the next.

But years ago, word got out into the Canandaigua community that the decision makers from Washington, D.C. who recommended its closing were coming to the city for hearings.

Former Mayor Ellen Polimeni remembers how so many people lined up and down Fort Hill Avenue leading into the campus — students, city residents, and people who understood the importance of what was happening — cheering on Ralph Calabrese, an Army veteran of the Korean War, veterans advocate and Canandaigua family man who took it upon himself to lead the way in saving the VA Medical Center.

A Geneva native, Mr. Calabrese, 92, died Dec. 5 at the same facility he helped save.

Here’s what was at stake: When the U.S. Department of Veterans Affairs formally revealed a plan to close the Canandaigua VA Medical Center, the facility then served 16,000 veterans and employed 700 people. The closure would have relocated 200 inpatients and thousands more outpatients to VA hospitals in Batavia, Bath, Buffalo and Syracuse.

On inducting him into the New York State Senate Veterans Hall of Fame in 2012, then state Sen. Michael Nozzolio noted Mr. Calabrese’s efforts in starting a grassroots letter-writing initiative that generated over 100,000 submissions, his organization of huge community rallies and presenting the community’s case in support of the Medical Center at the VA’s hearings on hospital closings.

A commission ultimately recommended the Canandaigua VA Medical Center — the hospital opened in the city in 1933 — remain open.

Not only was it spared, VA Finger Lakes Healthcare System Medical Center Director Bruce Tucker — who said in a statement that he and staff were saddened at Mr. Calabrese’s passing — acknowledged that his efforts are part of the history that has resulted in over $350 million in new construction and renovation on the campus that will provide the veteran community with the most modern primary care and specialty services, as well as new home-like environments for domiciliary patients and nursing home residents of the community living centers.

“When I see the incredible upgrades to the VAMC that have come about in recent years, I reflect that we owe Ralph a debt of gratitude for being the spark that led to all of the benefits from there that we have today,” said Rodney Dutton, adjutant of the Disabled American Veterans Chapter 4 Canandaigua and Finger Lakes, of which Mr. Calabrese was a charter member and served for 40 years.

Yet, friends and family say he was very good about sharing his gratitude and his feelings to people who were supportive.

“He was just always thankful,” Polimeni said. “He really did not take a great deal of credit for all that he had done.

Jeremy Marshall, who is director of the Ontario County Veterans Service Agency, said the news of his death came “like a punch to the stomach.” He remembers the times he and Mr. Calabrese, who once hosted a show on veterans issues on Finger Lakes TV, would talk. As often was the case, the issues facing veterans would come up — and Mr. Calabrese always advocated for them, Marshall said.

“When it comes to veterans, he’s larger than life,” Marshall said. “He did so much to keep the VA open, but he was much more than that. He devoted his life to taking care of veterans.”

Dutton said Mr. Calabrese is a “once-in-a-generation kind of guy” whose fervor for veterans — a friend to all veterans regardless of branch or era of service — and ability to inspire others to action will likely never be duplicated. In his obituary, his family described him as “a formidable personality with the heart of a lion.”

“When I describe him to someone who may not know him, I always say, ‘He saved the Canandaigua VAMC’ back in the day by nearly single-handedly organizing a protest to avoid its planned closure,” Dutton said. “He brought local, regional and national names together, from bikers to congressmen and the press.”

Mr. Calabrese served for two years with the 2nd Infantry Division in Korea. For his valor and meritorious service during the conflict, he received a number of decorations, including a Bronze Service Star, the Korean Service Medal and the Combat Infantry Badge.

Mr. Calabrese, who worked in construction on his return home from war, and his late wife Carmella had three sons and several grandchildren and great-grandchildren. He was recognized countless times over his lifetime by several different veterans and community groups, earning the Canandaigua Chamber of Commerce’s Mr. Canandaigua honor, which is an achievement award recognizing years of service to the community. He also received a degree from the Canandaigua City School District for his support of students, and was honored by U.S. Sens. Hillary Clinton and Charles Schumer, among many others. He received the Congressional Certificate of Commendation, and a flag flown over the U.S. Capitol was presented to him in 2016.

State Sen. Pam Helming, R-Canandaigua, wrote that Mr. Calabrese presented her with a poem he wrote, “A Veterans Prayer,” which hangs in her office. She, Mr. Calabrese and Canandaigua Athletic Director Jim Simmons coordinated football players and cheerleaders escorting veterans from the VA to Canandaigua Braves football games, Helming recalled.

“Ralph taught young people the importance of honoring our veterans,” Helming wrote in a column. “He inspired them to know and appreciate their sacrifice and contributions.”

Mr. Calabrese was credited, in collaboration with then Congressman Amo Houghton, with creating the Finger Lakes Advocacy Council (also known as Finger Lakes Advisory Council) in 2003. The council, which is active today, and is recognized by the VA as the Finger Lakes Community Veterans Engagement Board, serves a mission of fostering productive collaborations among a diverse range of stakeholders in the community and provides direct and open lines of communication between the VA and advocates of veteran healthcare, Tucker said.

Mr. Calabrese also was well known at the Canandaigua VA Medical Center and to the veterans who received care there, Tucker said. He volunteered in chaplain service, accruing 4,400 volunteer hours.

“ Mr. Calabrese was not just an advocate for veterans’ healthcare services, he also was an outspoken advocate for patriotism and national pride,” Tucker said in the statement. “He will be remembered and missed by many.”

Canandaigua Mayor Bob Palumbo said Mr. Calabrese’s history is amazing, but he also said he was “an all-around good guy.”

“I’m very thankful for everything he’s done for Canandaigua and the country,” Palumbo said.

Former Farmington Supervisor Ted Fafinksi, who is retired from the U.S. Air Force, called his dear friend “a veterans veteran” for his significant role in saving the Canandaigua VAMC from being eliminated by Washington bureaucracy.

“Every veteran treated today in Canandaigua can be thankful to the efforts of this advocate,” Fafinski said. “I will personally miss him. May he rest in peace for a job well done.”

Because of the nature of Marshall’s job, every time a veteran passes away, his office is notified by the ringing of the fax machine, alerting him of notices sent over from the funeral home.

Receiving the news of Mr. Calabrese’s death, Marshall said, stopped him in his tracks. Everyone seemed to know him or of him, and he had this aura that he would be around forever.

Over time, great deeds outlive the man and embolden the memories of a battle well fought and won. In the moment, however, grief.

“You stop and reflect for a minute,” Marshall said. “It’s the end of an era.”