Congressman, Calif. woman searching for family of Korean War POW whose scrapbook was left behind at a middle school This portrait of Sgt. William F. Maus, a POW during the Korean War, was included in a scrapbook left at a Modesto, Calif. school. (Karla McCleskey)

His family doesn’t have it.

Stanislaus County resident Karla McCleskey believes the scrapbook was left on her desk at Ustach Middle School in Sylvan Unified School District about 12 to 15 years ago. She’s working with a veterans advocate and Rep. Josh Harder’s office to reunite the relic with the family of William F. Maus.

“I was absolutely devastated that it was forgotten about,” McCleskey said. “This has to mean so much to somebody’s family.”

Genealogy research done online indicates Maus was born in San Francisco in 1929. He served in the Korean War as a sergeant in the 2nd Engineer Combat Battalion, 2nd Infantry Division, according to the website Military Hall of Honor. He was awarded the Purple Heart, Prisoner of War Medal and Korean Service Medal, among other honors.

Maus was missing in action for several months beginning Nov. 30, 1950, according to letters in the scrapbook from U.S. Army major generals. McCleskey said the last page of the scrapbook confirms Maus died in 1951 while in captivity in North Korea.

He was buried in 1955 at Golden Gate National Cemetery in San Bruno, California.

McCleskey worked as secretary to the vice principals at Ustach Middle School in Modesto. Lost items like sweaters and homework would pile up in her office near the front door.

She said a student likely forgot the scrapbook at school, and a teacher dropped it on her desk. It had no note to indicate the student’s and teacher’s names.

The scrapbook became “out of sight, out of mind,” stuffed in a desk drawer and boxed up as McCleskey moved office spaces. 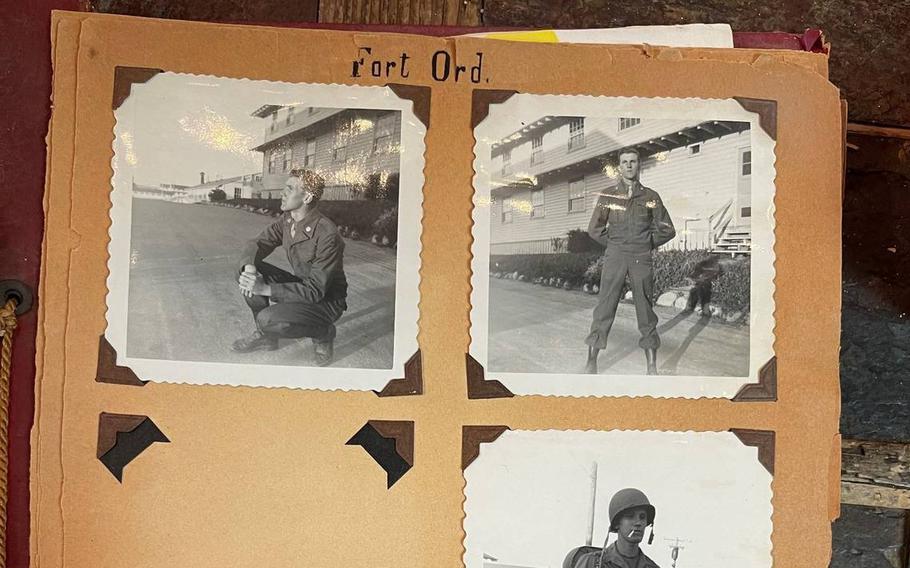 A page from a scrapbook shows photos of Sgt. William F. Maus, a POW during the Korean War. (Karla McCleskey)

“We should have done something a long time ago,” she said.

When she resigned in 2012, her belongings were boxed up and taken to her.

She went through the boxes in early October and found the collection of photographs, articles and letters to Maus’ parents from him and the Army.

“I’m just really surprised nobody ever asked about it,” McCleskey said.

For help finding the family, she turned to Lana Casey, an Oakdale resident who’s on the board of the nonprofit Pacific Project Heroes, which supports veterans and first responders.

Harder said the quest to reunite the scrapbook with Maus’ family is personal. Both of his grandfathers and an uncle served in uniform, he said.

“I know how important it is to hear those stories and really be able to understand our history,” Harder said.

He hopes to identify Maus’ family during the holiday season.

“If this was my grandfather or my uncle,” Harder said, “and we lost this for decades, I would be heartbroken.”

Anyone with information on Maus’ family should contact Harder’s office via email, andrew.mamo@mail.house.gov or CA10JHima@mail.house.gov; phone, 209-579-5458; or website. People also can help by sharing the story via social media.