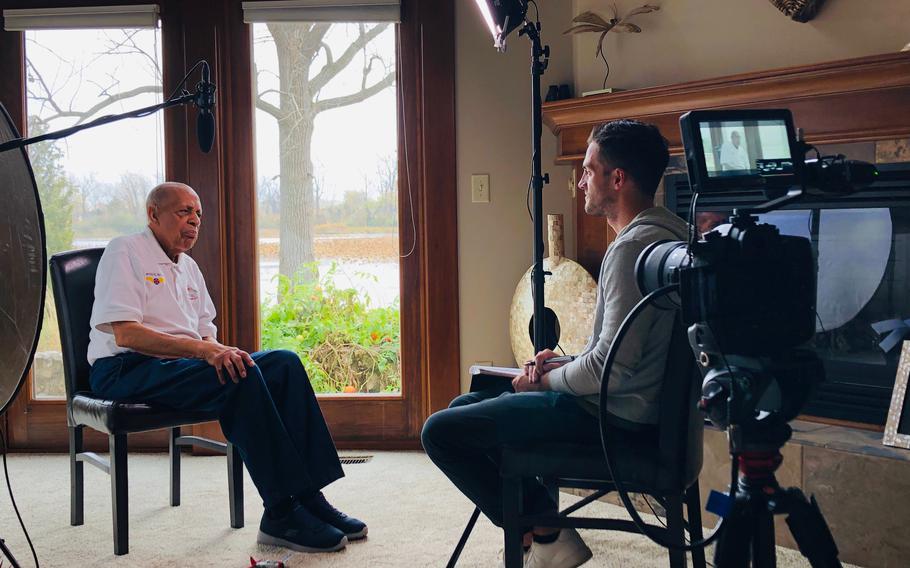 Harold Brown of Port Clinton, Ohio, is a former Tuskegee Airman, who flew 30 missions. He is being interviewed by filmmaker Joshua Scott in his home. (Memoirs of WWII/Joshua and Heather Scott/TNS)

NORTH CANTON, Ohio (Tribune News Service) — Edgar Harrell was the last surviving Marine from the USS Indianapolis that was torpedoed and sunk by a Japanese submarine on July 30, 1945.

Harrell, at 96, died in May in Clarksville, Tenn.

Prior to his death, the World War II veteran shared his story with filmmakers Joshua and Heather Scott of North Canton, who are preserving World War II history.

The Scotts are behind the YouTube channel "Memoirs of WWII," which has more than 314,000 subscribers and at least 21.2 million views. They launched the channel in February 2017.

Their channel is a short film series sharing the real-life accounts of WWII veterans. Harrell's story was the most recent video posted for Veterans Day on Nov. 11.

The Scotts interviewed him two months before his death.

"And I knew what was happening in the Pacific, and I told my dad, 'Dad, I don't want to wait to be drafted. I want in the Marines," Harrell told the Scotts. 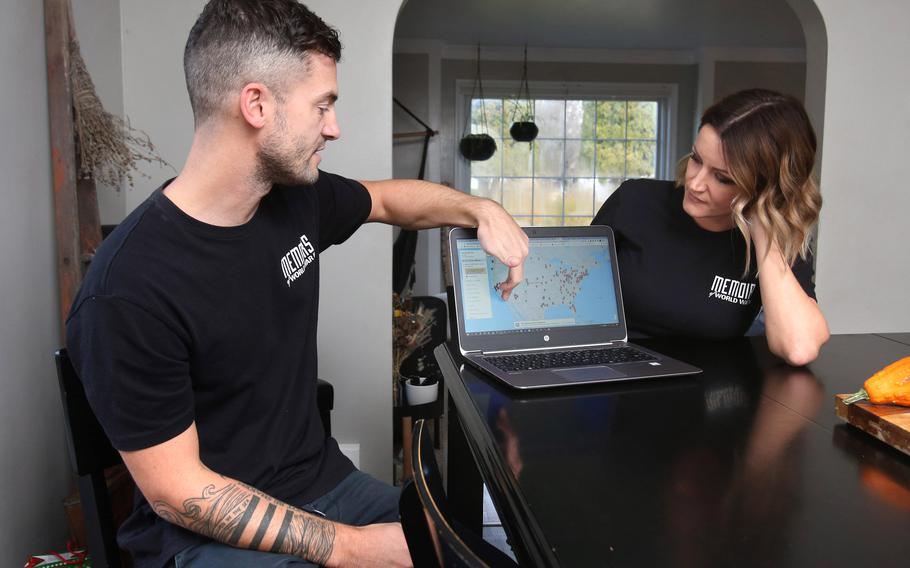 Josh and Heather Scott talk Nov. 22 in their North Canton home about traveling the country filming World War II veterans. Their family shares the stories on a YouTube channel that has more than 300,000 subscribers. (Scott Heckel, Canton Repository/TNS)

Joshua Scott, 38, said their mission is to preserve the history of WWII veterans for younger generations to understand and learn from the "Greatest Generation."

His interest in the subject is deep-rooted with his late grandfather who served in World War II. His grandfather died before he could ask him about the war and that inspired him to start his mission.

According to the U.S. Department of Veteran Affairs, slightly more than 240,000 of the 16 million Americans who served in World War II are still alive.

About 234 veterans are dying every day and the entire WWII generation will likely be gone by 2032. That drives the Scotts to document as many veterans as they can.

"We were in a dire situation and these people stepped up and did their part. So many of them did so much," Joshua Scott said.

Heather Scott, 39, said they have enough interviews and content to produce another 40 videos over the next three years with more expected as they travel the country. 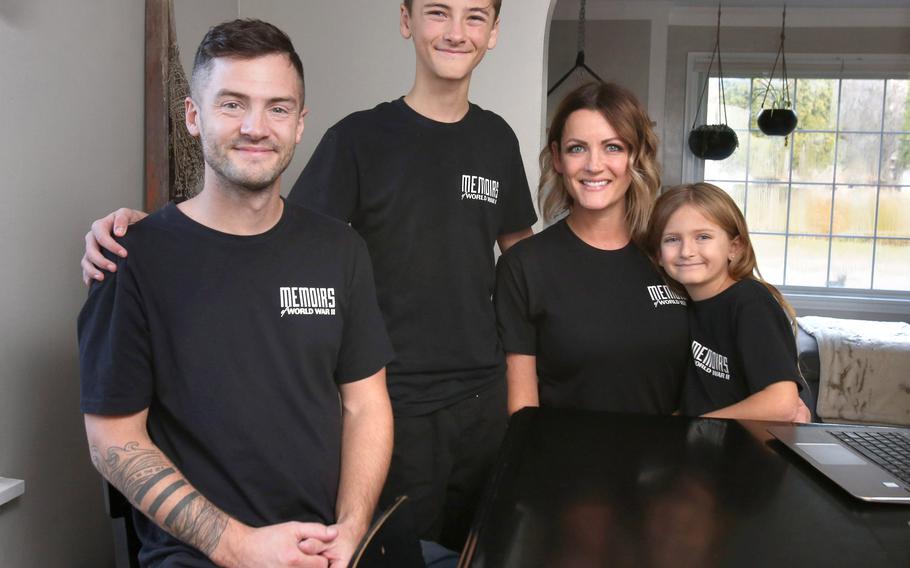 Josh, Logan, Heather and Charli Scott are shown in their home in North Canton on Nov. 22. The family has traveled the country filming World War II veterans and shares the stories on a YouTube channel that has more than 300,000 subscribers. (Scott Heckel, Canton Repository/TNS)

Joshua Scott works full time as the worship experience director at Faith Family Church, where he met his wife. Heather Scott works for her father's company Aquaseal Resurfacing as director of marketing and administration.

They have been married for 15 years and have two children. Their son Logan, 13, and daughter Charli, 7, are homeschooled and help their parents with the YouTube channel.

Logan Scott doesn't always remember the entire interviews but he said he learns something every time.

While the family travels the country for the interviews, the project started in Stark County. 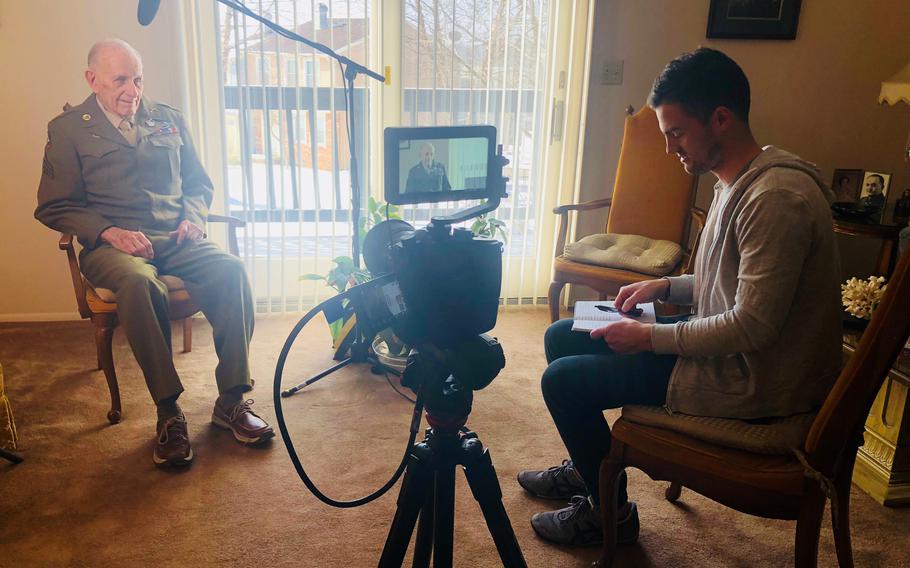 Robert Sabetay of Akron served in World War II and is author of "Memoirs of an American Jewish Soldier: From the Heartland of America to the Frontline of the Third Reich." (Memoirs of WWII/Joshua and Heather Scott/TNS)

Among the local interviews was Adone "Cal" Calderone of Massillon. He passed away Oct. 19, 2020.

Calderone, a Navy sailor, was the last known surviving Pearl Harbor veteran in Stark County. He was 21 years old when the Dec. 7, 1941, attacks occurred.

This year marks the 80th anniversary of the attacks that drew the U.S. into World War II.

The lives of 2,403 U.S. military personnel and civilians were lost after the Imperial Japanese Navy Air Service conducted a surprise attack.

Calderone told his story of survival to the Scotts in a 2018 short film, "WW2 Veteran's Daring Escape from Sinking Ship," for their YouTube channel.

Calderone played tuba and string bass in the Navy band on the USS West Virginia. He was playing on the USS Arizona on Dec. 6, the night before the attacks, for a band contest.

He was invited to stay overnight but declined because of his duties on the USS West Virginia. His bandmates stayed and were killed in the attacks when the USS Arizona sunk.

The West Virginia was also hit by a torpedo and would eventually sink. A few months later, the battleship was raised by a salvage crew.

Calderon told the Scotts: "I can't forget Pearl Harbor. Every day. And if you talk to anybody in combat he'll tell you the same thing. Some guys just shrug it off. Some guys say, 'I think about it every day.' I dreamt about it for a long time."

Heather Scott said a lot of their interviews have come from relatives of WWII veterans who reach out to them through their YouTube channel.

They don't just interview American veterans. They also have videos for a British pilot and a German soldier on their site.

"We want to get every perspective," Joshua Scott said.