‘The water was on fire’: 100-year-old Illinois native survived Pearl Harbor, one of few left 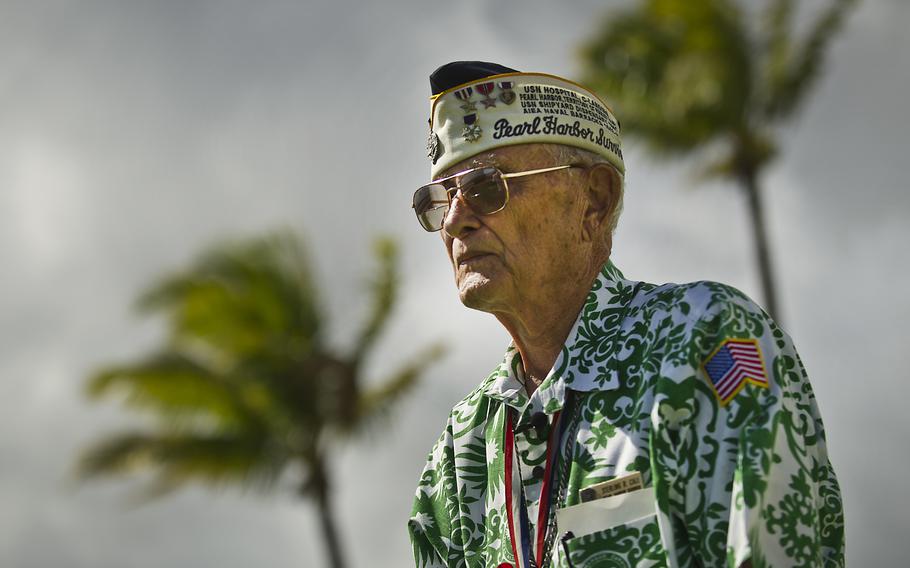 (Tribune News Service) — Raised as a poor farm boy in central Illinois, Sterling Cale longed for a change of fortune and scenery.

The 19-year-old thought he might find both with the Navy. After basic training in 1940, thoughts of young ladies in hula skirts swirled in his head.

“Aw, hell!” he blurted to his superiors. “Give me Pearl Harbor!”

He got his wish. And, eventually, he even got a girl.

In between, though, he fought through the stunning tumult of Dec. 7, 1941.

As bombs and bullets rained down like hellfire, he spent an eternity of hours diving into the flaming harbor to try to save fellow sailors. He lugged out body after body, some alive and others not.

Sterling Cale, who turned 100 recently, is one of an estimated fewer than 100 remaining survivors of attack. At the 80th anniversary of the bombing, it’s worth recalling his story and honor his urging to keep alive the legacy of Pearl Harbor.

He never knew the details of his earliest days, which began Nov. 29, 1921, in Macomb, Ill. He lived in orphanages there and nearby Colchester until age 4, when adopted by Earl and Maida Cale. The family, including two sisters, would live in several burgs in west-central Illinois — Monmouth, New Windsor, Viola and Aledo — before settling in Galesburg, where the elder Cale started a casket-making company.

But crushed by the Depression, he shut down the shop. The family had to sharecrop outside town for a meager $30 a month. The strenuous life made a deep impression on Sterling Cale, who each morning had to milk cows before walking five miles to school.

“It was a lot of work,” he once recalled.

But in Cale’s teen years, his dad caught a break and got hired by John Deere, in Moline. The family moved again, and Cale attended Moline High School. There, his junior year, a Navy recruiter from Chicago showed up, chatting briefly with Cale and his classmates before simply asking, “Anyone want to join up?”

Cale hesitated for only a half-second. With his graduation pending in a year, jobs remained scarce and farm work loomed as a fallback. He shot his arm skyward, catching the recruiter’s eye before yelling, “I do!”

After he graduated high school in 1940, the Navy sent him to San Diego for pharmacy training. Graduating as a hospital pharmacist’s mate, Cale was given options as to his first assignment. One was Hawaii, a faraway place he’d read about in books that seemed almost a fantasy land.

He shuddered with memories of frigid childhood winters in central Illinois. He opted for Hawaii, and soon found himself shipped out to Pearl Harbor. The first day there, with the temperature 40 below in Macomb, the mercury hit 85 at Pearl Harbor.

It felt like heaven. Hell wouldn’t come for a few more months.

Cale was assigned to third-shift duty in the dispensary in the U.S. Naval Hospital, filling prescriptions. At 7 a.m. on Dec. 7, 1941 — a Sunday — Cale ended his shift and strolled to his barracks, about three-fourths of a mile away. Almost home, he glimpsed Battleship Row to see a slew of planes overhead. He figured it was a drill but then paused.

“That’s strange,” he thought to himself. “We don’t train on Sunday.” 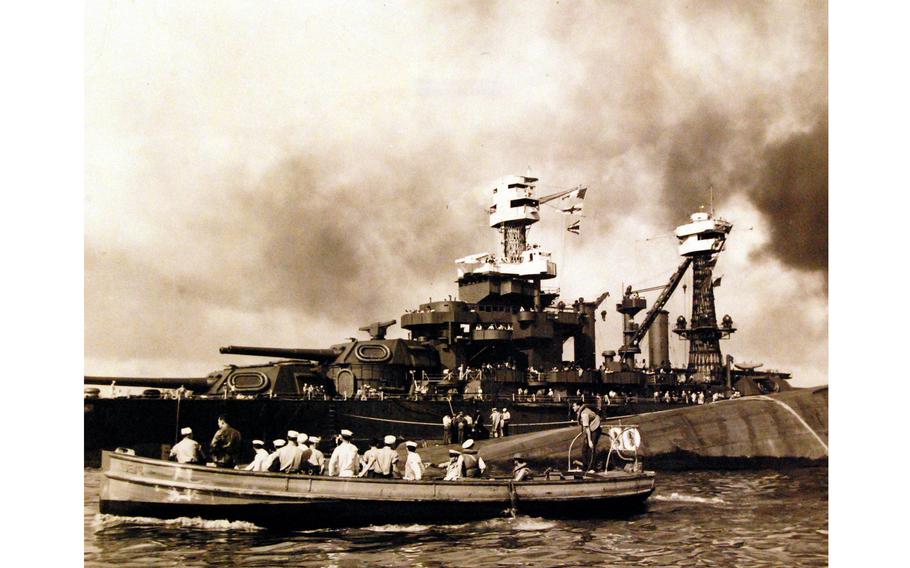 View of "Battleship Row" during or immediately after the Japanese attack on Pearl Harbor on Dec. 7, 1941. The capsized USS Oklahoma is in the center, alongside the USS Maryland. (National Archives) 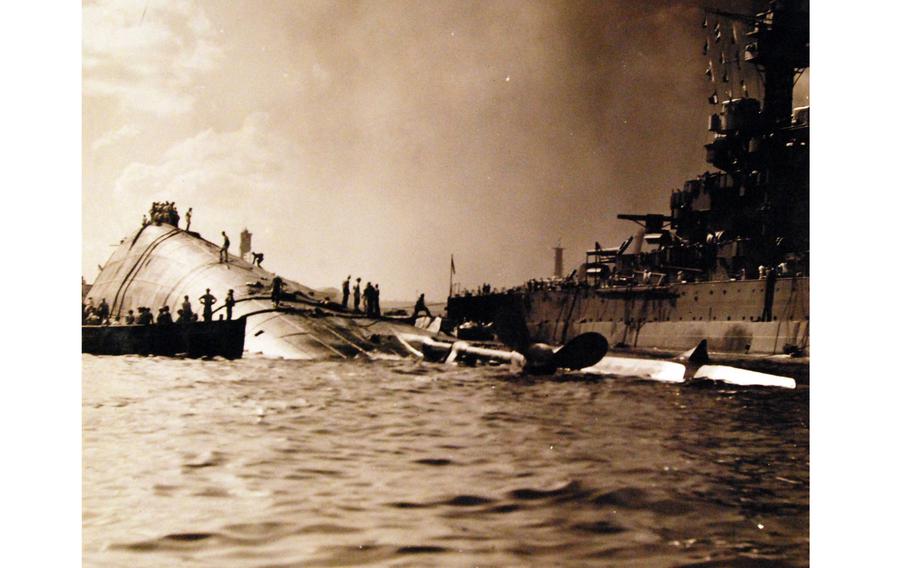 The capsized USS Oklahoma and the USS Maryland are shown after the Dec. 7, 1941, attack. (National Archives)

Cale peered more closely as the planes bore down on the battleships. His eyes widened in shock as he spotted red circles on the wings and fuselages.

“My God!” he cried. “Those are Japanese planes!”

He dashed to an armory and bashed open a locked door. As Japanese bombs began to fall, Cale grabbed the only guns there: old, single-shot rifles. He handed the weapons to other sailors scrambling amid the growing chaos. As they fired bullets skyward, aerial torpedoes plummeted down.

Cale watched in horror as three of the first torpedoes blasted the USS Oklahoma, soon followed by two more. Twelve minutes after the attack began, the ship rolled over, her masts touching bottom and her keel exposed.

As the ship’s surviving crew rushed to the adjacent USS Maryland to help launch anti-aircraft volleys, Cale and others sprinted toward the Oklahoma to help rescue the wounded. As bullets and bombs showered down, oil leaking from the ship sparked and burned in the harbor.

“It was very difficult,” Cale later told the Journal Star. “The water was on fire.”

Cale, who had training as a frogman, dived again and again into the water, trying to save others.

“A lot of the men were dead already,” he recalled. “A few times I got lucky and got to throw a rope to (survivors).”

The attack lasted for about 90 minutes. Still, he kept pulling comrades out of the water.

“Some were badly burned,” he said. “Their skin came off in my hands.”

Over four hours, Cale pulled out 46 men. He never knew how many lived. All told, 429 aboard the Oklahoma died.

Two days later, an admiral — noting Cale’s tireless work on the Oklahoma — told him to round up 10 other sailors and head to the USS Arizona. In the attack, the ship exploded in a terrible roar, then sank. Cale’s team was tasked with finding the remains of crewmen still inside.

The team worked hard for six weeks, recovering whatever they could. Some of the crew had been incinerated by the blast, as if cremated.

“Most of them were just little piles of ashes,” Cale said.

After the bombing, Cale’s military career was just beginning.

Amid other assignments, in 1942, Cale was attached to the 1st Marine Division at Guadalcanal. After the war, though he remained in pharmacology, he switched to the Army for career opportunities. In 1950 and 1951 he saw action with the 5th Regimental Combat Team in Korea. As a sergeant major, he served intermediate duty in Vietnam from 1955 to 1974. Between assignments there, he served with the Defense Language Institute (part of the Department of Defense) in California. Taking time off to get an MBA from Chaminade University in Hawaii in the 1970s, he spent 57 years serving the federal government, retiring in 2005.

Meanwhile, a year after the attack, Cale married one of those lovely gals he’d hoped to meet in Hawaii — though she wasn’t a hula girl. He and Virginia raised two children and enjoyed four grandchildren.

Aside from military assignments, Cale has made Hawaii his home since he first set foot there. In 2005, he started volunteering at the USS Arizona Memorial, thrice weekly talking to visitors about his experiences on Dec. 7, 1941. He’d always honored requests for his autograph, above which he would scrawl the word Illinois.

In 2019, after 77 years of marriage, Cale became a widower. Since then, he has declined most interviews, as part of slower pace, said Emily Pruett, spokeswoman for the National Park Service.

“Sterling is doing well!” Pruett told the Journal Star recently. “ He has slowed his ... volunteering, given his age, health and safety concerns.”

There is no official tally as to the number of Pearl Harbor survivors still alive. However, a report this year in the Des Moines Register estimated there are fewer than 100. At this 80th anniversary of the attack, and in the wake of Sterling Cale’s 100th birthday, his words echo as a warning to not forget the past:

“When we’re gone, there will be no one to tell the story.”

This story includes information from reports in the Galesburg Register-Mail.

Visit the Journal Star at www.PJStar.com