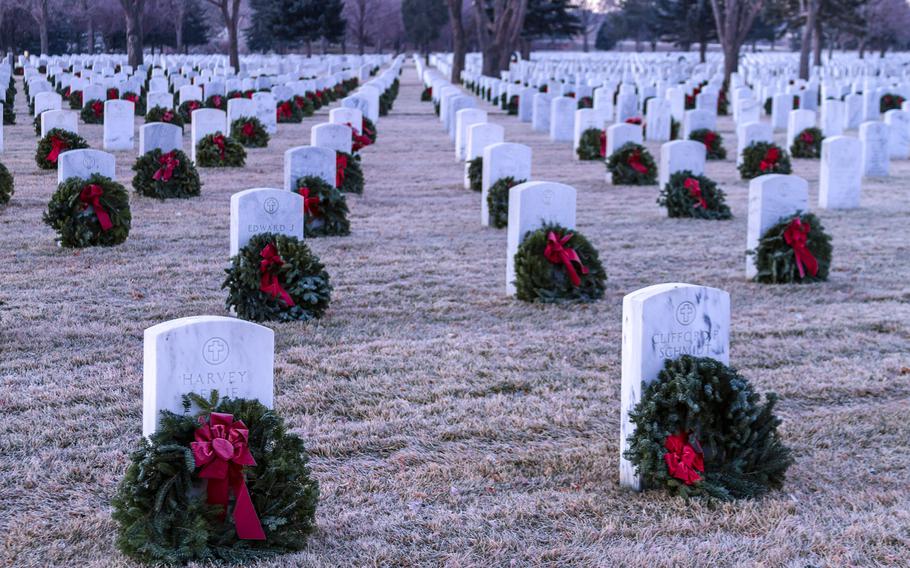 COLORADO SPRINGS, Colo. (Tribune News Service) — A nationwide tradition viewed by some Americans as a patriotic display recognizing service and sacrifice represents for others a sectarian religious symbol amounting to desecration.

Complaints about the popular Wreaths Across America Day, when fresh evergreen wreaths are placed at gravesites of military veterans at national and local cemeteries, are climbing in the weeks leading up to this year’s event, says the founder of a civil rights advocacy organization that’s protesting the practice.

“We have no problem if people reach out and want a wreath on their deceased veterans’ graves, but to put them everywhere, to blanket them without permission of the surviving families is unconstitutional, an atrocity and a disgrace,” said Mikey Weinstein, founder of the Military Religious Freedom Foundation.

The crucifix is at the crux of the opposition.

Weinstein, who is Jewish, and his supporters — who include Jews, Muslims, Buddhists, Sikhs, the Jedi Church as well as Christians — believe the wreath pays homage to Christianity.

“This should be an aspect of respect,” Weinstein said. “It’s almost like a fundamentalist Christian gang sign to put a symbol of the Christian season of Christmas on any grave.”

Amber Caron, spokeswoman for the Maine-headquartered Wreaths Across America, said the wreaths, each hand made of 10 boughs of balsam tied with a red velveteen bow, are veterans’ wreaths, not Christmas wreaths.

“We are not ‘decorating graves’ but honoring American heroes,” she said.

The idea of placing wreaths on deceased military members’ graves began informally at Arlington National Cemetery in December 1992, when a family who owns a wreath-making business in Maine donated their leftover stock to the Army-run cemetery in Virginia.

Since becoming a nonprofit in 2007, Wreaths Across America has expanded to 3,100 burial sites including 145 of 154 National Cemetery Administration properties, Caron said.

Individuals as well as groups such as American Legion posts and Scouting programs, contributed $24.9 million to Wreaths Across America in the fiscal year ending June 30, 2020, tax forms show.

Volunteers are expected to lay nearly 2 million wreaths on graves during this year’s observance on Dec. 18.

The mission, Caron said, is to remember all the fallen, honor those that serve in the military and their families, and teach the next generation the value of freedom.

“To argue that it isn’t a Christian symbol is preposterous,” he said. “Imagine if that was an atheist, Satanic or Jewish symbol.”

Throughout history, wreaths have been laced with symbolism from various cultures, including paganism, and often denote the spiritual belief in life everlasting and the rebirth of the spirit.

Weinstein’s organization requested in 2014 that Wreaths Across America not place wreaths at headstones of departed service members that display the Jewish Star of David, known in Hebrew as Magen David.

Leaving live flowers or wreaths at headstones is normally not a Jewish ritual.

In 2017, a photo circulated with a wreath from the program leaning on a headstone with a Star of David.

Some Jewish families request the wreaths, Caron said, and sometimes, volunteers unintentionally place them at a grave with the Jewish star.

Wreaths Across America’s official policy states that the organization “is not affiliated with any religion or political view,” she pointed out.

The program follows the policies of cemeteries that grant permission for the annual remembrance ceremony, Caron said.

At cemeteries that don’t have formal policies, volunteers “do not place a wreath on the headstones of those graves marked with the Star of David, out of respect for Jewish custom,” the organization’s policy states.

“We simply pause and pay our respects. The only exception is when families of the deceased request a wreath, and then their wishes are honored.”

The federal agency allows Wreaths Across America to set wreaths at gravesites but does not carry out any function of the program, Brophy said. Volunteers do.

But cemetery staff check graves to see if any graves are marked incorrectly, Brophy said.

Anyone who has concerns about gravesite decorations or other issues should contact the cemetery, he said. Fort Logan keeps a list of requests regarding such matters, Brophy said, and abides by them.

“As a general matter of course, for any reason of concern we try to try to reach a mutual accommodation and respect the wishes of families of loved ones interred,” Brophy said.

Weinstein said his organization has received thousands of grievances since Wreaths Across America expanded nationwide 15 years ago.

This year, the office has fielded “an overwhelming number of complaints,” Weinstein said, producing hundreds of angry phone calls, letters and emails about the program.

He’s calling for cemeteries to require families’ permission instead of an opt-out system to address the matter.

Fort Logan, a National Cemetery under the auspices of the Department of Veterans’ Affairs, has not received any complaints, Brophy said.

“It seems to be quite popular,” he said of the wreath-laying event, which this year has raised enough money for volunteers to place 12,000 wreaths at Fort Logan in a yearly rotation so that all graves are periodically covered.

The United States Air Force Academy for the eighth time will place donated wreaths on all 1,350 gravesites on the military installation in Colorado Springs, said spokesman Dean J. Miller.

Wreaths were donated from contributions of Americans nationwide, he said, and are arriving from the Air Force Services Agency in San Antonio, Texas.

“No religious affiliation is associated with wreaths by the Academy and all requests to opt out of such honors received from families of veterans interred at the Academy Cemetery are honored,” Miller said in an email.

The academy’s mortuary affairs officer said in her nearly 30 years in her post, she has “never received a request to opt out from families of interred veterans.”

Sponsorship of the $15 wreaths topped the goal of covering all 2,600 gravesites at the Pikes Peak National Cemetery this year, said Wreaths Across America cemetery coordinator Jennifer Kendig.

She’s a member of the American Legion Ladies Auxiliary in Falcon.

“So many people come out and support this event because it means a lot to honor the veterans that have passed,” Kendig said. “It’s heart-warming to see.”

Fundraising produced enough money to buy more than 3,000 wreaths this year, with the overage offered to other area cemeteries or applied to next year’s ceremony, she said.

Sponsoring organizations receive $5 from every wreath sold, some of which is donated to veterans’ organizations in the Falcon area, she added.

Weinstein said he and his wife started the organization he heads after their children attended the Air Force Academy and were subject to anti-Semitism.

Over the past 16 years, he said his organization has represented nearly 77,000 clients who oppose certain practices pertaining to the military that they believe have religious overtones. Most wish to remain anonymous, Weinstein said, for fear of retribution. But he believes they all have the right to dissent when religion — primarily Christianity — is infused into the military culture and lifestyle.

“People say you’re Scrooge Weinstein, but this is wrong and un-American to assume every veteran would want a wreath on their grave,” he said. “These veterans have given their all for this country, and they can’t fight back now. We’re going to continue fighting for them.”