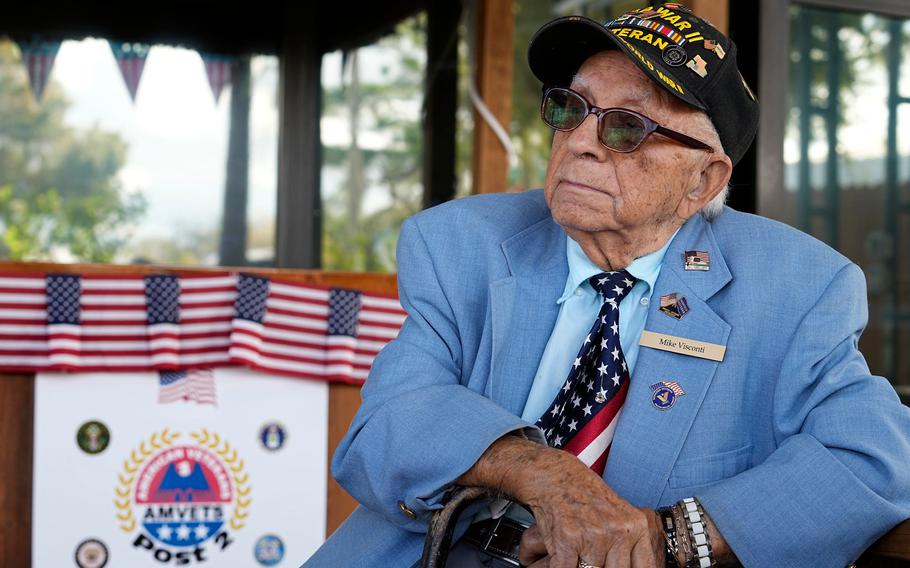 World War II veteran Mike Visconti talks about the impact of the Japanese attack on Pearl Harbor on his decision to join the military at age 17 in 1941. "I went down and enlisted the next day," he said. (Nigel Cook, The Daytona Beach News-Journal/TNS)

That all changed, as it did for so many, in the wake of the surprise dawn attack that propelled the United States into World War II, a day that President Roosevelt once declared would “live in infamy.”

“When they bombed Pearl Harbor, I went down and enlisted the next day,” said Visconti, 97, among the World War II veterans to be honored at a ceremony to commemorate the 80th anniversary of the attack on Sunday at AmVets Post 2 in Edgewater.

“I thought it was my duty to enlist for my country,” said Visconti, who made 200 flights over the Himalaya mountain range in B-24 Liberators shuttling supplies from Burma to China as a private in the U.S. Army Air Corps.

“I was a crew member on a B-24,” Visconti said. “I would ride in the cargo area. There were no seats, so you had to sit on the floor. There were times when we were scared.”

For Visconti, the fear was mainly caused by air pockets that the plane would encounter over the steep mountain peaks.

“When you were going over the Himalaya Mountains, and you hit one of those air pockets? Wow!” he said. “It was like a yo-yo, up and down.”

Visconti is among only nine World War II veterans that remain in the membership of more than 600 military veterans and immediate family members in the Edgewater AmVets post, said Bob Lariviere, post commander.

This week, Visconti met for lunch with two of the post’s other World War II vets, who also shared their memories. 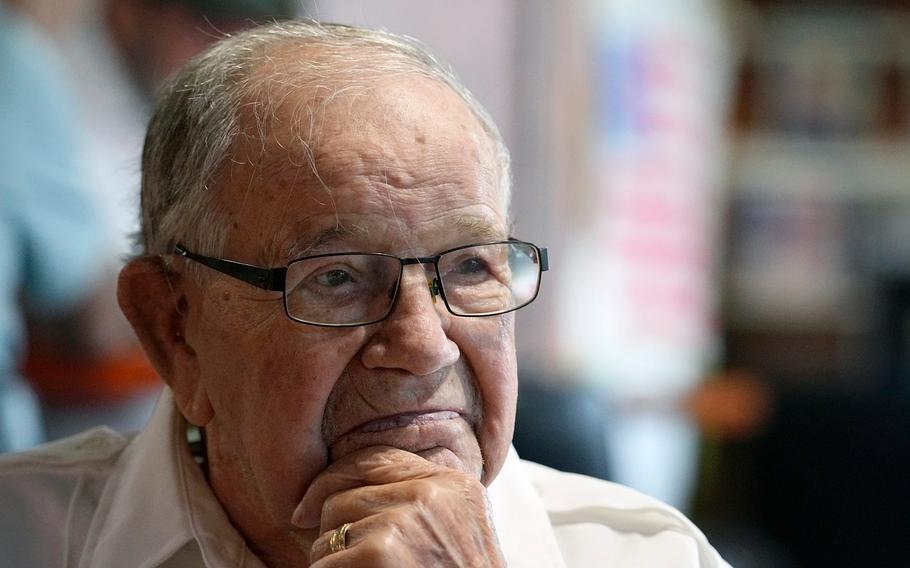 World War II veteran Ronald Wollet, 93, talks about his service a medic in the U.S. Army stationed in Osaka, Japan. That journey to Japan included a stop at Pearl Harbor, where wreckage of the attack was still smoldering. “It really made you sick," Wollet said. "But I remember that they came out and sang to us at Pearl Harbor on the way over.” (Nigel Cook, The Daytona Beach News-Journal/TNS) 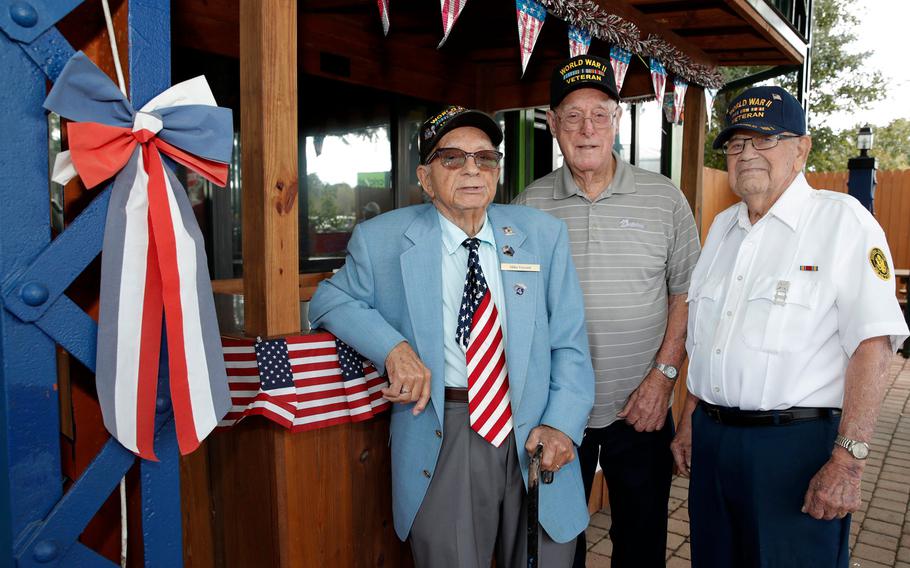 World War II veterans (left to right) Mike Visconti, Arthur Hobbs and Ronald Wollet talk about their war experiences and the impact of the Pearl Harbor attack this week at AmVets Post 2 in Edgewater, Fla. ()

Wollet had been working as an 18-year-old in an automobile parts factory in Hudson, Mich., when he was drafted into the Army. After stops in Chicago and Fort Polk, La., Wollet boarded a ship bound for Japan.

That journey included a stop at Pearl Harbor, where the wreckage of the attack was still smoldering.

“It was quite bad,” Wollet said. “It really made you sick. But I remember that they came out and sang to us at Pearl Harbor on the way over.”

When Hobbs enlisted in 1942 at age 17, he had never ventured far from the family’s farm in rural Bellaire, Ohio. He was quickly shipped out to Fort Leonard Wood in Missouri for basic training, with additional stops in San Francisco and Hampton, Va., before boarding a ship for Australia.

“I had finished high school on Friday and on Monday I was in the service,” he said. “I was anxious to get in because my brother was in the service and I wanted to be just like him. I had never been away from home until I went into the service.”

World War II vet: US is ‘worth fighting for’

As the number of World War II veterans declines, it’s even more important to honor and document their service and sacrifice at events such as Sunday’s Pearl Harbor Day ceremony, Lariviere said.

“It’s about acknowledging that these people are still alive, hearing the stories they tell about the things they went through,” Lariviere said. “They didn’t have the technology that we have now; it was just the grit and the grime.”

For Visconti, memories of Pearl Harbor are particularly personal.

“It became a family affair for us,” he said. “My first cousin, Arthur Visconti, was stationed at Pearl Harbor when it was bombed. He drove the ambulances picking up the dead and the wounded.” During the Pearl Harbor attack, a small boat rescues a seaman from the 31,800-ton USS West Virginia burning in the foreground. Smoke rolling out amidships shows where the most extensive damage occurred. Note the two men in the superstructure. The USS Tennessee is inboard. (WikiMedia Commons/TNS)

As a corporal in the U.S. Navy, Arthur Visconti also worked as part of the advance group for the Allied invasion of the Marshall Islands in the Central Pacific Ocean in January 1944, Mike Visconti said.

For Mike Visconti, there was no question about volunteering for military service.

“It was my honor,” he said. “I was an immigrant from Italy and when you came to this country, it was the best country in the world. It was worth fighting for.”

Pearl Harbor remains a seminal event in U.S. history, rivaled only by the 9/11 terrorist attacks on the World Trade Center towers and the Pentagon in terms of its impact on Americans, said Leonard Lempel, professor emeritus of history at Daytona State College.

Both events were catalysts that helped to unite, at least for a time, a somewhat divided nation, he said,

“Leading up to Pearl Harbor, there was a great deal of anti-war sentiment, a lot of isolationists and the America First movement,” Lempel said. “Most of that disappeared as a result of Pearl Harbor. It forced us into the war and the country was united in a common effort to defeat a real and present enemy with a goal of taking over the United States.”

At Sunday’s event, military veterans will be honored with songs, stories and emotional recollections by speakers that include Volusia County Sheriff Mike Chitwood.

“I’m honored to be surrounded by such incredible men and women who have served our country,” Chitwood said. “You can hear these stories about kids who were 16, 17 years old and went, with their parents’ permission, to sign up to defend our country. It’s just amazing people; amazing dedication and service to our country.”