Tandova “Tandy” Ecenia, 69, of Tampa holds her farther’s dance trophy Tuesday, Nov. 23, 2021 in Tampa. Tandy was recently contacted by a stranger who said they had a trophy that belonged to her father Martin Ecenia. The trophy was for winning a dancing contest held in October of 1941 in Pearl Harbor. (Chris Urso, Tampa Bay Times/TNS)

But one of Paul Ecenia’s favorite war stories had nothing to do with the war.

“He won the World Armed Forces Jitterbug Championship held in Pearl Harbor,” said daughter Tandova Ecenia, 69. “He was so proud. He mentioned it all the time.”

The competition was on Oct. 11, 1941, less than two months before the Japanese bombed the U.S. naval base in Hawaii.

Tandova Ecenia has seen a photograph of her father holding the trophy. But, until recently, she had not seen the physical trophy.

“Dad never mentioned it,” she said. “It was lost.”

Until it was found.

In mid-November, 80 years and one month after the victory, the 8-inch brass trophy was delivered to Tandova Ecenia.

“It was in a house that I was remodeling,” said Jim Duval, owner of J.D. Construction. “I found it behind some old cabinets we were removing. Clearly it had been lost for a long time. I thought I should find the owner.”

Having her father’s trophy “adds to his legend,” Tandova Ecenia said. “He was quite a character. He had so many stories.”

The story of that trophy, she said, represents a more innocent time of her father’s military experience, when sunburn and big waves, rather than Nazis and the Axis powers, were his biggest threats.

“He was a New Jersey guy in Hawaii,” she said. “He was partying.” 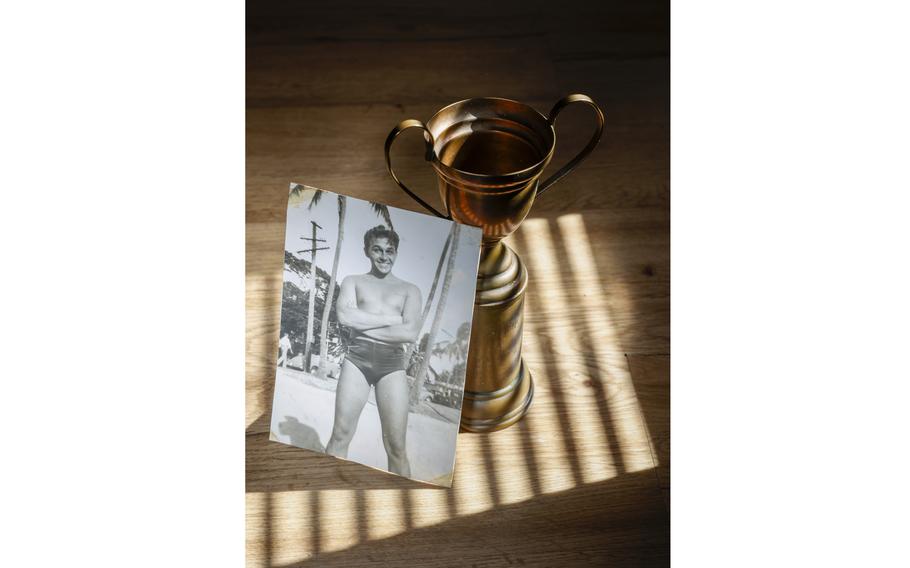 Martin Ecenia is seen in a photo from 1941 next to a dance competition trophy that he had won. (Chris Urso, Tampa Bay Times/TNS)

In 1941, Honolulu Star-Bulletin articles described Ecenia as an “agile-footed entertainer” stationed at Honolulu’s Fort Armstrong. He emceed military shows, starred in local community theater productions and had a .538 batting average for his Army baseball team.

“He was just so good at everything,” Tandova Ecenia said. “He was an extremely good dancer. Throughout his time in the service, he taught the jitterbug and entered dance competitions.”

The World Armed Forces Jitterbug Championship was held on a ship in Pearl Harbor, Tandova Ecenia said, but she doubts it was a global competition. “I don’t think people were flying in from all over the world to compete. It was probably for those stationed there.”

Her father’s partner was Lillian Martin, “a dancer at the Royal Hawaiian Hotel,” she said.

It was supposed to be one of his final weeks in Hawaii.

According to his daughter:

On the morning of Dec. 7, 1941, Ecenia was playing volleyball outside the Schofield Barracks, about a 20-minute drive from Pearl Harbor, when a bomb blew up “a portion of the barracks where they would have been.”

Ecenia recognized a Japanese insignia on the planes, so he “raced to Hickam Field,” a military base located less than 2 miles from Pearl Harbor.

But by the time he arrived, the “planes were in flames.”

The Japanese had bombed it to prevent air support.

“Bombs were flying, shrapnel was exploding everywhere around him. They flattened themselves up against a building to escape some of the flying debris.”

Rather than flying home as planned, Ecenia served in the war through 1945.

He met and married his wife, Ria, in Texas that same year. They relocated to Tampa in 1954, founded Allied Fence Co. and opened The Bowery, a Madeira Beach entertainment venue that featured full floor shows.

Tandova Ecenia would go on to become a professional dancer and then a prop master who worked on productions ranging from Hollywood films like Edward Scissorhands to local dance recitals.

His obituary says he was World Armed Forces Jitterbug Champion.

Duval found the trophy near the beginning of 2021 in a home in West Tampa but could not recall the address.

Tandova Ecenia said her parents never lived in that part of the city.

The homeowners were equally perplexed and allowed Duval to keep the trophy.

“The inscription is hard to see,” said Tandova Ecenia. “So it was sitting in his office, and then one day he was looking at it and the light hit it just right, and he could make out my dad’s name.”

Via Google, Duval found and called Tandova Ecenia’s brother, Gregory Ecenia of Sun City Center. He put Duval in touch with his sister.

“He delivered it to me,” Tandova Ecenia said. “We spoke for a long time. I told him all about my father. This is simply unbelievable. My dad would be so excited to know that his trophy is back.”