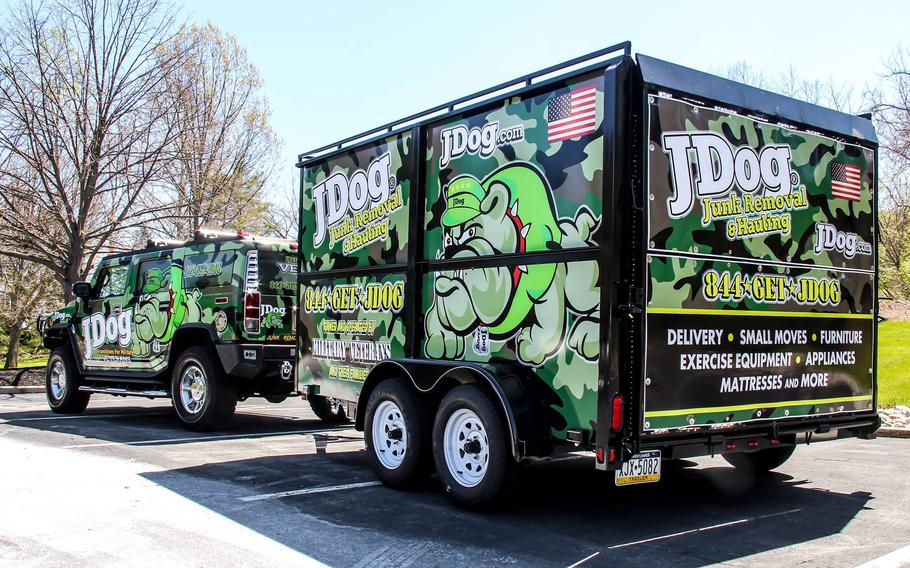 Joshua Coleman, owner of a Ridgefield, Wash., franchise of JDog Junk Removal & Hauling, started the business a few months ago and operates from his Ridgefield home. To expand his workforce, Coleman plans to partner with the Vancouver Veterans Affairs campus and its work therapy program to employ up to 10 fellow veterans. (Facebook)

Joshua Coleman, owner of a local franchise of JDog Junk Removal & Hauling, started the business a few months ago and operates from his Ridgefield home. He employs two, including his daughter and a fellow veteran who is leaving soon for full-time work in the Air Force.

To expand his workforce, Coleman plans to partner with the Vancouver Veterans Affairs campus and its work therapy program to employ up to 10 fellow veterans.

Having a business owned and operated by a military veteran means that there's extra support and understanding for the workers, Coleman said. It's a better environment compared with the last company that he operated, a local Amazon delivery service contractor.

"If a guy was struggling with PTSD, we couldn't really help," he said, referring to his former company. "We still had to deliver packages. Here, people understand what they've gone through. We understand the brotherhood and sisterhood of being in the service. If they're having a hard day, we can help pick up the slack."

Part of Coleman's and JDog's mission is to help reduce the rate of veteran homelessness to less than 1 percent.

Coleman said he is partnering with Lutheran Community Services in Vancouver to gather good quality furniture from homes and deliver it to refugees who are coming to the U.S. from war-torn areas, including Syria.

"If someone has furniture removal needs, we can hang on to that furniture, rather than junk it, and give it to families in need," he said.

Coleman's path to his latest job was unconventional. While serving in the Coast Guard, he mainly worked in search and rescue missions, he said. He left the service in 2014 and moved to Clark County, where he worked for several large corporations.

A few months ago, Coleman signed a franchise agreement with JDog Junk Removal & Hauling, founded by Tracy and Jerry Flanagan in Berwyn, Pa. JDog has spread to more than 200 locations in the U.S.

"It felt a little bit soulless working for big corporations. I was not really working toward a mission," he said. "I wanted to get back into something where I could connect with other vets and service members and work in helping those vets who are homeless, houseless or struggling."