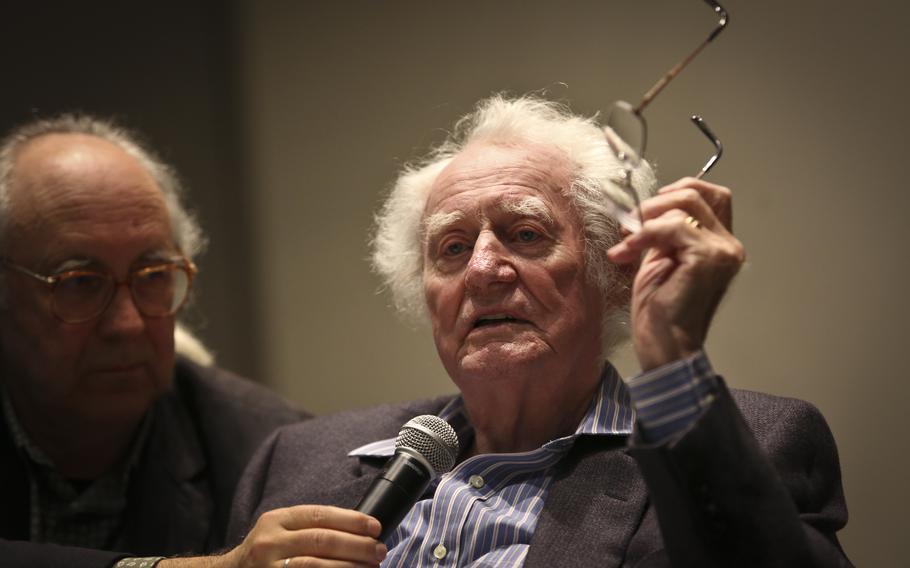 Poet Robert Bly reads from his book "Stealing Sugar from the Castle" at the University of Minnesota on Oct. 16, 2013, in Minneapolis. Holding his microphone is poet Thomas R. Smith. Bly died Sunday, Nov. 21, 2021. He was 94. (Renee Jones Schneider, Star Tribune/TNS)

MINNEAPOLIS (Tribune News Service) — Robert Bly, the National Book Award-winning poet who started out writing bucolic poems about rural Minnesota and went on to shake up the complacent world of 1950s poetry, rail against war, bring international poets to Western readers, and become a bestselling author teaching men how to be in touch with their feelings, died Sunday, just a month before his 95th birthday.

In his heyday, Bly was known for making theater of poetry readings — reading poems twice, or three times, just because he loved their sound; reading other writers’ work; wearing a rubber fright mask or an embroidered vest on stage; reading to the background music of drums and sitars.

But despite his theatrics, he was always intensely serious about poetry and its importance in the cultural and political landscape. He was besotted by words.

Bly lived most of his life in his native Minnesota, a familiar figure at local literary events until recent years, when his memory began to fade. His last public reading was April 13, 2015, at Plymouth Congregational Church in Minneapolis where he launched the collection, “Like the New Moon, I Will Live My Life.” One by one, 24 poets read their favorite Bly poems before Bly himself stood and read “Moon Behind a Cottonwood Tree,” “Arriving in the North Woods,” and the poem that had become his late-in-life anthem, “Keeping Our Small Boat Afloat,” about survival, grace, and death. He thumped his cane on the wooden floor of the church in time with the words.

After that, he occasionally attended readings, sometimes leaving before they were over, but he did not read in public again. His last book, “Robert Bly: Collected Poems,” was published in December 2018 by W.W. Norton.

In his essay “The Village Troublemaker,” the late poet Tony Hoagland described Bly this way: “Well over six feet, bulky of girth, with an unkempt rooster comb of thick dark hair, he stood on stage at the front of the auditorium, in a Peruvian serape.” Bly, Hoagland wrote, “has always been combative. … He has attacked whatever establishment has caught his attention,” from the U.S. government, to war, to consumerism, to old-fashioned views of patriarchy.

Bly was born on the family farm in Madison, Minn., on Dec. 23, 1926, one of two sons of Jacob and Alice Bly. After high school, he spent two years in the U.S. Navy, working with radar and sonar. He attended St. Olaf College for a year before transferring to Harvard, where he studied under Archibald MacLeish and was part of a group of feisty young writers — John Ashbery, Donald Hall, Harold Brodky, George Plimpton and Adrienne Rich. They were all irascible, Bly said in a 2000 interview in the Paris Review — himself included. “I puffed up my throat like an iguana.”

After college he spent four years writing in New York City with little success, even trying his hand at drama. “I wanted to be a playwright and wrote a play called ‘Martin Luther.’ The trouble was that no one in my family talked,” he told the Paris Review, and so his efforts at writing dialogue fell flat. “That effort was hopeless from the start.”

Bly attended the Iowa Writers Workshop, married Duluth short-story writer Carol McLean, and then received a Fulbright and went to Norway to study and translate Norwegian poetry. It was there that he became fascinated by the idea of publishing South American, Scandinavian and European poets, and he began working on translations of Pablo Neruda, Cesar Vallejo, Gunnar Ekelof and others.

Back in Minnesota, the Blys moved to a rustic farmhouse outside of Madison, a half-mile from where he grew up. His father had sold the family farm and bought three smaller farms. “One he kept for himself, one he gave to my brother, Jim, because he knew he was going to be a farmer, and one he gave to me because he knew I wasn’t going to be,” Bly told the Star Tribune in 2009.

The Blys lived rustically — the house had no running water until 1962 — and their four children, Mary, Bridget, Noah and Micah, were born there. In her memoir, “Paris in Love,” Mary Bly recalled one summer when her father was in charge of lunches. “He specialized in big, boiled tongues,” she wrote. “A hunk of tongue always seemed to be on the kitchen counter, labeled, ‘lunch.’ I would stare at it, repulsed, until I became so hungry that I would dowse a piece in salt and choke it down.”

With schoolteacher William Duffy, Robert and Carol Bly founded a literary magazine called “The Fifties,” in which they published avant garde poetry and poets in translation. The first issue of The Fifties, published in the summer of 1958, stated, “The editors of this magazine think that most of the poetry published in America today is too old-fashioned.” People paid attention. “When I read Robert Bly’s magazine, I wrote him a letter,” James Wright told the Paris Review in 1975. Wright, who won the Pulitzer Prize in 1972 and died in 1980, was teaching at the University of Minnesota at the time. His letter to Bly “was 16 pages long and single-spaced, and all Bly said in reply was ‘Come out to the farm,’” Wright said.

The farm became a gathering place for writers, including Wright, Bill Holm, Donald Hall, Lewis Hyde, Tomas Transtromer, Frederick Manfred and many others. After Duffy left the magazine, Wright and others helped out with the editing.

Bly’s first collection, “Silence in the Snowy Fields,” was published in 1962. “I spent whole days sitting out in the fields,” he told the Paris Review. “But there was peace. I had still had a great love of silence. ... I never would have written a book that interesting if I had not moved back to the country where I was a child.”

In 1966, Bly co-founded American Writers against the Vietnam War. In 1968, he won the National Book Award for his second collection, “The Light Around the Body,” which included poems harshly critical of the United States’ involvement in the Vietnam War. He donated the prize money to the antiwar movement.

His poem, “The Teeth Mother Naked at Last” is considered one of the most important poems to come out of the Vietnam War. It begins: “Massive engines lift beautifully from the deck./ Wings appear over the trees, wings with eight hundred rivets ... Helicopters flutter overhead. The death-/ bee is coming.”

Bly continued to write, translate, edit and publish for the next 40 years; in the 1970s, he published 11 books of poetry, essays, and translations. In 1975 he founded the Great Mother and New Father Conference, a gathering of poets, storytellers, and mythologists, which continues to meet annually.

He and Carol Bly divorced in 1979 (Carol Bly died in 2007) and in 1980 he married Ruth Counsell, a psychologist and Jungian analyst. They moved to their house in the Kenwood neighborhood of Minneapolis in 1993.

His 1990 book, “Iron John,” catapulted him to mainstream fame. The book was prompted by Bly’s intense grief at the death of his father, and it became an international bestseller, captivating thousands of men, drawing them to conferences to talk about their fathers and their emotions. In 1991 he was named one of People Magazine’s “most intriguing people.”

In a 1990 documentary “A Gathering of Men,” Bill Moyers and Bly explored the changing role of men in modern America. In 2009, the University of Minnesota Andersen Library sponsored a four-day symposium on Bly which included readings, workshops and a bus trip back to Madison, where Bly reunited with old friends and toured his old writing studio, which had been moved off the farm to the Lac Qui Parle County Museum, furniture and books intact.

At a ceremony at the museum, Bly’s niece, Julie Ludvigson, recalled seeing Bly on the farm back when he was young, steering the tractor with one hand, holding an open book in the other. “And then when he’d get over the hill, sometimes it’d be a long time before he’d come back,” she said.

In addition to the National Book Award, he has been honored with the 2013 Robert Frost Medal, the Transtromer Poetry Prize in Sweden, and Guggenheim, Rockefeller and National Endowment for the Arts fellowships. He served as Minnesota’s first poet laureate from 2008 to 2011 and won a McKnight Distinguished Artist Award in 2000. In 2015, at the annual conference, the Association of Writers and Writing Programs celebrated his work with discussions by Hoagland and others, topped off by a reading by Bly himself.

In 2012, his daughter Mary, a professor and author, talked to Minnesota Public Radio about Bly’s fading memory.

“My stepmother was talking about watching a video of him … and he said ‘I like that guy!’ And then he said ‘I wish I knew him.’ So it was very hard for my stepmother in that moment. But he’s both recognizing what’s happening — his sense of humor is not gone at all — and acknowledging that life has different phases.”