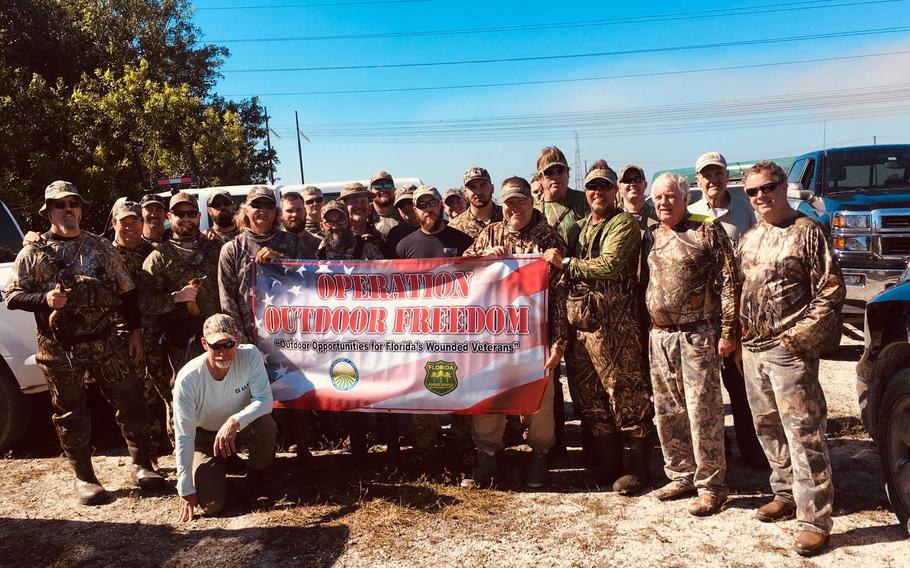 COLLEGE STATION, Texas (Tribune News Service) — In the last decade, there has been a surge in experimental therapy programs for United States veterans.

Emerging practices involve everything from psychedelic drug treatments and “Eye Movement Desensitization and Reprocessing” therapy to trial medications and neurological treatments like Stellate Ganglion Block (SGB), which involves an injection to the neck. But of all these emerging forms of therapy, one has proved to be both timeless and consistently effective.

Its common name is outdoor or wilderness therapy, but other variations include forest therapy, adventure therapy, and even forest bathing. While these might sound simplistic compared to more cutting-edge treatments, an emerging body of research is now proving forest therapy to be not only successful, but accessible and appealing to veterans, as well.

Anybody who’s been on a quiet morning walk through the woods can attest to the inherently calming nature of the outdoors. Trees, wooded lakes, mountain hikes, and forest streams all have a tendency to slow down our ever-racing minds and allow us to take a step into the present moment. And Jammie Schmunk, a certified forest therapy guide that operates out of the W.G. Jones State Forest in Conroe, Texas, believes this effect could be helpful for both veterans and civilians alike. She describes this practice as both mindfulness and “body-fulness.”

“What we’re doing in forest therapy is bringing all of our senses online,” said Schmunk. “When we awaken those, the mind slows down. We call it a slow walk through the forest because when we slow our body down, our mind will slow down as well.”

Schmunk, along with many others, believes that this phenomenon is a key component to helping veterans as they transition out of the military and as they learn to live with the changes to their mind, body, and identity.

While this kind of language might appear abstract, it’s actually grounded in a practice that began centuries ago and was formally recognized in 1982 Japan as “shinrin-yoku” — or forest bathing. It has since been quantified by scientific research, including a hallmark study that measured physiological components of people before walking in the woods, and again afterwards.

The study covered 24 different forests around Japan with twelve different subjects per forest, and a control group that walked through cities instead of woods. Cortisol levels (the stress hormone), blood pressure, pulse rate, and heart rate variability were measured before and after each session, and the results showed that “forest environments promote lower concentrations of cortisol, lower pulse rate, lower blood pressure, greater parasympathetic nerve activity, and lower sympathetic nerve activity than do city environments.”

These findings are particularly relevant to veterans, since a common symptom of Post-Traumatic Stress (PTS) is an elevated level of cortisol in the blood stream and an inflammation of the fight-or-flight response. The findings of “greater parasympathetic nerve activity” translate to an increase in the state of “rest-and-digest,” which is essentially the opposite of fight-or-flight and occurs only when the body is relaxed and calm. Meanwhile chronic stress, or prolonged exposure to cortisol, has been found to increase the risk of anxiety, depression, heart disease, weight gain, and memory/concentration impairment. Lowering those cortisol levels is an immediate way to alleviate many of those symptoms, and to combat PTS in veterans.

Subsequent studies have even found that walks in the woods trigger significant boosts in serotonin. Serotonin is the key hormone for stabilizing our mood and making us feel content and happy. It helps with sleeping, eating, and digestion, and it’s more permanent and longer lasting than dopamine. High levels of serotonin have generally been linked to feelings of overall well-being and happiness.

But beyond our own physiological response to forests, trees also clean the air and provide higher concentrations of oxygen for the brain, purifying the air that we breathe. Trees even release pheromones—which interact with their surroundings in ways we don’t entirely understand—and they put off a fragrance called phytoncide, which might even improve our immune systems.

The physical, mental, and social benefits of trees don’t stop there. A full list of studies and potential benefits for veterans and civilians alike can be found at the Healthy Trees, Healthy Lives website: https://healthytreeshealthylives.org/

While this growing body of empirical evidence continues to support the effectiveness of forest and outdoor therapy, many organizations are taking a more kinetic approach to treating veterans via the outdoors. One example of this is by combining outdoor therapy with adventure activities, such as hiking, hunting, or skiing.

Stacy Bare — an Iraq War Veteran, the former director of the Sierra Club, a National Geographic Adventurer of the Year, and the subject of a REIs short documentary Adventure Not War — conceived the idea of returning to areas of conflict where he served, but for the purpose of adventure instead of combat and war.

Ten years after finishing his tour in Iraq, Bare returned with a cadre of veterans to climb and ski the highest peak in Iraq, Mount Halgurd. The idea was to experience stress, adrenaline, and euphoria all in the same place he had prior, but this time in a healthy, exciting way, in order to help balance the memories and trauma of his deployment to Iraq.

“I can look back now on the symptoms and challenges of post-traumatic stress, adjustment disorder, depression, and a mild traumatic brain injury, manifesting primarily as drug and alcohol abuse,” said Bare at a TedX Talk in his hometown of Brookings, S.D. “So it’s no small statement to say that I was hooked, and later saved, by the outdoors.”

Another example of adventure therapy follows Taylor Grieger, a former rescue swimmer and Navy veteran, who underwent a similar experience: sailing around Cape Horn — the Mount Everest of Sailing — in order to overcome and raise awareness about PTSD. His journey was documented in the feature film Hell or High Seas, and he has since gone on to help establish American Odysseus Sailing Foundation, which takes veterans on sailing expeditions to provide a healthy outlet for their pent-up fight-or-flight response, and to blend that response with positive experiences like watching the sun rise over the ocean after a long storm.

Not every veteran is able or willing to climb the tallest mountain in Iraq — or navigate the “sailor’s graveyard” at the tip of South America — but other programs have emerged that serve as a moderate blend of adventure and outdoor therapy.

Operation Outdoor Freedom, heralded by the Florida Forest Service, is a prime example of a program that mixes time spent in forests and the outdoors with adventure activities such as hunting, archery, fishing, or even week-long cattle drives through the middle of the peninsula. Operation Outdoor Freedom is open to any Florida veteran with a service-connected disability rating of 30% or greater from the U.S. Department of Veteran Affairs.

Operation Outdoor Freedom was founded in 2009 as a means to utilize public lands for the benefit of wounded veterans. During their first year, the Florida Forest Service partnered with the Wounded Warrior Project, and ever since they have been providing opportunities for disabled veterans to return to nature and to pick up an activity like hunting or fishing that they either haven’t done since their injury, or that they had never tried before.

“It gives the veterans a certain sense of purpose, and it makes being outside more fun and exciting,” said Edgar Rodriguez, the Veterans Affairs Director for the Florida Agriculture Commissioner’s Office. “With the adventure aspect, I wouldn’t say it’s intense in any way. It’s actually pretty relaxing.”

Since its conception, Operation Outdoor Freedom has held over 700 events with 5,300 veterans served. The organization is also volunteer and donation driven, with most events taking place on state forests or public lands. The outcome has been overwhelmingly positive.

According to David Hunt, the state program coordinator of Operation Outdoor Freedom, the impetus for these events is the powerful bond that exists between foresters, wildland firefighters, and veterans. Veterans are often drawn to serve in state forestry agencies, and when the Florida Forest Service was donated a tract of land in 2007, they decided to use it in a way that gives back to the men and women who have served our country.

“Whether they are hunting, fishing, or sitting by the campfire, these experiences bring all generations of veterans together,” said Hunt. “Letting these veterans know that they can still enjoy the outdoors is an important part of learning how to live life after an injury.”

While the recreation aspect empowers these veterans and gives them confidence in themselves and their abilities, the most impactful part of each event comes at night, during “campfire time.” According to Hunt and Rodriguez, there is no methodology or prompt to kick-start campfire time. Participants simply gather in a circle around a campfire after the day’s activities and start talking.

“They definitely open up over the campfire times,” said Rodriguez. “And that’s one of the reasons they really want to come back. They bond and they see it as a really positive experience.”

While American Odysseus Sailing Foundation, Happy Grizzly Adventures, and Operation Outdoor Freedom are great examples of outdoor therapy, there is another option that is free and accessible to everybody: state forests. And according to forest therapy guide Jammie Schmunk, veterans can reap the benefits of forest immersion in the same way as everybody else.

“I have yet to see anybody go on a walk in the forest and then come out the same. It just doesn’t happen,” said Schmunk. “And that’s the point. There’s a place for every single one of us.”

“I think leveraging the forestry of Texas is an initiative worth pursuing,” said Davis, a retired colonel in the Marine Corps. “And I’m proud to share our state forests with any and all veterans looking for a restorative experience, or simply for a respite from their day-to-day lives.”

Programs such as Operation Outdoor Freedom are paving the way for the utilization of public lands as recreational retreats, and individuals like Stacy Bare and Taylor Grieger are helping revolutionize the field of veteran’s therapy. But there is a holistic beauty and simplicity to forest therapy that doesn’t have any social requirements and doesn’t require anything, really, other than a forest.

“As the guide, I just open the doors,” said Schmunk. “The forest truly, truly is the therapist. And I believe that if we could just take a 10-minute walk each day in nature, we’d live in a whole different world.”

Visit The Times Leader at www.timesleader.com