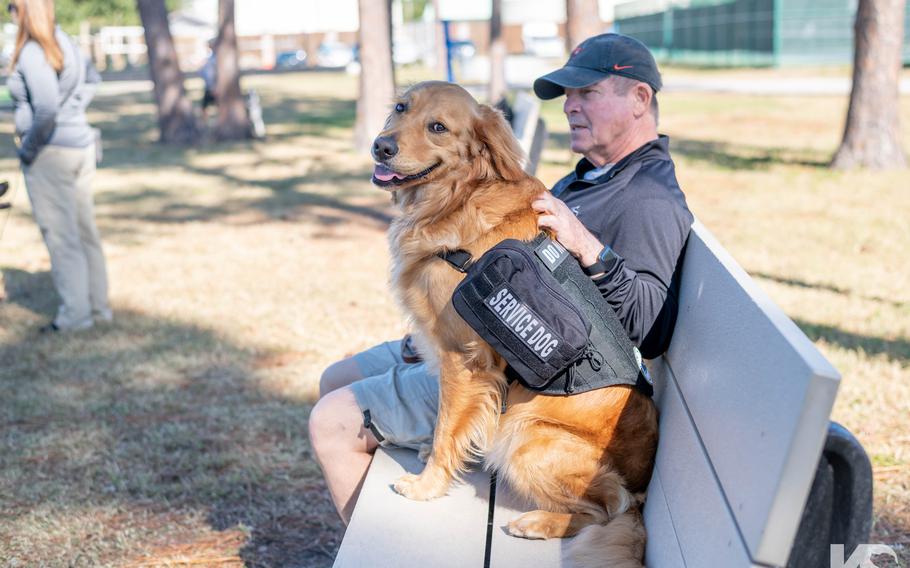 Wood joined Loose at a Thursday program that saw them and four other veterans graduate from the program.

“Coming to K9s for Warriors and receiving Loose has been the best experience of my life,” said Wood, who is from Oregon and was flown in for the three-week program at no cost to him.

Wood was involved in a 1968 firefight when his left leg was shattered, the organization said. He was awarded the Purple Heart and Combat Infantrymen’s Badge for his battle wounds, but his older brother Darrell was killed two years later, also in Vietnam.

Wood retired in 1995 after numerous tours, ranks and positions, but suffered from PTSD following his U.S. Army service. Saying he experienced “a lot of emptiness” over the last five years,” Wood said he turned to K9s for Warriors for ways to handle those traumatic symptoms,

“I was within the VA system seeking therapy and medication. I was looking for an alternative, and that alternative led me to exploring dogs first,” Wood said. “I then discovered the world of service dogs. I went online and found K9s for Warriors, and I immediately sensed it was genuine.”

His service dog is named after another Vietnam War veteran and Purple Heart recipient, John Loosen, who advocated for veterans and raised funds for K9s for Warriors until his early 2021 death.

Making a difference for those who served

The nonprofit works to match veterans with post-war trauma with dogs that can help mitigate their symptoms as well as restore their confidence and independence. K9s for Warriors headquarters is at 114 Camp K9 Road in Ponte Vedra Beach, with a Gold Family Campus in Alachua and a Petco Love K9 Center in San Antonio.

K9s for Warriors had been mainly helping veterans of more recent military operations in the Middle East, Iraq and Afghanistan. But when studies showed that suicide disproportionately affects older veterans who previously had not been eligible for K9s for Warriors’ services, the organization announced a change.

With the expansion of K9s for Warriors’ member population, the organization will now serve older veterans in its effort to prevent them from taking their own lives. K9s for Warriors now accepts service dog applications from any veteran experiencing service-connected symptoms.

As of this month, K9s for Warriors has rescued about 1,500 dogs. And during Thursday’s graduation ceremony, Stryker Corp. presented a $55,000 donation to the organization.