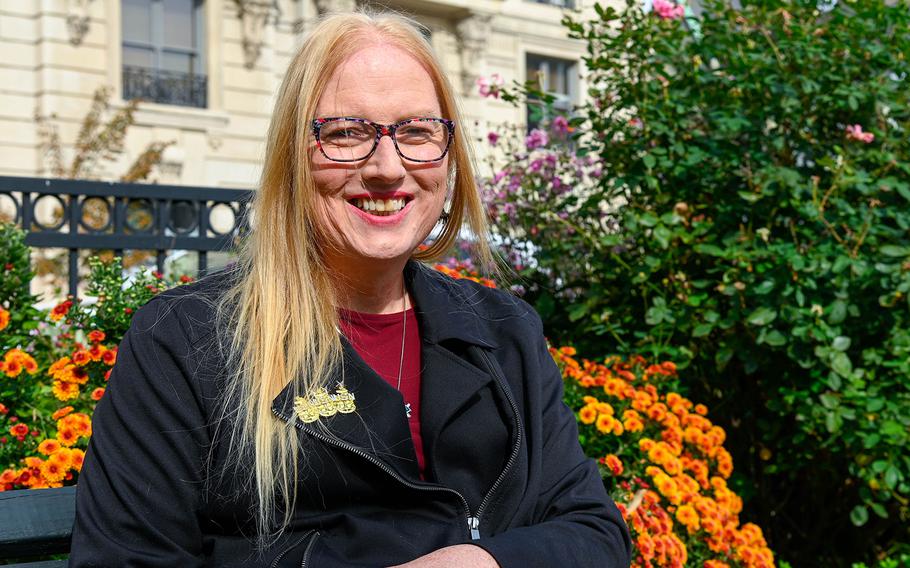 Taryn Wilson, of North Baltimore’s Mount Vernon, is waiting for the Department of Veterans Affairs to finalize its procedures for vets seeking gender confirmation surgery. (Ulysses Munoz, The Baltimore Sun/TNS)

(Tribune News Service) ⁠— Retired Navy mechanic Taryn Wilson of Baltimore says she experienced depression over the years because the sex she was assigned at birth did not match the one she sees herself as.

Wilson, 44, who retired in 2018 after 23 years of service, wants to have gender conformation surgery and was elated when the Department of Veterans Affairs announced June 19 that it will cover such procedures for former service members.

For Wilson, who is a transgender lesbian, not having the body she needs hurts her mental well being, she says, including intimacy with her wife.

“I really would like ... to make my body the way it’s supposed to be and make my life more comfortable,” she said.

However, the VA has yet to release details about when the surgeries will be offered and whether VA surgeons will perform them or if it will refer patients elsewhere. While no timeline has been established, the agency indicated it could take two years.

Wilson said that she needs the VA to cover her surgery because she can’t afford to pay out of pocket for it. Gender confirmation surgery, and accompanying procedures, such as facial feminization or hormones, can cost tens of thousands of dollars. Paula Neira, clinical program director for Johns Hopkins Center for Transgender Health who is a Navy veteran, said she paid $30,000 in 1995 for gender confirmation surgery.

The VA told The Baltimore Sun in an email this month that it was still assessing the number of veterans eligible for and interested in gender confirmation surgery.

“Since the announcement, the VA has initiated the rule-making process, including drafting the proposed rule and Regulatory Impact Analysis, which will be published as part of the rule making,” a spokesperson wrote. “VA is also putting together teams that will develop the framework to provide a full continuum of care consistent with VA’s rigorous standards for quality health care.”

When asked about a time frame, the VA noted rule-making generally takes two years. The Veterans Health Administration, part of the VA, will be the organization reaching out to veteran groups as the rule-making process proceeds.

The Modern Military Association of America, a nonprofit organization based in Washington that works with the LGBTQ military and veteran community, has been at the forefront of distributing information provided by the VA, said Jennifer Dane, executive director.

“We are keenly aware that there is no timeline established, and we are fearful that without implementation guidance, a new administration could derail care that is needed,” she said.

An estimated 1.4 million Americans, including slightly more than 22,000 people in Maryland, identify as transgender, according to the UCLA School of Law Williams Institute, a research center focused on sexual orientation.

Wilson, who enlisted in the Navy in 1995, saw service that included her ship’s participation in logistics operations in 2004 for oil platforms off Iraq for eight months during Operation Iraqi Freedom. She now lives in Mount Vernon in North Baltimore.

Wilson says she’s known she was different since middle school, but didn’t know how to express it.

She said she heard people use gay slurs during her time in the military. For example, she once heard sailors say if they learned there were gay people on their ship, they’d push them down the steep stairs.

“I heard things like that on a daily basis. I was deep in the closet,” she said.

She was terrified of losing friends and family after coming out in 2015, but says she felt supported.

“It was a very fulfilling feeling to be able to see myself for who I am and live my life authentically,” she said, adding coming out made her better at her job because she was less stressed than when she was in the closet.

Veteran Alice Ashton, 42, of Columbia described some of the feelings she’s had as a lesbian who was assigned the male gender at birth. Not having the right body, she said, makes sex difficult.

“It’s a source of almost depression. You don’t feel whole,” Ashton said. She, too, is concerned about when VA will finalize the details and a timeline.

“It’s not elective. It’s being able to feel whole and being able to live your authentic selves in a society that’s prejudicial and discriminatory,” Neira said. “Anything we’re able to help people live the healthiest life is something that we should be doing.”

Ashton served in the Air Force as a Korean linguist from 1997 to 2003 and in the Navy as an Arabic linguist from 2006 to 2020 and lives in the village of Oakland Mills. She says almost all the people at her rank were supportive when she came out, as opposed to those above her.

“It was difficult. Anytime there’s social change, I expect a pushback,” she said.

©2021 The Baltimore Sun. Visit at baltimoresun.com.