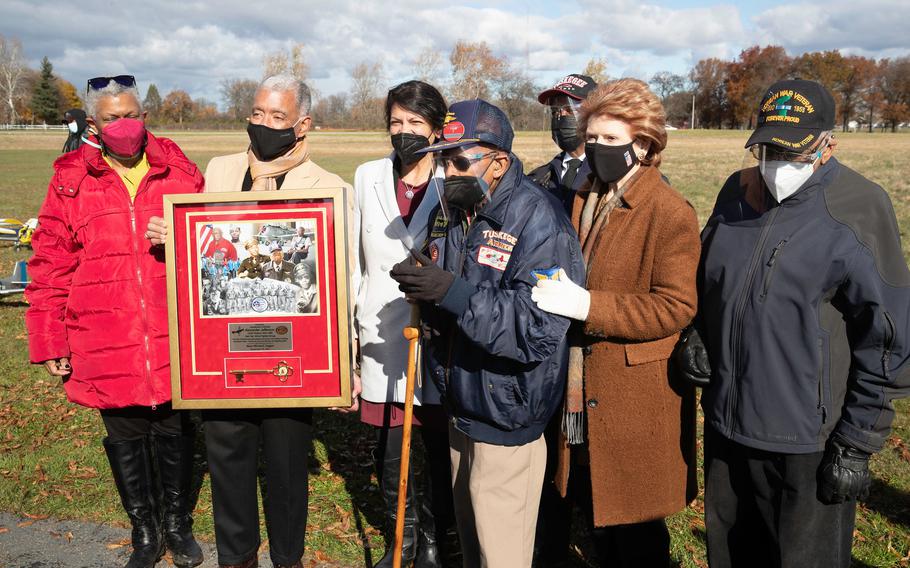 The city of Detroit gave Tuskegee Airman Lt. Col. Alexander Jefferson (center) a big present on his 100th birthday Monday, Nov. 15, 2021: a key to the city and a field rededicated in his honor. (City of Detroit Government/Facebook)

DETROIT (Tribune News Service) — The city of Detroit gave a Tuskegee Airman a big present on his 100th birthday: a key to the city and a field rededicated in his honor.

Lt. Col. Alexander Jefferson of the 332nd Fighter Group was honored Monday in the same field where, as a child, he used to fly toy airplanes. Jefferson Field at Rouge Park will have a plaza added and a bust of Jefferson. The field is currently used and maintained by the Detroit Aero Modelers to fly model airplanes.

As the deputy mayor presented Jefferson with a key to the city, he said, “This is an important moment, this is the essence of the city. We have proved leadership to this nation time and time again by African Americans.”

After his service in WWII, Jefferson was a science teacher in Detroit Public Schools and retired as an assistant principal.

“The city is so proud to honor one of our own, a hero who helped win World War II, then returned home to change lives by becoming a beloved teacher and assistant principal, all while ensuring that people continue to learn about the service of the Tuskegee Airmen,” said Rochelle Riley, director of the city’s Office of Arts, Culture and Entrepreneurship.

As an airman, Jefferson was shot down and spent nine months as a prisoner of war. Captured by German troops, he spent the first five months in Stalag Luft III, 80 miles east of Berlin.

Jefferson was born in Detroit on Nov. 15, 1921. He graduated from Chadsey High School and earned a bachelor of science degree from Clark College in Atlanta, Georgia: did graduate work in chemistry at Howard University in Washington, D.C., and earned a master’s degree in education at Wayne State University, Detroit.

In January 1944, he graduated from pilot training course at Tuskegee Army Airfield followed by three months of combat training at Selfridge Field, Michigan. He served as a P- 51 fighter pilot with the Red Tail, 332nd Fighter Group, 301st Fighter Squadron in Ramitelli, Italy.

In the course of providing protection from enemy aircraft, he flew 18 long range escort missions.

Jefferson also will be honored at an event Saturday that is being hosted by the Tuskegee Airmen Detroit Chapter and his family at the Coleman A. Young City Airport.