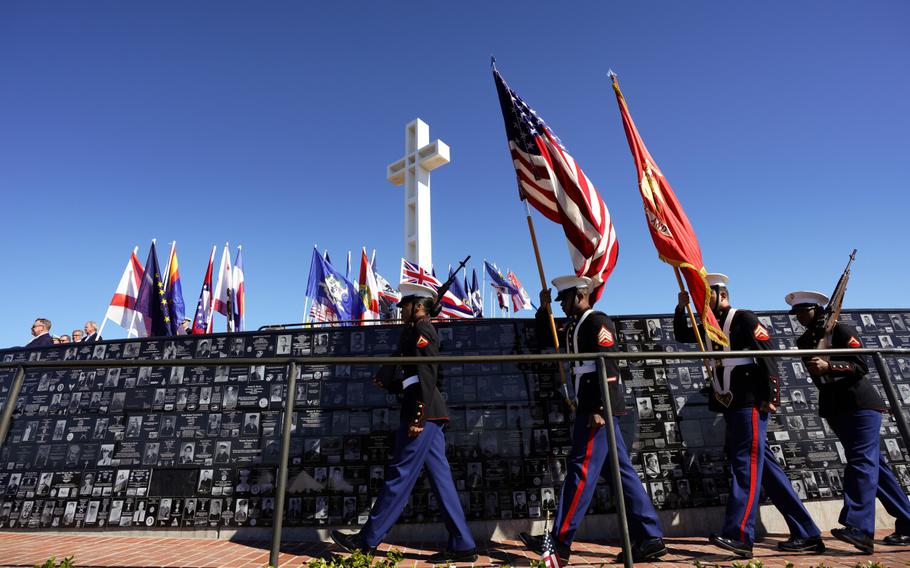 (Tribune News Service) — Just as she had done for him more than 50 years ago, U.S. Army veteran John Baca kept Angela Liakos in his sight and under his care on a warm Saturday afternoon atop Mount Soledad in La Jolla, California.

Wearing a Congressional Medal of Honor around his neck like a bolo tie, the 72-year-old Baca was seated next to the frail Liakos, a 93-year-old retired Navy captain and nurse, at a Veterans Day ceremony at the Mt. Soledad National Veterans Memorial.

The event honored all military veterans but also paid special honor to nurses such as Liakos who served in the Nurse Corps of the U.S. Army, Navy and Air Force.

During the hourlong event, Baca would sometimes take Liakos' hand and touch her arm. He removed his cap and placed it gently above her eyeglasses, on her head of curly silver hair, to shield her face from the sun. He smiled generously, being sure to make eye contact often, letting her know in unspoken terms that all was well.

"She's my guardian angel," said Baca, an Army specialist 4th class in Vietnam who was seriously injured in combat on Feb. 10, 1970.

That night, a grenade landed near him, and acting swiftly, Baca threw his steel helmet on top of it.

"Time kind of stopped, my life flashed before me," Baca said. "I saw my mother's face; I saw my sister."

The grenade exploded, and Baca recalled absorbing the fragments with his body, the shrapnel singeing his abdomen.

"My lieutenant, John Dotson, he lay beside me removing all the burning metal from my stomach and my legs," Baca said.

Baca saved eight soldiers from certain serious injury or death, and for his lifesaving action, he was presented the Medal of Honor in June 1971 by President Richard Nixon. Baca, who lives in Serra Mesa, has also been awarded the Silver Star, Bronze Star, Purple Heart and Air Medal.

It was when Baca was flown to San Diego to receive care that he first met Liakos at Balboa Naval Hospital, where she was running the nursing contingent. He said Liakos watched over him "like a second mother," visiting him every day to check on his healing during his road to recovery.

"The nurses were our guardian angels in Vietnam," Baca said. "I sat here a couple of years ago next to five Vietnam nurses, and they've seen more death and dying in their hospital beds than we did in the jungles. When we get together for reunions, they get overcome with emotions thinking about those they couldn't save."

The event — attended by a couple hundred people, including several uniformed Navy nurses and members of the Navy Nurse Corps Association of Southern California— featured a somber commemoration of the 100th anniversary of the Tomb of the Unknown Soldier and a flyover with nine planes. The flyover also included a "missing man formation" that paid tribute to Bob Phillips, a Navy veteran and a longtime trustee and event organizer with the Mt. Soledad National Veterans Memorial Association who passed away recently.

Retired U.S. Marine Corps Sgt. Maj. Neil O'Connell, president of the association, lauded the service members of the past and present, and shared time at the microphone with San Diego Mayor Todd Gloria and San Diego County Supervisor Jim Desmond, a Navy veteran.

Gloria said that San Diego County is the "proud home to more than 240,000 veterans," and said that the region is the No. 1 destination for veterans who have returned from post-9/11 conflicts such as those in Iraq and Afghanistan.

"Each year, 15,000 active-duty service members transition out of the military into our city," Gloria said. "And more than half of those patriots choose to stay right here in this community. I don't think that's a coincidence ... the service orientation (of San Diego) has drawn people to come to this community and stay in this community."

Gloria spoke in reverence of Stu Hedley, a Pearl Harbor survivor and president of the local Pearl Harbor Survivors Association who died at age 99 in August from COVID-19. Hedley never missed events that celebrated veterans.

"It is a huge loss to look out into this crowd and not see his white windbreaker, with all the patches, the puka shells, the lei, and his incredible style and smile, just happiness," the mayor said.

Rear Adm. Cynthia Kuehner, commander of Naval Medical Forces Support Command and a senior Navy nurse, flew in from Texas for the event. Kuehner served with the 1st Force Service Support Group in Fallujah, Iraq, where she provided direct casualty care in a busy medical facility during the height of combat operations.

She spoke to the crowd, explaining that the first nurses in the American military were appointed to the Army Nurse Corps in 1901, with the Navy Nurse Corps joining in 1908. The Air Force Nurse Cops wasn't established until 1949. But Kuehner made it clear that nurses have been helping the battle wounded since the late 1700s, and that they will continue to be a force well into the future.

At the close of the ceremony, Baca helped guide his former nurse from a wheelchair into a van driven by Liakos' caretaker. Baca said Liakos had been on a path to becoming an admiral, but he was grateful that she did not end up "behind a desk at the Pentagon."

"She's one of the angels that watched over us," Baca said. "I won't forget."