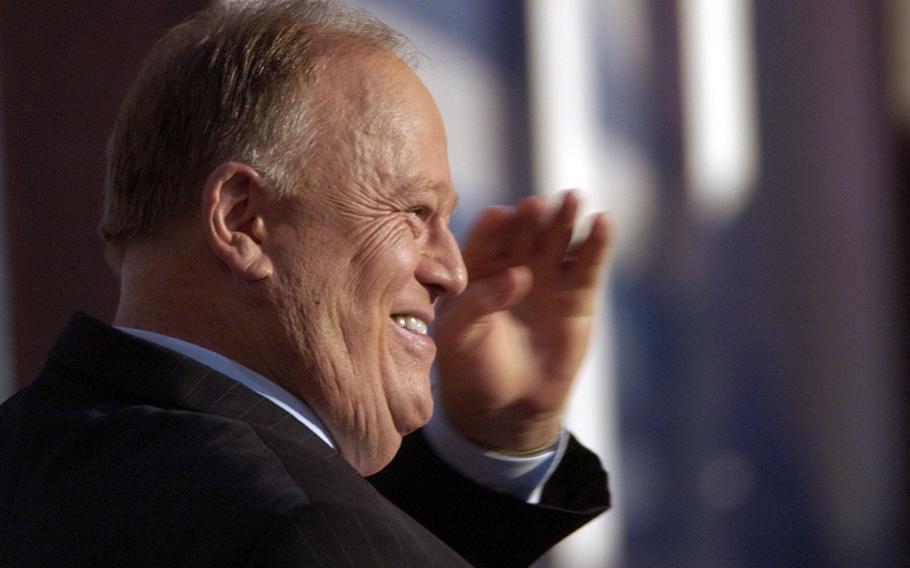 Max Cleland, an Army captain whose injuries during the Vietnam War left him a triple amputee and propelled his career in public service, including leadership of the Veterans Administration and one term in the U.S. Senate, died Nov. 9 at his home in Atlanta. He was 79.

The cause was congestive heart failure, said his personal assistant Linda Dean.

Cleland, a moderate Democrat from Georgia, was elected to the Senate in 1996 after heading the VA under President Jimmy Carter and serving as Georgia’s secretary of state. He was known primarily as an impassioned advocate for veterans and their families, launching counseling programs and championing services for post-traumatic stress disorder, which the VA began to recognize as a legitimate condition during his tenure.

He often spoke of his own struggles with depression and PTSD, which “came roaring back” after he lost his Senate reelection campaign in 2002 to Saxby Chambliss, a Republican congressman who had aired an attack ad questioning Cleland’s commitment to national security in the wake of the Sept. 11, 2001, terrorist attacks.

Describing his election loss to military author and journalist Thomas Ricks, Cleland said, “I went down - physically, mentally, emotionally - down into the deepest, darkest hole of my life. I had several moments when I just didn’t want to live.”

He began to recover after attending group therapy sessions at Walter Reed Army Medical Center in Washington, where he had been treated nearly 40 years earlier after losing his legs and right arm to a hand grenade in Vietnam. Were it not for the grenade wounds, he speculated, he probably would have been “a frustrated history professor somewhere” and never entered politics.

Cleland had volunteered for Vietnam believing he had an obligation to serve and fight in his generation’s war, much as his father had in joining the Navy after the Japanese attack on Pearl Harbor. He was awarded the Silver Star for his actions on April 4, 1968, when his battalion command post came under attack near the town of Khe Sanh. Cleland, a communications officer, exposed himself to a barrage of rocket fire while administering first aid to the wounded and helping move them to safety.

Four days later, he stepped off a helicopter and reached for a stray hand grenade, thinking he had dropped it and not realizing the pin had fallen out. He was knocked backward by an explosion he described in his 1980 memoir, “Strong at the Broken Places”:

“The blast jammed my eyeballs back into my skull, temporarily blinding me. ... When my eyes cleared I looked at my right hand. It was gone. ... Then I tried to stand but couldn’t. I looked down. My right leg and knee were gone. My left leg was a soggy mass of bloody flesh mixed with green fatigue cloth.”

For decades, he replayed the incident in his head, wondering whether he was to blame for his injuries. After learning of Cleland’s anguish from a History Channel documentary, a Marine who had witnessed the explosion got in touch with Cleland and explained that the grenade had belonged to a young enlisted man - “a walking time bomb,” as Cleland put it - who had lengthened the pins on his grenades in a misguided effort to make them easier to use in combat.

“I call it a freak accident of war,” Cleland said, “but that’s war.” 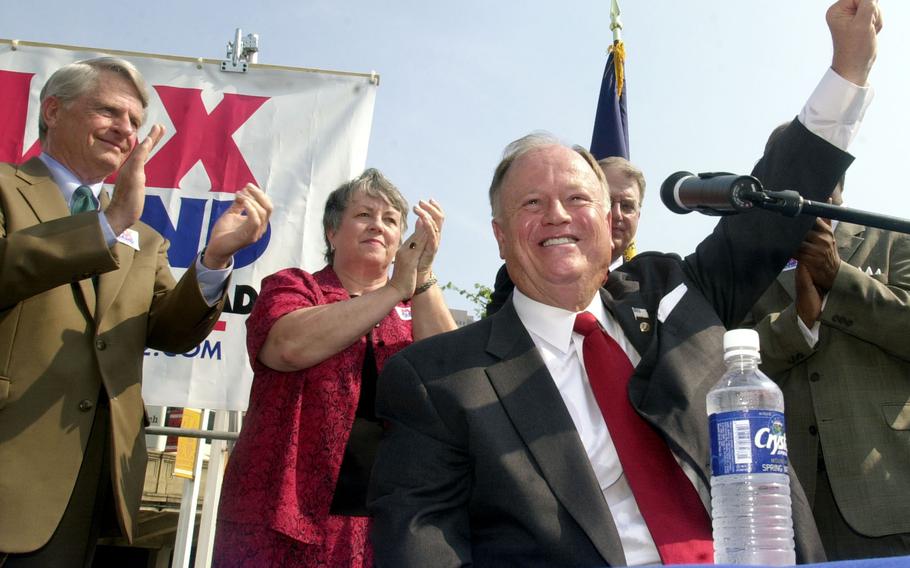 Evacuated by helicopter, he spent five hours in surgery and received more than 40 pints of blood before being sent to Walter Reed, where he underwent eight months of rehab. The former high school basketball star taught himself to walk with crutches and prosthetic legs.

In search of a new focus, anything to take his mind off his pain, he turned to politics as “a purpose and destiny” after returning home to Georgia. “I can remember sitting there in my mother and daddy’s living room and saying, ‘Well, no job. No future. No girlfriend. No car. No apartment. No money. This is a great time to run for the state Senate,’ “ he recalled in a 2002 interview for the Veterans History Project.

In 1970, he became the Georgia state senate’s youngest-ever member at age 28.

Cleland developed a friendship with Carter, the state’s newly inaugurated governor, who appointed him director of the VA in 1977. Over the next four years, Cleland sought to “renew a sense of purpose” at the agency, which is now the Cabinet-level Department of Veterans Affairs.

He returned to Georgia state politics after Carter lost his reelection campaign and seized the opportunity to run for the U.S. Senate after Sam Nunn, an emblem of the Democratic Party’s vanishing Southern conservative wing, announced his retirement in advance of the 1996 election.

Cleland defeated Republican businessman Guy Millner by 30,000 votes. He went on to vote with Democrats far more than his predecessor, crossing party lines to support a $1.2 trillion tax cut in 2001 but breaking with the George W. Bush administration on legislation creating the Department of Homeland Security. Like most other Democrats, he had objected to a proposal limiting employees’ collective-bargaining and union rights.

“As America faces terrorists and extremist dictators,” a narrator intoned, “Max Cleland runs television ads claiming he has the courage to lead. He says he supports President Bush at every opportunity, but that’s not the truth.”

The advertisement was denounced by members of both parties, including Republican senators and fellow Vietnam veterans John McCain and Chuck Hagel. “I’ve never seen anything like that ad,” McCain told The Washington Post in 2003. “Putting pictures of Saddam Hussein and Osama bin Laden next to a picture of a man who left three limbs on the battlefield - it’s worse than disgraceful, it’s reprehensible.”

The pictures were ultimately pulled from the advertisement. But if the ad aimed to pressure Cleland to align himself with the Bush administration, it was at least partly successful: In October 2002, he joined 76 other senators in supporting a resolution that authorized the use of military force against Iraq.

“It was obvious that if I voted against the resolution that I would be dead meat in the race, just handing them a victory,” he later said. Nonetheless, he lost to Chambliss by nearly 7 percentage points - dragged down, some analysts said, because he was running on the same ticket as Democratic Gov. Roy Barnes, who had angered White conservatives by fighting to remove the Confederate battle emblem from the state flag.

Cleland was devastated by the defeat, telling The Post, “It was the second big grenade in my life.”

Soon after leaving office, he also publicly disavowed his vote for the Iraq War, which he called “the worst vote I ever cast.” He said he had been hoodwinked by bad intelligence about “weapons of mass destruction” in the country and saw echoes of the Vietnam War in the conflict.

“To keep my sanity, I must not dwell on my part in those disastrous episodes in American history,” he wrote in a 2009 memoir, “Heart of a Patriot.” “I try not to blame myself too much. I work on my own recovery and renewal knowing that I can’t help anyone else unless I get, as Hemingway put it after his war, ‘strong at the broken places.’ “

“We can’t let where we’ve been dominate and control where we are headed,” he added, directly addressing other veterans recovering from their wounds. “Otherwise, we live an upside-down life.”

Joseph Maxwell Cleland was born in Atlanta on Aug. 24, 1942, and grew up in nearby Lithonia, Ga. His father sold car wax and automotive supplies from his trunk, and his mother was a secretary.

Cleland studied history at Stetson University in Florida, where he joined the ROTC and received a bachelor’s degree in 1964. He earned a master’s degree in history from Emory University in 1968, after having already deployed to Vietnam. His military decorations included the Bronze Star Medal.

While serving in the Georgia state Senate, Cleland ran unsuccessfully for lieutenant governor in 1974. He worked for the Senate Veterans’ Affairs Committee before being appointed to the VA.

He was never married and had no immediate survivors.

In the wake of his Senate defeat, Cleland investigated the terrorist attacks of Sept. 11, 2001, as a member of the 9/11 Commission. He accused the Bush administration of “Nixonian” efforts to stonewall document requests and resigned in 2003 to join the board of the Export-Import Bank. President Barack Obama later appointed him secretary of the American Battle Monuments Commission, which oversees military cemeteries and memorials abroad.

Cleland briefly returned to the national spotlight while hitting the 2004 presidential campaign trail with Sen. John Kerry, D-Mass., a fellow Vietnam War veteran. The bin Laden advertisement had made him “a martyr for Democrats across the country,” the Los Angeles Times reported, noting that Cleland was swarmed by veterans and well-wishers at campaign rallies in Iowa and New Hampshire.

It still took him more than 90 minutes to dress himself each morning, and using the wheelchair had grown more difficult. But politics - campaigning with Kerry and speaking with voters - had lifted his spirits, much as it had when he first ran for office three decades earlier.

“I guess I am a true soldier,” he told the Orlando Sentinel. “I just want to be out in the field. Don’t stick me in the headquarters. I can’t stand it. Just send me out there on a mission.”