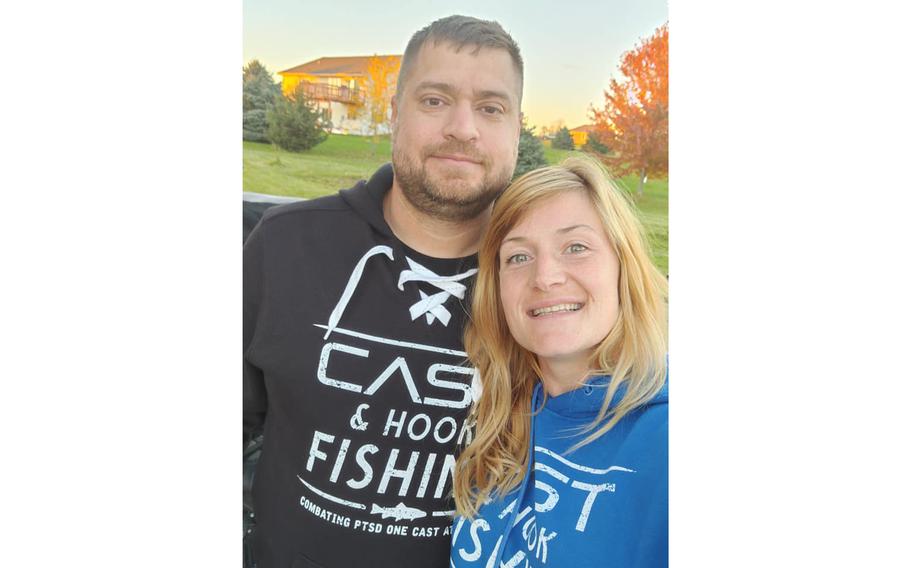 Veterans Lindsay and Richard Puente began an organization, Cast & Hook Fishing, to take first responders and veterans out fishing to help them deal with the trauma of what they’ve seen in their work. (Facebook)

ST. PAUL, Minn. (Tribune News Service) — Lindsay and Richard Puente were poised to start a food truck as a side business to their regular work — he is a St. Paul police officer and she is a licensed professional clinical counselor — when he had a dream that changed their path.

He woke up in June and told Lindsay, who is a veteran like him, that they should begin an organization to take first responders and veterans out fishing to help them deal with the trauma of what they've seen in their work.

"I could tell he had a strong conviction and I said, 'Let's do this,'" Lindsay said.

Cast & Hook Fishing was off the ground three days later. Their motto is "Combating PTSD one cast at a time."

Richard Puente and another officer happened to be the first to arrive at the Seventh Street Truck Park bar shooting last month that injured 15 people and killed a woman. It was a busy and difficult night, though it wasn't the most gut-wrenching of some of the death scenes he's responded to in his four years as an officer.

Most people in military service do not regularly see people who are deceased, "but I can't tell you one first responder who hasn't seen it, smelled it, experienced it," Puente said.

The Puentes are thankful for resources that are already in place for veterans to get help for post-traumatic stress disorder, but they think it's more difficult for first responders — especially at a time when law enforcement officers are feeling increased hostility since the Minneapolis police killing of George Floyd last year.

Peace on the water

Both Lindsay and Richard Puente, who have been married for eight years, grew up fishing. "As soon as I could cast a pole, I was probably out there," he said.

"Being out on the water is my getaway, it's therapeutic," Richard said. "I forget about everything when I'm out, so Lindsay and I both wanted to share that with others."

They spread the word about Cast & Hook on Facebook, and heard back from veterans and first responders offering to volunteer for their organization, and also people who said they could use some help and some time on the water. The Puentes started taking people out on their boat.

So far, Cast & Hook has taken more than 100 veterans and first responders and their families out fishing. Beyond law enforcement officers, they've worked with firefighters, EMTs, paramedics, 911 call-takers and dispatchers, and corrections officers.

They don't ask people questions about their job or PTSD, but Richard said most open up. "There's a lot of common ground without even having to say anything," Lindsay added.

Lindsay served in the Army National Guard for eight years, and Richard spent 12 years in the Army Reserve and deployed to Baghdad in 2009. They've both been affected by PTSD and Richard's brother, Michael Puente, died by suicide three months after Richard returned from Iraq.

Richard and Lindsay Puente said they would do anything to give people a lifeline of hope.

"You can get help and there's no shame in that," said Lindsay, who focuses as a counselor on working with women who are veterans and also with health care providers. "It takes a lot of courage and strength to say, 'I need help.' "

After the Seventh Street Truck Park bar shooting, Richard spent time fishing. It's often where he goes to decompress after a long week of work.

Many of the situations that first responders are called to are traumatic.

"These are situations that nobody is prepared to cope with because they're atypical situations," Lindsay said.

Departments offer employee assistance programs and peer support, which can be helpful, but the Puentes like the idea of fishing as therapeutic because the stakes are lower — people don't have to wait for an appointment and it's easier to say, "I'm struggling, I'm going out fishing."

"We want to break that stigma with law enforcement, first responders," Richard said. "We're expected to be mentally tough and the strong person, but it's kind of hard to protect people when you're struggling with stuff yourself. You have to take care of yourself, ultimately, to take care of others."

Volunteers and St. Paul businesses have been instrumental in helping Cast & Hook expand their cause.

"We had a boat that we would use every once in a while to go out with our family, but it just seemed like their need was much bigger than our need," Brian Ingram said. "And we thought, 'How great would it be if they could stay out longer and take more people fishing?'"

Cast & Hook provides equipment and fishing licenses if people can't afford or don't have them, and they also teach people how to fish. The location depends on where people want to go — some of the places they head to are the St. Croix River to catch walleye and Cedar Lake in western Wisconsin for crappies.

One retired colonel was interested in learning fly-fishing, so he could teach other veterans. Pat Mancini, co-owner of Mancini's Char House on West Seventh Street, has taken him out a couple of times — to the Kinnickinnic and Rush rivers in Wisconsin.

"These fighting men and women, they've been through a lot," Mancini said. "Being in the restaurant business, I do a lot of listening."

Meanwhile, Soapy Joe's Car Wash donated $1,000 for Cast & Hook to get kayaks, which participants can sign out to spend time on the water.

"It's been a very challenging couple of years for police officers," said Joe Lindsay, general manager and part owner of the West Seventh Street business. "I really admire and appreciate what Cast & Hook is doing for the health and well-being of the people who serve and protect us."

People can go through the Cast & Hook website at castandhookfishing.com to volunteer or donate to the organization, which is registered as a nonprofit in Wisconsin. First responders and veterans who are dealing with trauma and want to find out about fishing with Cast & Hook can also do so through the website.

The National Suicide Prevention Lifeline can be reached around the clock at 800-273-8255.