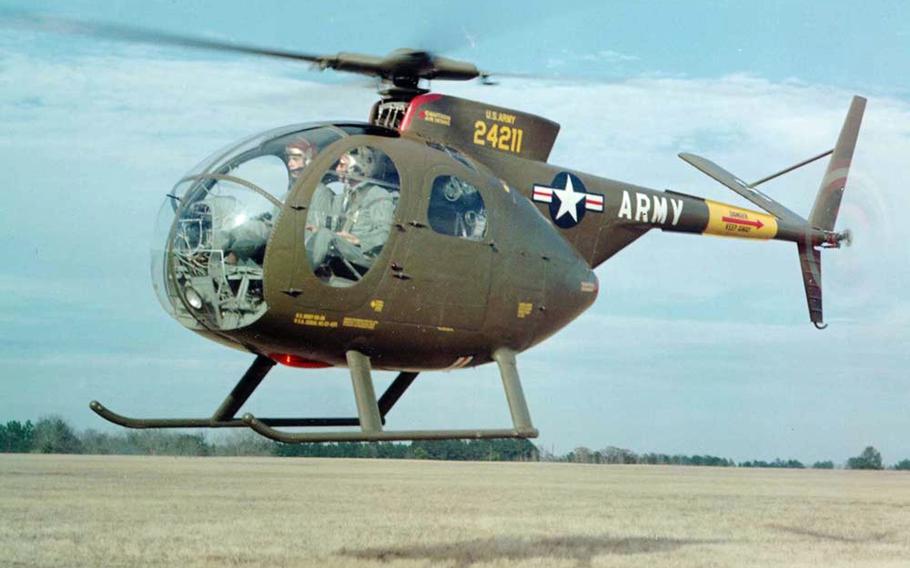 TOPEKA, Kan. (Tribune News Service) — When Larry Worthy returned from his stint in the Vietnam War as an aerial scout, he brought back a piece of the war with him — literally.

While attempting to scour the Vietnamese jungle for enemy soldiers, Worthy's helicopter came under fire. The first bullet deflected off his chest-plate and entered his jaw, becoming lodged in his head. He was able to land the helicopter — still fully conscious — and was rushed to receive treatment.

A few things helped him get medical aid. One was a fellow soldier who pulled a gun on an Army doctor so they would hurry up and help Worthy. And the other was the Hughes OH-6 Loach helicopter he was piloting — and the second Loach that took him to the first aid encampment — and he credits for saving his life.

"I don't ever regret it, not once," Worthy said. "I have a bullet in my head and I don't care. I don't regret one second of it."

When an OH-6 Loach came up for purchase, Worthy, a Rawlins County resident, knew he had to have it, no matter the cost.

"I want to share it with people because I think that what the scout pilots did, not a lot of people know about," Worthy said. "Most everyone knows about the Huey pilots that drop the troops off and pick up the wounded and they don't realize they're the scouts flying around over there getting shot at, trying to find the enemy."

Worthy, the OH-6 Loach and two other air scout helicopter pilots, all decorated, were in Topeka on Saturday night for an event at Forbes Field Airport designed to increase interest and understanding in the group of pilots that are less well known than many other Vietnam airmen.

Air scouts would skim the top of the jungle, looking out for the enemy using every means necessary. Sometimes outside equipment would be used, but mainly the helicopter teams used their own senses and training to identify Vietcong infantrymen for their American counterparts on the ground.

"The ability of an aerial scout is to see that which God didn't put there," said Hugh Mills, a fellow pilot.

Mills was awarded four Silver Stars, three Purple Hearts and the Legion of Merit for his service. He co-wrote a memoir about serving as an aerial scout and flew more than 2,000 hours in the OH-6 in Vietnam.

He later piloted similar helicopters for the Kansas City, Mo., Police Department but said flying the OH-6 always took him back to Vietnam — it was the first aircraft he was trained on in the military.

The tactic of using a group of pilots solely dedicating to scouting the enemy is something that wasn't used prior to Vietnam and hasn't been used in the same way since, Worthy said.

"At night, we'd come in and report what we found to the intelligence guys," Worthy said. "They'd go: 'You're finding so much intelligence. Way more than anybody else on the ground. Somebody needs to write a book about you guys.'"

Mills and a third pilot, Bruce Huffman, flew in Worthy's OH-6 earlier in the afternoon, with the helicopter on display alongside other Vietnam War-era aircraft at the American Flight Museum at the airport.

Huffman said serving in the war was a seminal moment in his life, serving as chairman of the Distinguished Flying Cross Society, an award he, as well as Worthy and Mills, won for their service in the war. The memories were so strong, Huffman said he felt called to fly in from Arizona to participate in the event.

"What I acquired by the age of 21 has served me well throughout my life," Huffman said. "Because I feel today that there isn't a challenge that I couldn't take or anything that I would be intimidated by. Because I was successful."

All three men underscored the need to improve understanding, particularly among younger generations, about the Vietnam War and how and why it came to pass. For Robert Rice, director of the American Flight Museum, there is no better way to do that than bringing their stories — and their aircraft — to Topeka.

"You can read a book about something or maybe watch a movie or documentary," Rice said. "But when you can sit down and listen to these guys talk and see the helicopter fly around, it is that three dimensions you can't get out of a book or movie."