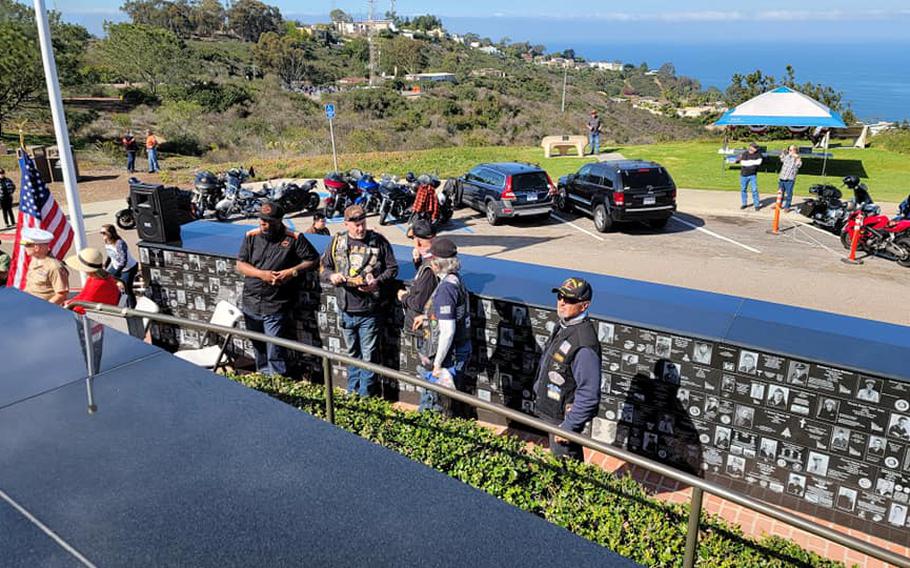 (Tribune News Service) — Harley riders and veterans hit the 5 freeway early on Sunday, riding their motorcycles across Southern California to raise awareness and funding to help injured and ill military veterans with services as they transition to civilian life.

The 10th annual Injured Warrior Appreciation Run started at the Harley-Davidson store in Irvine and ended at the Mt. Soledad National Veterans Memorial in La Jolla. A special ceremony was held there, including participation from the U.S. Marine Corps Color Guard and Marine Band San Diego and a flyover. The Orange Coast Harley Owners Group put it on.

The event, which in a decade has raised about $650,000, benefits Warrior Foundation Freedom Station, a nonprofit organization that provides support services and transitional housing to ill and injured service members. Chris Mosher, a Marine Corps veteran who served in the Presidential Honor Guard and is director of the HOG chapter, said the organization has been tremendously supportive of the veterans over the years.

Organizers said the most impactful benefit is the transitional housing program in San Diego. Freedom Station opened in 2011 in the Golden Hill area and Freedom Station II opened in May 2020 in San Diego’s South Park area. Most of the veterans who live in the nonprofit’s housing have recently separated from the services and come from the Naval Medical Center in San Diego, just about a five-minute drive away.

“These warriors continue to recover at Freedom Station while pursuing self-sufficient lives and preparing for their futures in our communities,” said retired Marine Corps Col. Greg Martin, who is president of the Warrior Foundation Freedom Station. “Usually, this entails going to a local university, trade school, or diving right into a new career. They enjoy the support of our staff and the camaraderie of other warriors.”

For the Harley owners, the event is a nice ride with a purpose.

“Each year, Orange Coast chapter members head out on our bikes and hit the roads across this great nation of ours,” Mosher said. “We ride lots of miles, but none of them are more important than the 72 miles we ride each October to support this great cause.”