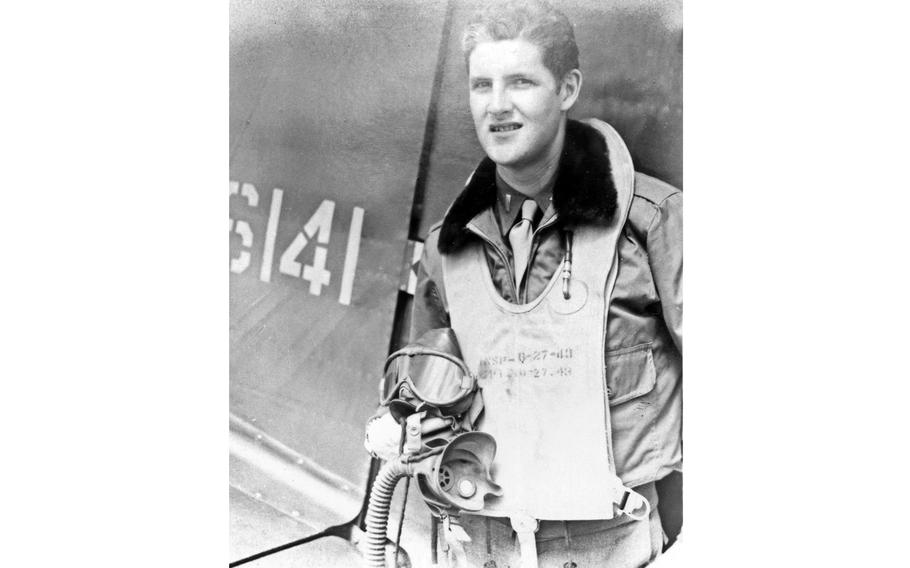 Former U.S. Army pilot Harold C. Brown was given a rag doll by a woman in London in 1944, for good luck. Brown carried the doll on 63 flight missions. (Submitted photo)

JANESVILLE, Wis. (Tribune News Service) — Harold C. Brown was a pilot, 19 years old and on leave from the U.S. Army in the spring of 1944. He found himself in London in military uniform, agape and staring up at the gray sky as a squadron of German bombers soared overhead on an air raid.

As people in the city scrambled for cover, a London woman who Brown didn’t know collared Brown and convinced the American soldier he would need to evacuate with her to a bomb shelter.

What the woman did next was as unusual as it was uncommonly kind — and it stuck with Brown the rest of his life. She handed Brown a small child’s rag doll with dark eyes, rosy cheeks, a bonnet and a floral-print and polka-dotted body.

On the doll, the woman inscribed in ink a simple sentiment: “Happy Landings.”

The message was tailored specifically for Brown, who at the time of his encounter with the London woman was an Army pilot who was yet to fly his first combat mission. He soon would.

The London woman’s gift of the rag doll to Harold Brown is one of dozens of curios collected over the last two decades by the Wisconsin Veterans Museum as part of “Souvenirs of Service,” a new exhibit of wartime souvenirs — and the stories behind them—that the Madison museum plans to unveil Nov. 5.

Brown died in 2013 at age 89. He had donated the rag doll to the veteran’s museum along with flight logs and other photos, in the early 2000s.

Museum curator Kevin Hampton said Brown’s story is one of the more fascinating—and detailed—examples of war souvenirs that he has ever come across. Because of that, Hampton expects the item, along with related records and a recording of Brown telling the story of the doll, will likely remain on display for most of the exhibit’s run.

“I always tell everybody that the Wisconsin Veterans Museum is the microphone,” Hampton said. “So we’re very fortunate. We have not only an object from Harold Brown, but we also have archival components and we have his picture. So we know what he looked like and a few other things, as well as an oral history ... the whole story told to us (by Brown) in his own voice.”

One of Brown’s first missions was on his 20th birthday — a strafing and dive-bombing run over Normandy, France. The date was June 6, 1944: D-Day. Then, there were 66 other missions he flew in a P-47 — a hybrid fighter/bomber plane model used in aggressive bombing runs. 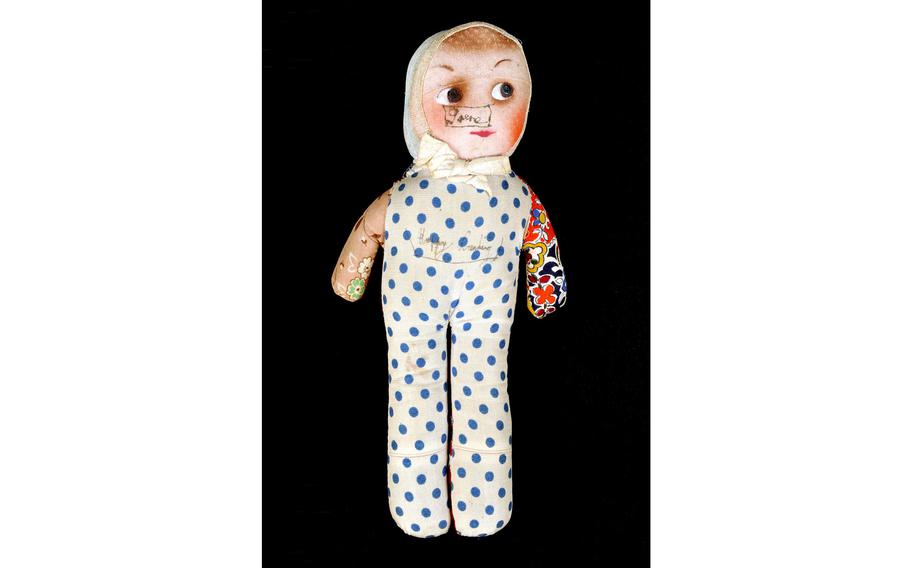 Former U.S. Army pilot Harold C. Brown was given a rag doll inscribed with the words “Happy Landings” by a woman in London in 1944. (Submitted photo)

Brown survived all those runs, although not every landing was a happy one. Three planes he flew crashed in combat, Hampton indicated.

Most U.S. combat pilots at the time estimated they would survive an average of about 12 missions before being shot down. Brown, in his own journal entries at the time, said he was one of just three pilots in his squadron who survived the European tour at the height of World War II.

A glimpse at Brown’s archived flight log—written in a scrawled cursive that’s at times difficult to decipher—shows Brown laying out in the plain, matter-of-fact language gripping accounts of battles and other pilots he knew who didn’t survive their missions.

In one such entry, Brown recounts a conversation he had over the radio with another pilot in his squadron who had been shot down over Lake Steinhude in southern Germany. He identified the lost airman only by his last name: McDonald.

“Tried to get altitude, but was too weak,” Brown wrote. “Last seen attempting to belly in. Last words: Tell my wife not to worry, I’ll be alright. He sure had guts.”

A few other times, Brown had to manage aerobatics at such high altitudes that his plane’s engine cut out for minutes at a time, making it easier for enemy aircraft to zero in on him. He narrowly escaped the fate of some of his friends more than once, he wrote.

In other records, Brown admitted he was a scared young man — afraid like many other young soldiers at the time that he wasn’t going to survive the war.

That gives the story of the 1944 London woman and her unique good-luck gift to Brown such gravity, Hampton said.

“If you’d have come across it in the attic, without even knowing anything about it, if he (Brown) had never passed along the story, you’d never know what this doll is about. It doesn’t make sense because it’s obviously not military. It’s a rag doll,” Hampton said. “But it’s only because we had the interview with him (that) we know the deep, deep meaning behind it.”

Hampton said that during the war, Brown treated the English woman’s rag doll like it was an ancient amulet of protection. In later years, he told friends and family he believed it had brought him good luck. He protected it his whole life, storing it for years in the sock drawer of a dresser.

When Brown’s rag doll goes on public display Nov. 5, along with the story told in his own words — alongside dozens of other Wisconsin soldiers’ wartime souvenirs — Hampton said people will recognize it right away.

Just as Brown did, the museum decided to display his rag doll in the drawer of a wooden dresser, nestled neatly among folded socks. It’s the way so many memories are kept.

“I always tell everyone, it’s the humanity behind the history that makes the difference. The humanity is the history,” Hampton said.

Visit The Janesville Gazette at www.gazetteextra.com