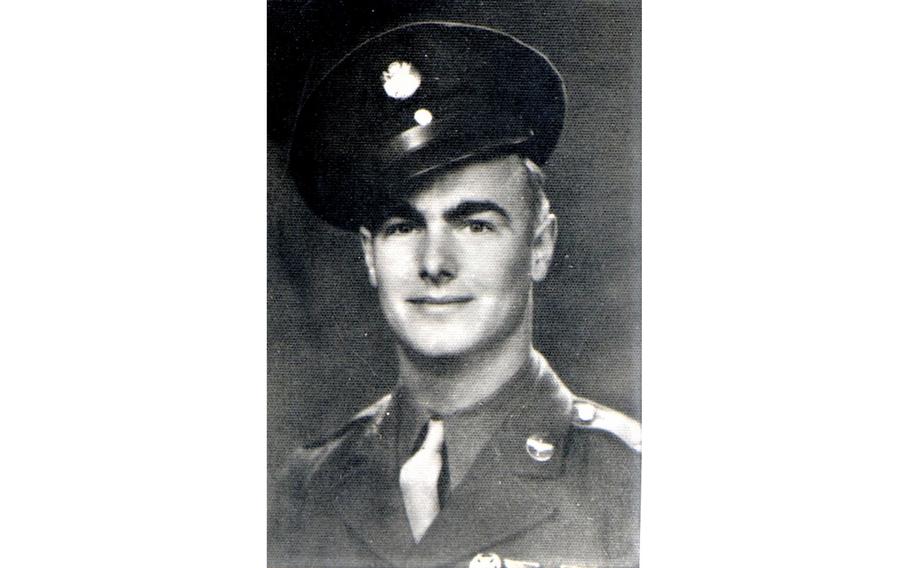 Sgt. Francis Wiemerslage was killed in a midair explosion aboard an aircraft on a bombing run in Germany in March 1945. His remains were located and flown to Chicago for burial in River Grove, Ill. (Defense POW/MIA Accounting Agency)

CHICAGO (Tribune News Service) — When a B-17 bomber exploded over Germany 76 years ago killing 20-year-old Sgt. Francis Wiemerslage, it left a hole in his River Grove, Ill., family that never healed.

With his body unaccounted for, Wiemerslage’s grieving mother, Vivian, for several years after his disappearance set a place for him at the Thanksgiving dinner table in case her beloved son miraculously came home.

His kid brother Roland, just 9 when Wiemerslage died in battle, spent much of his life trying to fill the void of his missing brother. Before his death in 2019, Roland Wiemerslage provided a DNA sample for unidentified remains discovered in German fields that same year.

On Saturday, several Wiemerslage relatives plan to fulfill the wish of other departed family members and say goodbye to a son of River Grove cut down in his prime during the war. A military funeral will be held for Sgt. Wiemerslage at St. Cyprian Catholic Church in his hometown, where his family were early settlers and deeply involved in the community.

An urn with Wiemerslage’s remains will be buried in a family plot at St. Joseph Catholic Cemetery, along with his mother and brother, who mourned his death for years. “It’s kind of like a homecoming,” Phil Wiemerslage said of his Uncle Frankie, whom he never met.

“One of the last times I spoke with him, (Roland) said ‘Phil never forget about Frankie,’ ” Phil Wiemerslage recalled. “I think he knew he wasn’t going to make it, and he wanted to see us carry it through.”

Frankie Wiemerslage’s legacy loomed large for surviving relatives, who grew up with stories of the high-spirited young man. “None of us ever met him, but it’s just part of family history ... but more so than family, it feels like history,” Phil Wiemerslage, 62, said.

Barely 5-foot-3 and 125 pounds, Frankie Wiemerslage sported a big personality and toughness that belied his size, his family said. “My grandmother described him as being ‘full of piss and vinegar,’ said Phil Wiemerslage. “He was a tough little German-Irish kid.”

Born in 1924, Frankie Wiemerslage, along with his brothers, Roland and Harold, and sister Audrey grew up in River Grove when it was populated by the families of early German settlers, who had flocked to the area. The family had long ties to the community, and their grandfather, Frank, was a longtime police chief known to ride his bicycle around the village until a motorcycle and sidecar were purchased.

Despite a mischievous persona and a general disregard for academics, at age 16 he tried enlisting in the Army following the 1941 attack on Pearl Harbor.

Delayed from service because of a heart murmur, he entered the service at 18 and later joined the 385th Bomber Group, Heavy, 549th Bomb Squadron in the Army Air Corps. His size made him ideal as a ball turret operator in the heart of the massive bombing vessel.

On March 2, 1945, Wiemerslage and eight soldiers from his crew were on a bombing run in Dresden aboard their B-17G Flying Fortress when the bomber was disabled by enemy aircraft, according to the U.S. Army.

Two soldiers managed to safely parachute, but Wiemerslage and six crew members died when the plane exploded in midair.

Following the explosion, Wiemerslage was reported missing and later declared dead. In the postwar years, all of the bodies on the plane were located, except for Wiemerslage’s. At home, his mother had difficulty coping with his death. For several years, his family ran death notices expressing their anguish.

“She never wanted to admit that he was dead. ‘Maybe he’s just living in the forest,’ or maybe he’s living with another family and forgot who he was,’” Phil Wiemerslage said of his grandmother.

In November 1953, searchers working for the American Graves Registration Command found several bones and a wallet with “F.W.” in a field in Zuhlsdorf, according to the U.S. Army. The remains were buried the next year and remained so until they were unearthed in 2019 and later matched after a DNA comparison with Roland Wiemerslage.

Phil Wiemerslage was present earlier this month at Midway Airport with his wife, two sisters and cousin when the arrival of his uncle’s remains received a hero’s welcome, followed by a long procession of American Legionnaires and bikers.

Phil Wiemerslage said he felt the added weight and loss as the funeral drew near. “I feel (the family legacy) immensely,” he said. “It’s almost bigger than him and my family ... it’s almost like a symbol. It’s just a reminder of what generations before us sacrificed to give us a lot of good things that we enjoy today.”