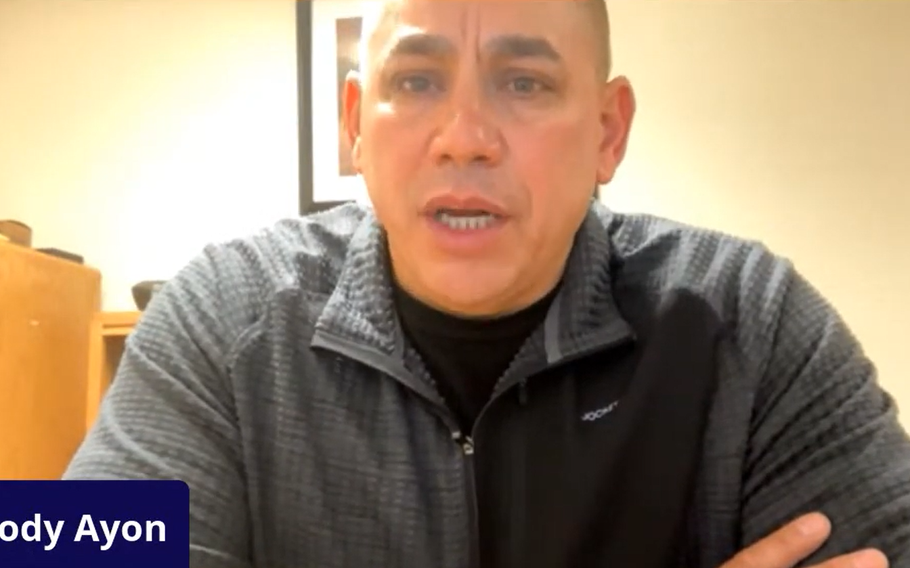 Iraq War veteran Bill “Cody” Ayon served in the United States Navy and later with the New Mexico Army National Guard, and is a recipient of the Bronze Star. His story will be featured in a PBS documentary, “American Veteran,” that will air nationally Oct. 26, 2021. (Screenshot from YouTube)

DEMING, N.M. (Tribune News Service) — Iraq War veteran Bill “Cody” Ayon has served the community of Deming, his country, and his heritage, and is sharing that service, his culture, and life in a PBS documentary that will air nationally on Oct. 26, 2021.

A 1992 graduate of Deming High School, Ayon looks back on his life in Deming as a child and young adult. His family circle was front-and-center — built on strong ties — and the indigenous culture he was raised in.

He was a top athlete while at DHS and later took an oath to protect and served as a Deming Police Officer.

Ayon went on to serve his country in the United States Navy and later with the New Mexico Army National Guard, during which time he was deployed for combat duty during Operation Iraqi Freedom in Iraq.

His military service spanned from 1992 through his retirement from the Army in 2016. He is the recipient of the Bronze Star.

He proudly carried his Native American culture to foreign lands and within his beloved country. "I have had the unique and blessed opportunity to be featured in an upcoming PBS documentary," Ayon told the Headlight.

"Being Native American and being allowed to be a part of this extraordinary documentary, and to have had the honor of serving our country in a military capacity, has led me to be humbled beyond words. Understanding the lineage I come from, and my family roots both based in Deming, NM and from Oklahoma have allowed me to understand that my service meant so much more to me, in that I had the opportunity to defend and serve the great land that my ancestors and family fought and died for and still call home to this day."

The documentary is titled "American Veteran," a four-part series that traces the veteran experience across our national history and exploring the present-day prevalent divide between civilian and veteran communities.

In 2018, as a Western New Mexico University alum, Capt. Bill "Cody" Ayon donated to the Smithsonian Institute a drum he played during a Native American Appreciation celebration at Al Faw Palace in Iraq and for events held by WNMU Native American Club on campus.

"That drum was the one I took to combat then brought home and used at school while I finished my degree," he said in a 2018 WNMU interview. "Now, it belongs to the Smithsonian's National Museum of the American Indian."

Ayon was born in Deming and raised in Silver City. His mom, the late Gloria Jarvis, is Mexican and his dad, Pete Ayon, is Cheyenne. "People who know me in Deming know me as Jarvis," Ayon said.

The family drum he enjoyed while deployed and in school is a large pow wow drum that he learned to play as a child when his parents taught him the language and customs of his ancestral relatives.

Capt. Ayon joined a Shiprock-based pow wow drumming group called Talking Spirit, and his passion for singing and playing grew during his deployment and his time in the Native American Club at WNMU.

While doing a tour in Iraq with the New Mexico Army National Guard, Ayon played and sang inter-tribal songs with his fellow Native American soldiers. He was invited to play his drum and speak about the significance of being a Native American in the military as part of the Native American Appreciation event at Saddam Hussain's palace in 2007.

The drum was also used in a Cheyenne Soldier Dance for Ayon when he returned from his deployment in 2010. After returning home to complete a bachelor's in criminal justice, he taught the songs he learned as a child and shared with his military comrades in Iraq to WNMU students from tribes around the country.

"The message I hope that resonates with service members and those who have never served in the Armed Forces, is that we are the sons and daughters of our communities with a deep desire of service towards our country and fellow brothers and sisters in uniform," Ayon said. "A key take away from this documentary is that all veterans and citizens of this country should continue to strive and find purpose in service towards our nation and our communities. This is what has made America great and strong and only through this continued service will our land prosper and we — as the inhabitants of this great nation — will find our own true purpose."

November is Native American Heritage Month and Ayon recently celebrated Indigenous Peoples' Day with his wife, Nina, at his home in Raton, N.M. He is a deputy with the Colfax County Sheriff's Office and also coaches high school football at Raton High School. The Ayons have four children.