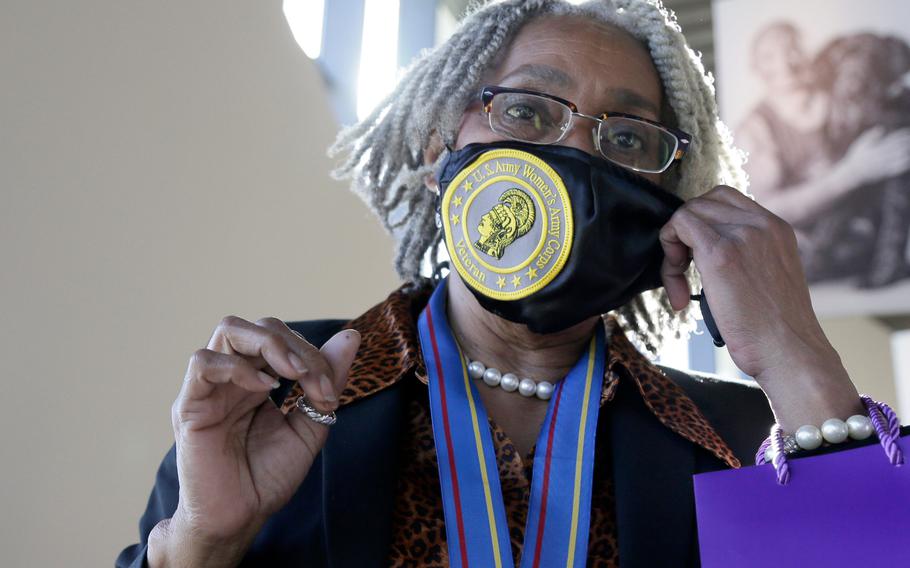 Wanda J. Dillard was one of several central Ohioans inducted into the Ohio Veterans Hall of Fame during a ceremony on Monday, Oct. 18, 2021, at the National Veterans Memorial and Museum in Columbus. She is an Army veteran and was the first Black woman to command a medical unit in the Ohio National Guard. (Barbara J. Perenic, The Columbus Dispatch/TNS)

COLUMBUS, Ohio (Tribune News Service) — On the afternoon of the death of Colin Powell, Wanda Dillard couldn't help but reflect on the impact the four-star general and first Black secretary of state had on her life.

Dillard, an Army veteran and the first Black woman to command a medical unit in the Ohio National Guard, said she had many African American soldiers and veterans to thank for paving the way for her success in the military and beyond.

"When you think of the courageous people who came before you ... I cherish the fact that I've had the opportunity to stand on their shoulders and go through the doors they've opened," said Dillard, an East Side resident who also served as a medic and respiratory therapist and was a member of the U.S. Women's Army Corps. "They've helped you open doors even further for others."

Dillard, who retired as a major in the National Guard, was one of 12 veterans inducted into the Ohio Veterans Hall of Fame 2021 Class during a ceremony at the National Veterans Memorial and Museum on Monday. Several elected officials, including Ohio Gov. Mike DeWine, attended the event.

Eight other honorees will join them during two other induction events being held in other parts of the state later this year. (This year's celebration events for the 20 veterans were spread out due to the pandemic.)

The hall of fame honor, which began in 1992, is awarded to Ohio servicemen and women for the tremendous work — both professionally and philanthropically — they accomplish following their military careers, said Deborah Ashenhurst, director of the Ohio Department of Veterans Services.

"Their service in the military is just the beginning of the qualifications (for this honor)," Ashenhurst said. "This is for all they've done since they hung up their military uniform."

For example, the military helped Dillard begin a career in health care, working to break down barriers to accessing care and combat systemic racism within medicine. 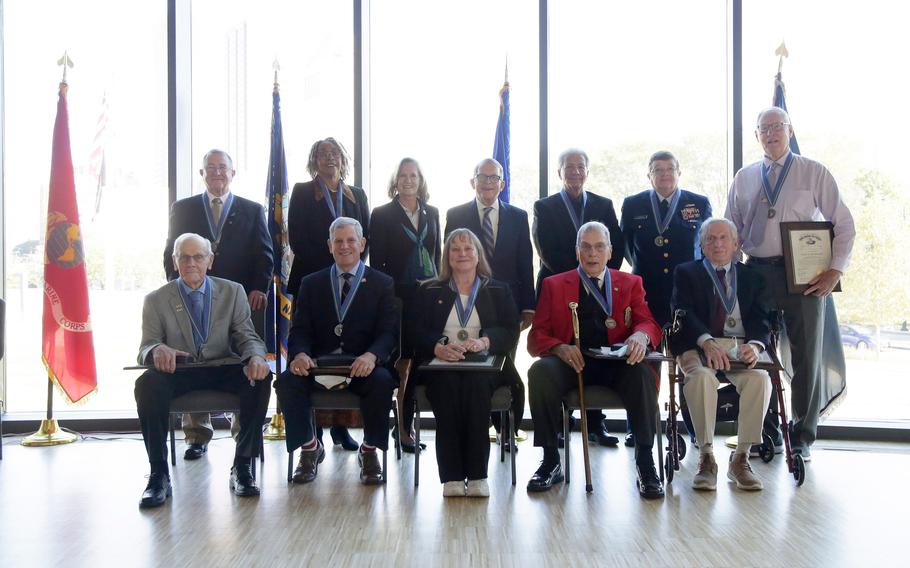 Twelve Ohioans were inducted into the Ohio Veterans Hall of Fame during a ceremony on Monday, Oct. 18, 2021, at the National Veterans Memorial and Museum in Columbus. (Barbara J. Perenic, The Columbus Dispatch/TNS) 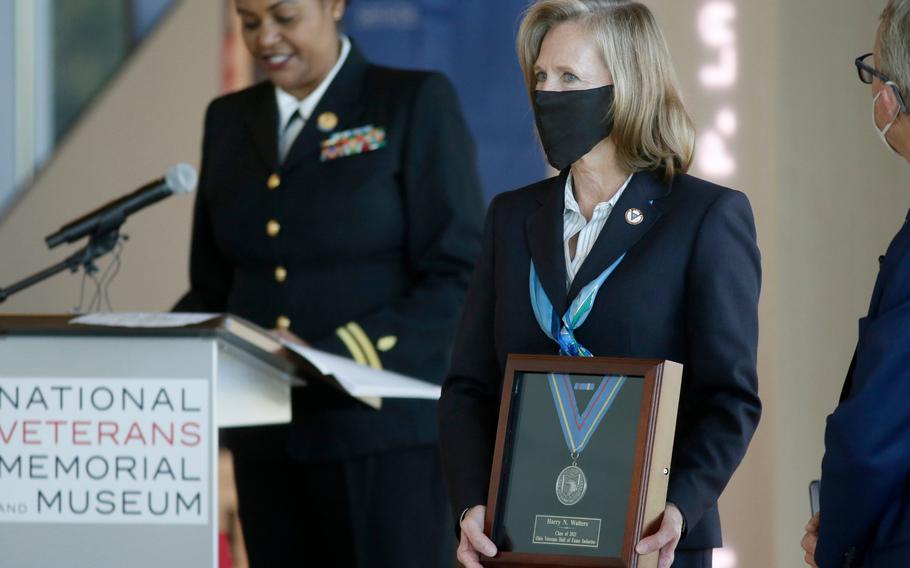 Ohio Department of Veterans Services Director Deborah Ashenhurst holds up the medal for Harry N. Walters (U.S. Army/USAR), who was posthumously inducted into the Ohio Veterans Hall of Fame during a ceremony on Monday, Oct. 18, 2021, at the National Veterans Memorial and Museum in Columbus. (Barbara J. Perenic, The Columbus Dispatch/TNS)

The 68-year-old became emotional when talking about all the hard work that has gone into her careers in the military and health care and being recognized for it alongside so many other exceptional veterans.

"It makes you wonder what the military instills in you," Dillard said. "It makes you want to give back and take care of those less fortunate than you. In the military community, you never leave a soldier behind. That comes into mind when you think about community service."

Although all very service-oriented, the veterans' stories varied greatly.

The 20 honorees, who join 915 other Ohio veterans enshrined in the hall of fame located in the Riffe Center, represent all branches of the military and hail from 13 different counties in the state. They range in age from 25 to 95, with five being given the award posthumously. Three inductees are women, including Dillard.

Ted Barrows, a Franklin County Municipal Court judge since 2003, joined the Army right out of high school as a second-generation member of the 82nd Airborne Division.

Like many of his fellow hall of fame class members, Barrows, who was honorably discharged as a staff sergeant, has had a passion for helping other veterans. The Hilliard resident has done this through his work as an attorney and judge, including efforts to rehabilitate at-risk, justice-involved former service members.

U.S Navy veteran Nickolas Sunday, 71, has served more than 3,000 veterans since 2014, helping them find employment and setting them up with services to help with food or utility bills. The Reynoldsburg resident attained the rank of 2nd Class petty officer. 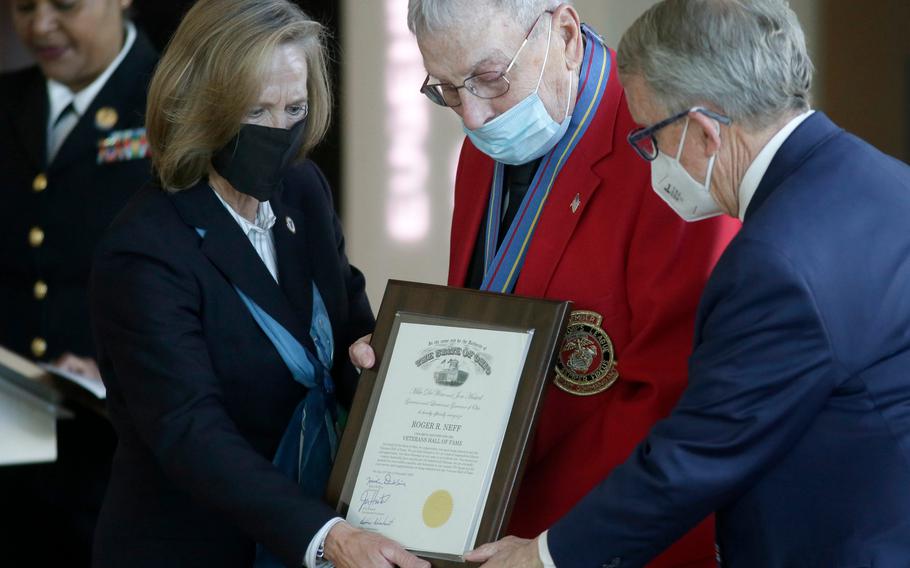 Twelve Ohioans, including Roger R. Neff retired from the U.S. Marine Corps, were inducted into the Ohio Veterans Hall of Fame during a ceremony on Monday, Oct. 18, 2021, at the National Veterans Memorial and Museum in Columbus. (Barbara J. Perenic, The Columbus Dispatch/TNS)

The final local veteran honored, Michael Ferriter, is more used to doling out the veteran awards than receiving them. The Army veteran is the founding chief executive officer and president of the museum where the hall of fame induction was held.

Ferriter, a 35-year soldier who obtained the rank of lieutenant general, said he subscribes to the philosophy that if one can help, he or she should. But the 64-year-old, of Harrison West, also was quick to point out that the support of others is what allowed him to be honored Monday.

"Everything I accomplished is the result of the fantastic people in this museum," Ferriter said. "It's the young men and women, who get it done no matter what, through personal hardship and sacrifice."

Besides the four from Franklin County, here are the other eight veterans honored in Monday's ceremony: