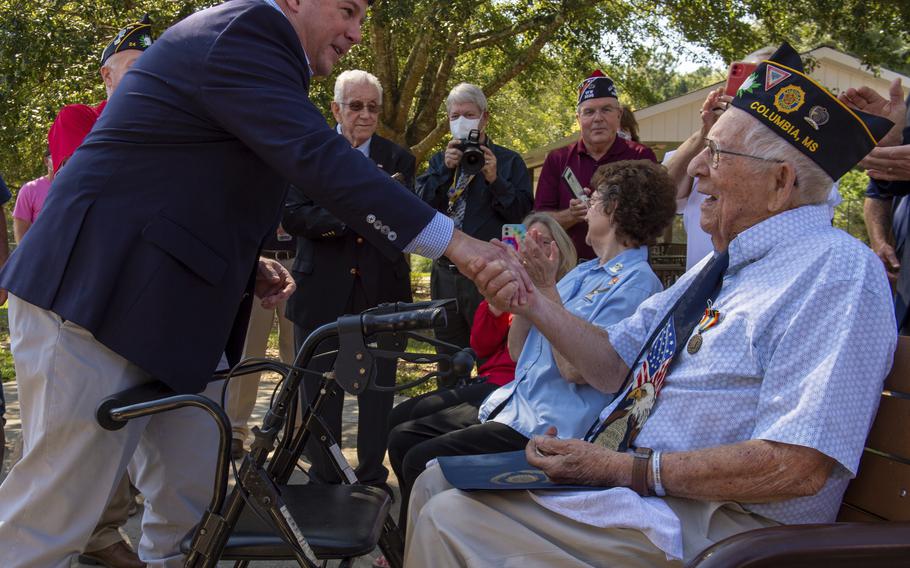 COLLINS, Miss. — One memory Henry "Howard" Bennett has held on to for over 70 years is when his B-24 bomber flew low over Omaha Beach during the invasion of Normandy. He'll never forget how the waters were red with the blood of his fellow servicemen.

On Oct. 7, Bennett, 98, of Sumrall, was awarded the Medal of a liberated France at the State Veterans Home in Collins. The award is presented on behalf of the French government to those who helped free France from Nazi occupation during World War II.

A staff sergeant in the Army Air Corps, Bennett was initially drafted and trained as a mechanic before serving as a nose gunner, participating in 30 missions during his military career from 1943-45. Bennett was part of several battles and campaigns, including the Air Offensive of Europe, the allied invasion of Normandy, Northern France and the Rhineland Offensive, according to remarks from Kevin Kelly, Laurel city councilman and Mississippi VA service officer.

"This is France's way of telling American servicemen thank you, to express our gratitude for their sacrifice," said Keltoum Rowland, France's honorary consul to Mississippi and lecturer of French at the University of Southern Mississippi.

"I wanted to express my gratitude to Mr. Henry Howard Bennett. He is a hero. These men are our heroes, and France will never forget."

"When we look back and we see all the things that we have... we owe it to one generation," Palazzo said. "You left everything — your farms, left your family — and you went over there and fought. And to be a nose gunner in a B-24 Liberator? Look, this isn't a ride at Walt Disney, this is the real deal...You got a front-row seat there, and to do that for 30 missions?"

In addition to the medal, Bennett also received an American flag from Mississippi Veterans Affairs that flew over the state Capitol, and awards from American Legion Post 90 in Columbia, of which he is a member. Palazzo also presented Bennett with a new challenge coin designed to honor Mississippi service members.

Bennett previously was awarded the Distinguished Flying Cross, an Air Medal with 3 Oak Leaf Clusters and the Good Conduct Medal.

"It's a huge honor," said Sue Long, Bennett's daughter. "We've always been very proud of him."

Despite the accolades, Bennett said he was simply doing his duty.

During the ceremony, Bennett recalled his time as a nose gunner.

On one mission over Berlin, Bennett's plane took a direct hit during a "barrage of anti-aircraft fire," he said, that "sounded like hail on a tin roof." After his plane was hit, it rolled over and plunged "like a rock" before the crew was able to recover the plane, "at treetop level."

"By the hand of God, he wasn't ready for me yet," Bennett said.

In the coming weeks, Bennett also will be awarded the Legion of Honour, France's highest degree of merit. He will be knighted and receive a certificate signed by the president of France.