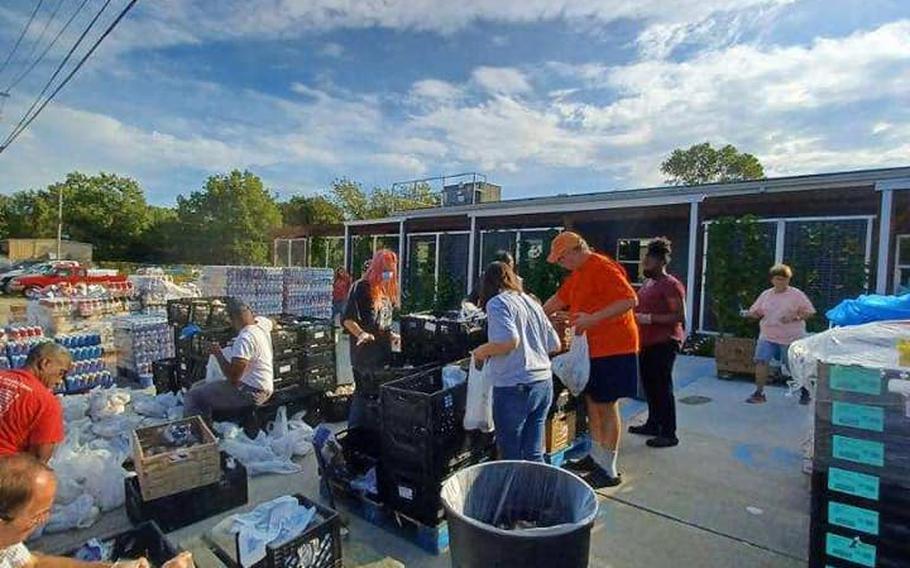 FORT SMITH, Ark. (Tribune News Service) — While volunteering with Antioch for Youth & Family, a food pantry and outreach center, Army veteran Jay Witt made a connection and witnessed the impact of the nonprofit organization on people's lives.

Witt helped to distribute food at Nelson Hall Homes, a housing development for individuals with low incomes and disabilities. One resident did not answer, so the volunteers left the food outside his door.

"We were turning the van around, and he came up at the door, and he can't walk," Witt said. "He's on his knees. I said, 'Let me out,' and I went over there and helped him take everything in the house."

"He was starving," Witt said. "Before I got all the bags in the house, he done ate a loaf of bread and a drink. ... He can't physically go out and (get) groceries, so now I know when we go to that apartment to make sure we take it in for him."

Witt, an eight-year Army veteran, attests to the importance of connection and the value of Antioch for Youth & Family in his own life and the lives of others.

He has served at Antioch for about four months and continues to pass on the support he has received.

"I haven't met one person here that hasn't appreciated the donation that they're getting," he said.

After moving to Van Buren four years ago, Witt first heard of Antioch during a distribution at Martin Luther King Park in Fort Smith.

In May, "COVID about killed me and my wife both, and we live on my social security, so we came [to Antioch] for a donation," he said.

A few days later, when the organization hosted a distribution outside its building, Witt jumped in and started volunteering.

He now regularly volunteers three days a week, driving and picking up food for Antioch to distribute to schools, veterans and families experiencing food insecurity.

Due to multiple surgeries and limitations with arthritis, Witt divides his time into about three hours each day.

"I'm 80% disabled from the Army, but I try to do what I can do ... because it is rewarding to yourself and other people you are donating to," he said.

Through volunteering, Witt has formed relationships that have positively impacted his mental health.

"I have depression and anxiety real bad, which I take medicine for, but it's helped me get out a little bit," he said. "... You meet people and then you'll see them again a week or two later and (that) just kind of helps with my anxiety and stuff like that. Just knowing that I'm helping somebody that needs help."

Along with serving as a driver, Witt volunteers with the veteran's pantry when he is able. The monthly program is designed to support veterans and their families, "which is good because they get a little bit of everything," Witt said.

The distribution serves 800 individuals in veteran households each month, Charolette Tidwell, founder and director of Antioch for Youth & Family, said.

At 11 a.m. on the fourth Friday of every month, veterans drive their vehicles to the back of the Antioch building. The food is placed into the vehicle's trunk.

Witt said the most rewarding time to serve at Antioch has been the Wednesday distributions when the nonprofit hosts a "Pop-Up at the Curb." During a typical weekly drive-through, the organization passes out food to around 2,000 people.

"You see different people, all walks of life," Witt said. "You get to know them, even though you only talk to them for like five seconds, but you get the face-to-face."

"If any veteran's got time, they need something to do, come down here and volunteer," he said. "Antioch [would] really appreciate it, and it'd make them feel good about what they are doing."

Catherine Nolte is a corps member with Report for America, a national service program that places journalists into local newsrooms. She can be reached at cnolte@swtimes.com.