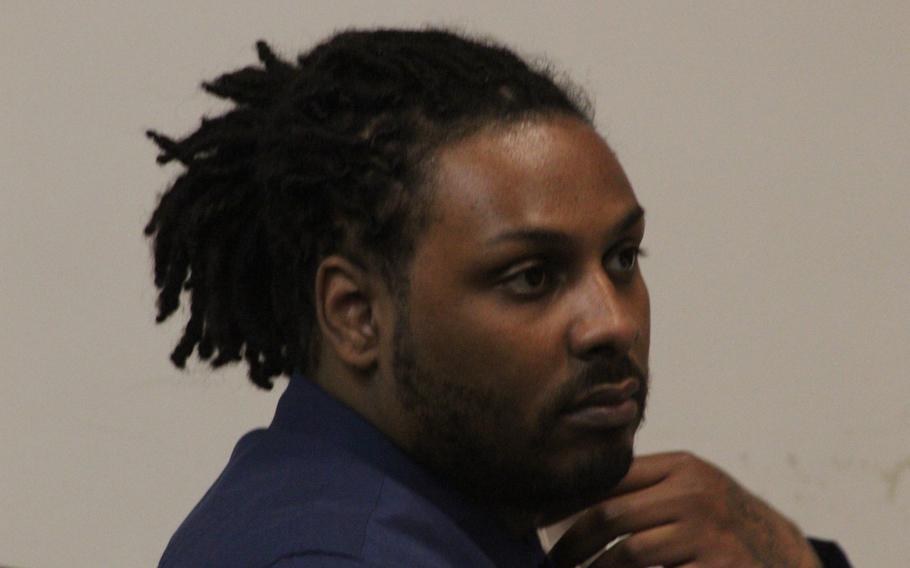 DAYTONA BEACH, Fla. (Tribune News Service) — A U.S. Army veteran thought he was helping a stranded motorist whose car was mired in a ditch in Deltona on Veterans Day in 2017. But the stranded motorist was actually a hired assassin and his target was the veteran himself, prosecutors said Tuesday.

Benjamin Jaquaric Antonio Bascom, 28, is on trial this week charged with first-degree murder in the slaying of Carlos Cruz-Echevarria, 60, on Nov. 11, 2017. He is also charged with witness tampering because prosecutors said he tried to get his girlfriend not to help investigators in the case.

Assistant State Attorney Joe LeDonne described the alleged plot to the jury during opening statements in the courtroom of Circuit Judge Matt Foxman at the S. James Foxman Justice Center in Daytona Beach.

LeDonne said Bascom's passenger car was in a swale on Malaga Avenue, near Cruz-Echevarria's home in Deltona.

"He got the vehicle stuck in a ditch and he waited for the victim, in this case, Carlos Cruz- Echevarria, to drive by and offer his help," LeDonne said. "And when the defendant was ready and the victim was in the perfect position, the defendant shot the victim four times execution style and left him on the side of the road to die."

LeDonne said that the man who wanted Cruz-Echevarria dead was Kelsey McFoley. McFoley was facing a possible prison sentence in a road rage case in which the only witness and victim was Cruz-Echevarria.

LeDonne said that prosecutors would present evidence to show that McFoley enlisted Bascom to kill Cruz-Echevarria.

McFoley, 28, went on trial in 2019 and was convicted of first-degree murder and sentenced to the mandatory life in prison without parole.

McFoley's girlfriend at the time, Melissa Rios-Roque, 24, is also charged with first-degree murder in Cruz-Echevarria's slaying. At the time, she was pregnant with McFoley's child. She is being held at the Volusia County Branch Jail while she awaits trial.

McFoley was under investigation by the FBI in an unrelated case and the feds found he had pictures on his cellphone of a police report and witness list about the road rage incident containing Cruz-Echevarria's address.

Before the killing, prosecutors had offered McFoley a deal of three years in prison in exchange for a guilty plea to the road rage. Now, he faces life in prison.

"The evidence is going to show that Mr. Bascom absolutely could not be the person who shot Carlos Cruz-Echevarria," Massa said.

Massa added that a detective looking for evidence found no DNA car or fingerprints belonging to Bascom in the car in the ditch. The car had been stolen, according to investigators.

"They never found Mr. Bascom's fingerprints in any part of that car," Massa said.

But LeDonne, who is prosecuting the case along with Assistant State Attorney Andrew J. Urbanak, said that investigators did find a partial print from Bascom on a gasoline container.

A detective later showed jurors the red plastic gasoline container found in the backseat of the stranded car on which investigators found the print.

Among the witnesses on Tuesday, prosecutors called to the stand criminal defense attorney Robert Rawlins III, who was representing McFoley in the road rage case in which Cruz-Echevarria was the victim and the lone witness.

Under questioning by Urbanak, Rawlins said he told McFoley that it was a bad case for prosecutors because it was one person's word against the other.

"I told him it was a very weak case. We should beat it no problem," Rawlins said.

The documents prosecutors provided to the defense as part of the discovery process in the road rage case against McFoley contained an address for Cruz-Echevarria, Rawlins said in response to another question.

Under cross examination, Massa asked Rawlins if the discovery documents included a photograph of Cruz-Echevarria. Rawlins said he did not recall a photo of him being among the documents.