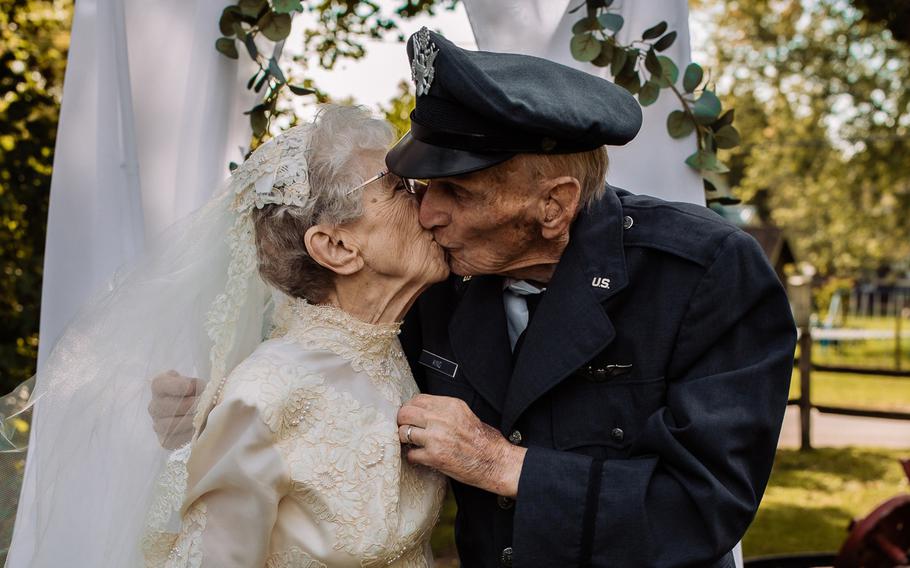 Frankie donned a vintage 1940s dress, and Royce wore his Air Force uniform. They were married in 1944. On Sept. 24, 2021, the couple celebrated their 77th anniversary with a wedding-style photo shoot. (Hilary Michelson/St. Croix Hospice)

By 1944, the Allied forces were gaining victories while World War II raged on. But on the other side of the Atlantic, a soon-to-be-deployed U.S. Army Air Forces pilot and his high school sweetheart were saying “I do” in Oelwein, Iowa.

The Sept. 16, 1944, wedding at Grace United Methodist Church was quick and simple — Royce King was on a two-day leave before serving overseas. Frankie, his betrothed, wore a tailored suit instead of a gown. A photographer was not there to take snapshots of the loving couple.

A war, two kids, four grandchildren and several great-grandchildren later, the couple in their 90s celebrated their 77th wedding anniversary this year. The lack of an extravagant ceremony had not hampered their life together, but when staff members at St. Croix Hospice — who take care of the couple at their Oelwein home — learned there were no photographs to commemorate the Kings’ special day, they hatched a plan that included a vintage dress, 1940s hits, lots of photos and a cake.

There were no dry eyes on Sept. 24, said Sue Bilodeau, the Kings’ daughter.

“It was definitely one of the most special things ever,” she said. “When Mom mentioned she didn’t have time to plan a big wedding and didn’t have a photographer, the St. Croix staff members worked together to make sure they could get their special day.”

The couple’s backyard served as the venue where the hospice’s staff held the celebration — complete with a wedding cake with two seven-shaped candles. They decorated an arch with flowers and made a bouquet for the 97-year-old bride, who was clad in a vintage 1940s wedding gown and sporting a new hairdo from the salon. Bilodeau, who happened to be visiting from Chico, Calif., helped her mother into the dress.

Like in other weddings, the groom was not allowed to see his bride before the ceremony. Royce, 98, was helped into his Air Force uniform by staffers, and waiting outside with a handkerchief over his eyes for the big reveal.

“We walked Mom down the back steps and across the yard, and then she stood in front of Dad, and I said, ‘Are you ready to see your bride?’ before taking off the handkerchief,” Bilodeau said. 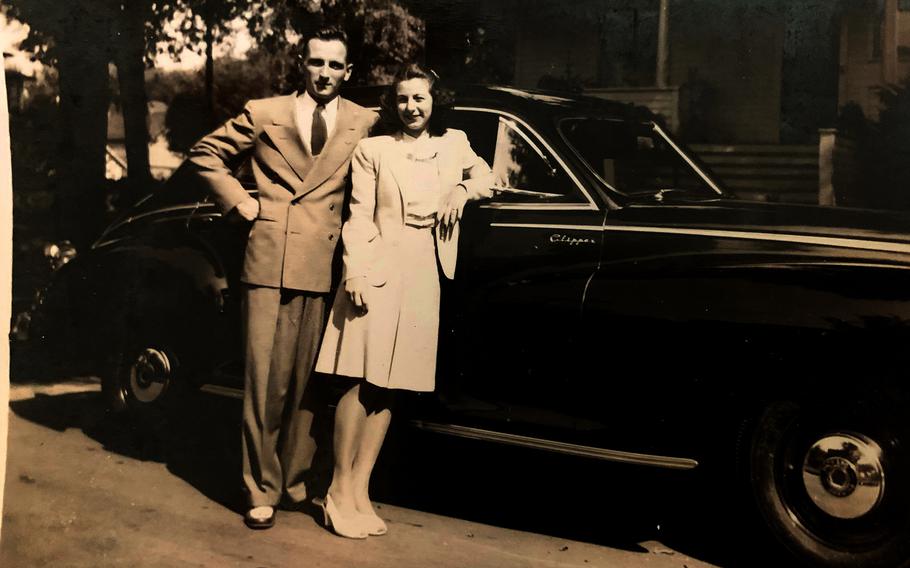 Frankie and Royce King were high school sweethearts. After a 20-month-long engagement, they got married on Sept. 16, 1944. (Sue Bilodeau) 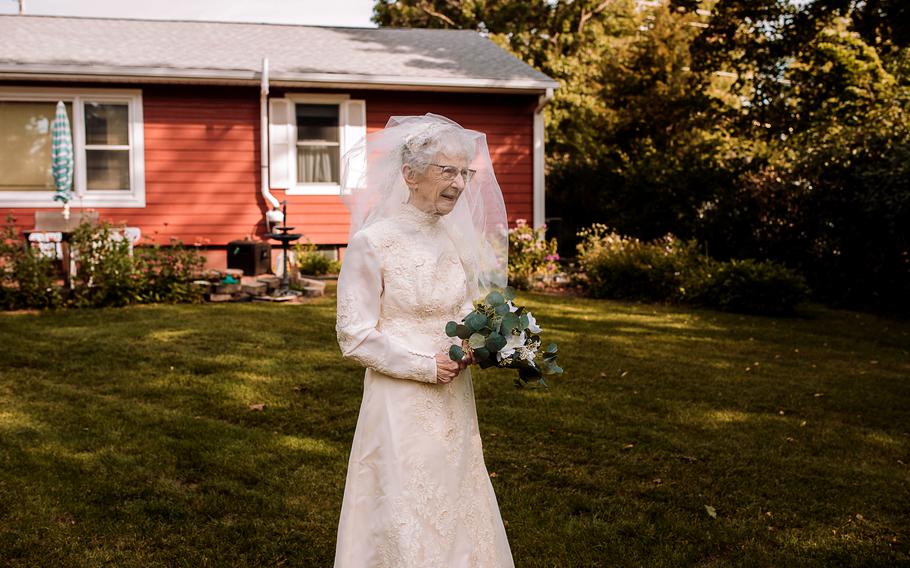 Frankie King, 97, was not able to have a photographer for her first wedding in 1944. (Hilary Michelson/St. Croix Hospice) 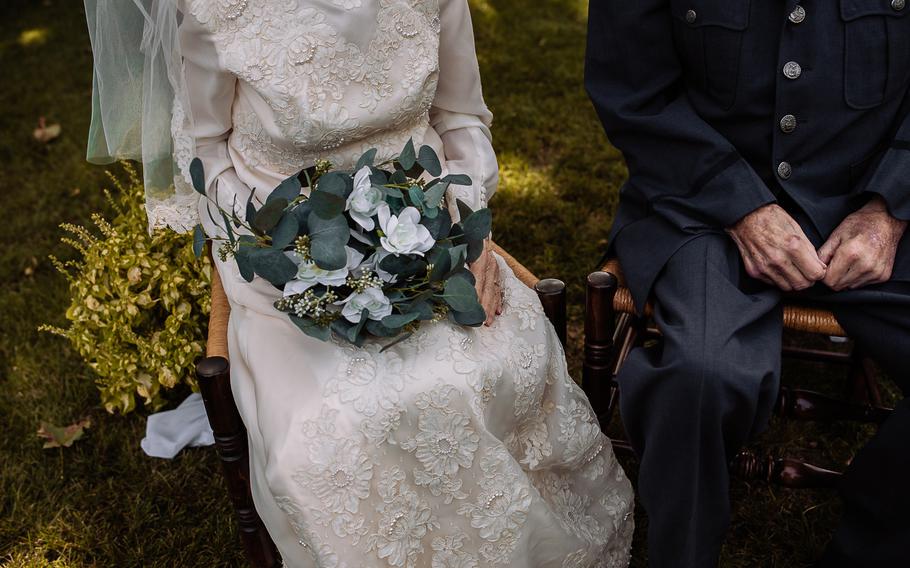 The couple and staff were transported back through the decades as the Kings’ music therapist played 1940s tunes on his saxophone and guitar during the celebration. Hilary Michelson, who works at St. Croix Hospice and is a part-time photographer, snapped the loved-up couple throughout the day.

“Absolutely no shame in the fact that I had a hard time keeping it together behind the lens,” Michelson wrote on Facebook.

The staff members at St. Croix Hospice have provided care to the Kings for almost a year, and their bonds have blossomed, said Trish Matthews, a case manager at the hospice who has gotten to know the Kings closely after visiting the couple at least twice a week.

“They really are a fantastic couple, and it is such an honor learning from them,” she said.

Amid the constant flood of gloomy news that has overtaken the year, the event exemplified to Heath Bartness, St. Croix Hospice’s CEO, “how there’s still so much kindness in the world.”

“The team really wanted to do this, and it’s amazing,” he said. “They provide such a wonderful care that can truly impact people.”

Royce and Frankie met each other in high school, where they both played in the band, their daughter said. They had been engaged for 20 months, while Royce was stationed in Lawrenceville, Ill., and Frankie attended Cornell College and the University of Iowa.

“He had always dreamed of flying,” Bilodeau said. “Then, during World War II, he was a carrier pilot in a Douglas C-47 plane with operations over the Himalayas.”

Royce, his daughter said, is a doting husband and father who loves to strike up conversations with “anyone and everyone.” Her mother, she said, has the “gift of making everyone feel at home” — often delighting guests with homemade hoskas and kolaches, baked goods nodding toward Frankie’s Czech heritage.

“Together they demonstrate that a great love takes kindness and perseverance,” she said.

That love was evident when Royce’s handkerchief was lifted from his eyes and he was able to see the woman who has been by his side through war, peace and everything in between.

“He was just absolutely beaming,” Bilodeau said of her father looking upon his bride in a wedding gown — a sight he did not get to see 77 years ago but will be able to cherish in a photo album his daughter is compiling.