An Air Force veteran became ‘Cheer Dad’ and went viral. He’s still cheering and his daughter is no longer embarrassed 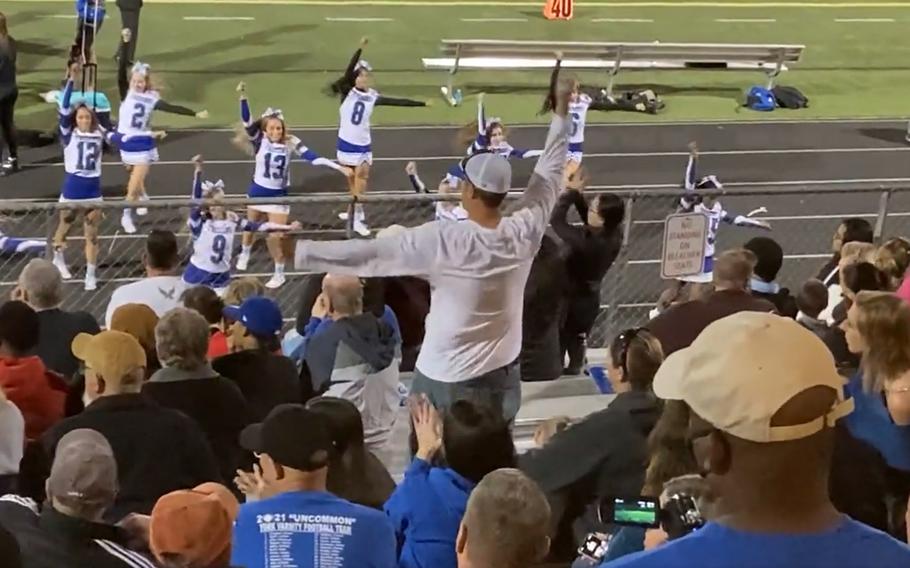 Retired Air Force Major Rolland “Hekili” Holland, known as “Cheer Dad,” performs in sync with the cheerleaders from his daughter’s high school in Yorktown, Va. in this screenshot taken from an Oct. 1, 2020 video posted to social media. (Twitter)

YORKTOWN, Va. (Tribune News Service) — Cheerleading created a unique bond between Air Force Major Rolland “Hekili” Holland and his daughter Mackenzi, a York High senior who longed for more time with her dad growing up as his military duties often took him from home.

Holland, 41, who retired from the Air Force last week after 24 years, learned to mimic the moves of Mackenzi and the other Falcons’ cheerleaders. So, high kick included, Holland, known as “Cheer Dad,” performs in sync with the girls from his place in the stands as the marching band plays the school fight song following each York touchdown on Friday nights.

“When I was younger, I hated it and was embarrassed,” Mackenzi Holland said. “But as I got older, I realized it was him loving what I do and supporting me.

“It shows a side of military families that nobody sees. It shows that a dad can create a bond, stay connected and support his daughter, even when he goes off to serve his country.”

Millions have seen Holland’s example. Two years ago, Scott Willard, a York baseball star in the early 1990s, recorded Holland’s act during a Falcons football game and it went viral on YouTube.

A Daily Press and Virginian-Pilot video of Holland cheering to the fight song following a touchdown in the Falcons’ win Friday on Twitter has generated more than 13 million views on various national sites. Holland is preparing for another whirlwind of publicity.

“After the show he asked Mackenzi how the football team at York was doing, and when she said they were undefeated and about to play their first playoff game, he made a video to encourage them,” Holland said of Strahan, a star defensive lineman who won a Super Bowl with the New York Giants. “Then he talked to Mackenzi for a half-hour about how it was like for him being from a military family, how it can suck sometimes, but also about how it can help you out and make you better.

Holland says if this latest “Cheer Dad” video going viral leads to similar recognition “We’ll roll with it, enjoy our 15 minutes (of fame) and then go on our way.”

That’s inevitable, because Mackenzi is a senior and will move on to college next year to begin her trek toward becoming a doctor in audiology. Holland, who began a new career this week working on Air Traffic Control simulators, says he’ll miss the environment where he becomes “Cheer Dad.”

But, alas, that retirement might only be temporary. His daughter Brayanna, 14, will have none of his antics at her York High softball games, but daughter Jaymi, 7, is a cheerleader for the York-Seaford youth football team.

“‘Cheer Dad” might come back when Jaymi gets to high school,” he said. “But, if she’s embarrassed and doesn’t want it, then I’ll just be a regular dad.”

Scores of York fans who know him as “Cheer Dad” hope he revives the act someday. Mackenzi certainly thinks it’s been a good thing, for her and for cheerleading.

“Cheerleading is so underrated, so when the video went viral two years ago, it really just set a new level to what cheerleading is and what cheerleaders do,” she said. “I’m so happy this (Daily Press/Virginian-Pilot) video is going viral, because it tells our family’s story again.”

So, how would Mackenzi rate dad as a cheerleader?

“He’s definitely improved,” she said. “The kick could be higher, but he’s on the level of a high school cheerleader, now.”