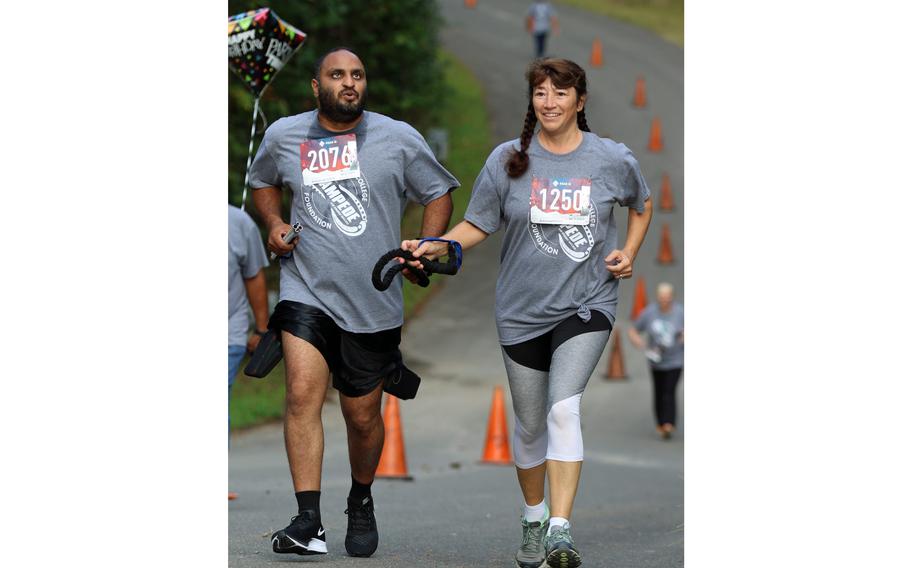 DALLAS, N.C. (Tribune News Service) — The sound of Angus Kola’s feet striking the pavement as he runs helps remind the blind former combat medic he can achieve anything.

And Kola doesn’t fret if he bumps into a car or two because he runs with the purpose of motivating even those with little-to-no vision to lace up their running shoes and give it a try.

The Gaston College alum competed Saturday in the inaugural Stampede for Student Success 5K run at on the college’s Dallas campus.

“It makes me feel good,” Kola said after the race. “It helps me to inspire and encourage others that they can do anything they put their mind too.”

A new outlook on life

Kola was working in Afghanistan as a United Nations traveling combat medic through the Department of Defense in 2006. On a trip to pick up medical supplies from Bagram Airfield, Kola and a group of Marines, were ambushed as their Jeep was riddled with bullets.

Kola was shot in the head. Glass and other sharp materials penetrated his eye.

It would be the last time he would see. Two others lost their lives.

“I lost my friends permanently,” he said.

Kola thinks bandits looking for cash, machinery and medical supplies targeted his vehicle. While recovering in Germany, he had to come to terms with the loss of his vision and his friends.

Kola, 35, of Gastonia, relies on a buddy system while running. But every now and then, he gets the courage to explore the world around him on his own.

His training leading up to the race was not as rigorous as others because running blind can be unsafe.

“I try to go walk by myself,” said Kola. “I can’t really run by myself because it can be quite dangerous. I do a lot of brisk walking in the neighborhood, so people have seen me walking every day. I do anywhere from two to three miles by myself. I did a lot of walking, trying to get my diet on par. I’ve been going to the gym, trying to get my cardio going.”

Still, Kola does not mind taking on the streets alone. He is simply thankful to be able to touch and hear things. In his mind, he visualizes a picturesque setting.

The sunshine hitting his back tells him of a new season coming.

“I like to get a nice breath of fresh air,” said Kola. “That is one of my favorite things to do. I like the smells and sounds of the birds. Where I walk is nothing but woods. The birds are very interesting in the sounds they make. You may hear a screeching owl. Some of the birds sound like sirens. I can tell when fall is coming because I can feel the sun on my face. It peaks through the trees because the leaves are falling.

Gaston College Police Officer Crystal Todd volunteered to help usher Kola through the course. The two participated in a practice run a couple days before.

“I thought it was the right thing to do,” said Todd. “It’s a good thing to help the community and help him to meet his goals.”

Todd used a tether so Kola could have some freedom while running, but could usher him back to safety if a deep pothole or big speed bump was nearby.

The race served as a test for Todd, too. She broke her leg two years ago and has worked to get back into running shape.

“It’s been tough,” said Todd. “I’ve been trying to get motivated and this has motivated me to get out there.

Luke Upchurch, executive director of the Gaston College Foundation, said the run was a great way to invite the community to get a closer look at the school and all it offers.

“We wanted an opportunity to raise money and to showcase our campus,” said Upchurch. “A lot of people don’t get to see the Dallas campus. We want people to see the fire center and other areas. All of these areas are important to the community. They are seeing all the different training aspects we have. “

Upchurch said the Gaston College community has been supportive of Kola and said his decision to tackle the course embodies the school’s perspective on persevering through adversity.

“Angus is a wonderful reflection of what we do at Gaston College,” said Upchurch. “We are here to make everyone successful. This is what we are looking for in a student. When people heard he was going to run, they were excited.”

More than 200 people were at the starting line to compete. Robert Collea finished first with a time of 19:20. Proceeds from the run will benefit the Gaston College Foundation Fund to support scholarships, emergency funds and needs on campus.

Kola described the run as “absolutely fabulous” and thanked Todd for assisting him for the 3.1-mile trek.

“It feels incredible having to complete your first race,” said Kola. “It feels amazing. Being tethered by a pilot gives me a lot of respect because they are the ones that have to help you. And you are inspiring each other along the way.”

Kola finished 94th with a time of 54:27. He succeeded his goal of completing the course in less than one hour.

“I just want to show people I am here, and I love everybody,” said Kola. “Here in America, they believe in freedom and giving people chances. I am not blind for any reason. Even if I would have died, it was for the freedom of everyone else.”