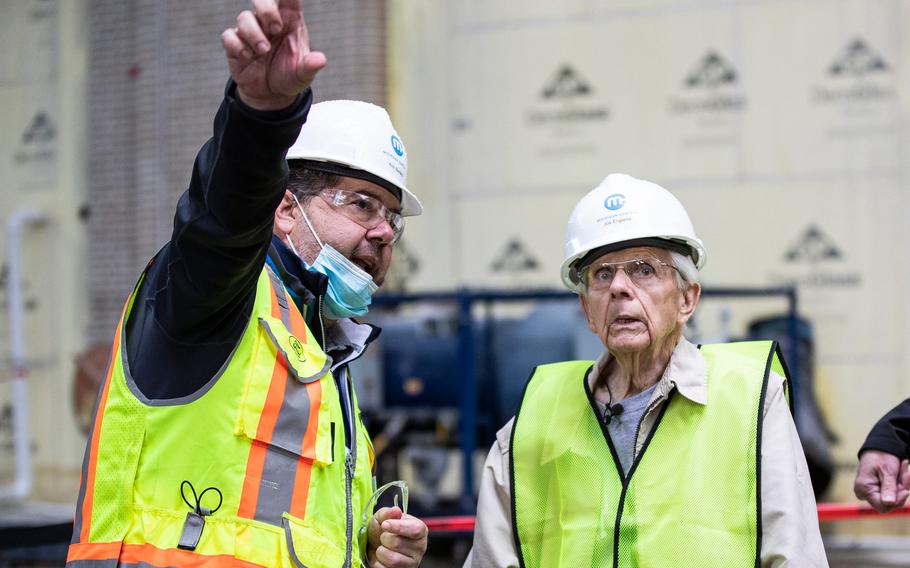 DETROIT (Tribune News Service) — The last time Joe England walked the halls of Michigan Central Station, it was 1945. His train had just steamed into the station, returning him safely from World War II.

More than 75 years later, England on Saturday found himself standing in the train hall for a different kind of homecoming. Wearing a hard hat and a neon safety vest, the 97-year-old from Westland, Mich., marveled at the ornate tiles and vaulted ceiling through a web of scaffolding.

Ford Motor Co. has spent the last few years restoring the century-old, once-abandoned train station, seeking to transform it into a centerpiece of its new innovation campus in Detroit's Corktown neighborhood.

For England, Michigan Central Station is his "icon," "landmark" and "old friend."

He grew up in Tre-Way Apartments, which once stood on 14th Street across from the train depot. The building caught fire in January 1989, according to a Free Press article published that year, and a parking lot now lies on the old site.

The station opened in 1913, the day after Christmas. A little more than 74 years after the first train pulled into the station, the last train departed in January 1988. During the decades that followed, the train depot sat empty and became a symbol of the city's decline.

In a letter to thank Ford ahead of Saturday's tour, England wrote that the company had the "foresight to see more in a weathering Detroit Michigan building ... but rather to see the real potential it actually represents today and in the future."

"And it's falling in place as we stand here and talk about it and that makes me happy," England said after walking around the site Saturday.

"If they'd had torn this building down it would have been part of my heart. It sounds silly to say that about a building but it's true," he said.

England's father, who was self-employed and a skilled electrical and plumbing worker who could build a house from the ground up, struggled to find work after the 1929 stock market crash.

England said his parents were fortunate to cross paths with the owner of Tre-Way Apartments. His father began working as a custodian, maintaining the building's 100 units, and his mother helped manage the property, collecting rent from the tenants. That's how they started living there. "It was a godsend after the Great Depression," England said.

From his family's apartment at Tre-Way, England could see Michigan Central, the tallest train station in the world when it opened.

When he was growing up, England said there was no playground in the area, so he played on the sand hills by the sides of the station. 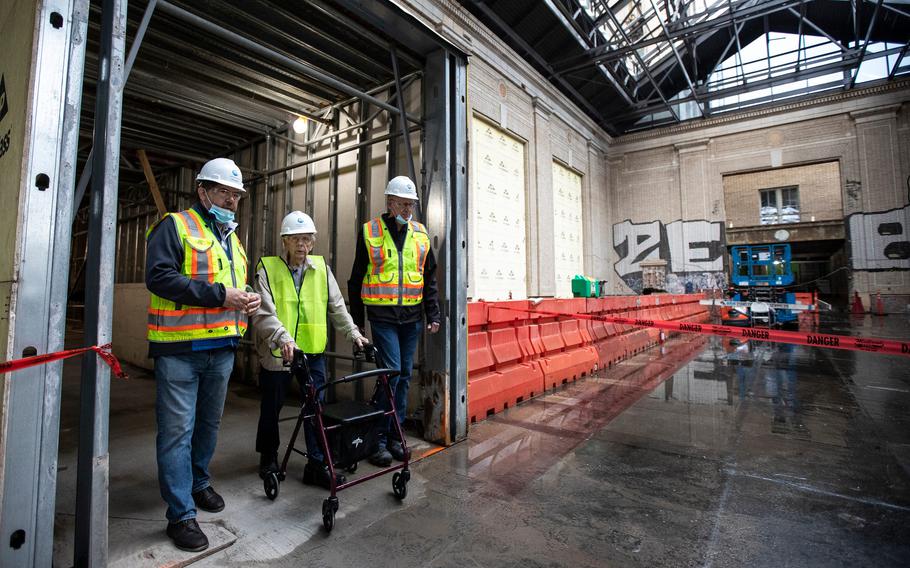 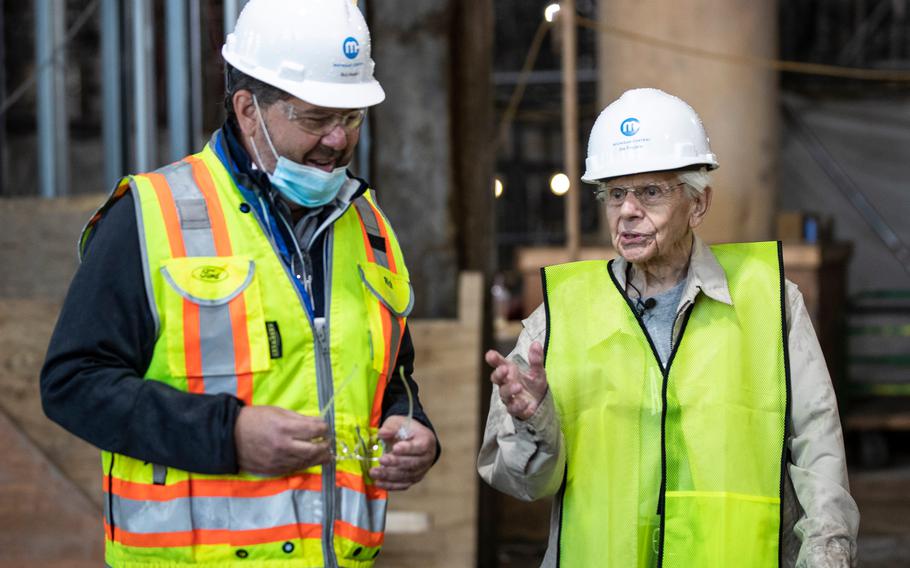 And it was the station where England, then 18, boarded a train for the first time, heading off to serve in the U.S. Army in 1943.

In June 1944, England worked through the aftermath of the D-Day invasion of Normandy, France, alongside a small team of medics. There, England said, he witnessed horrific injuries as he helped transport hundreds of bloodied soldiers to operating tents. One man had half his face missing, he said.

"I don't want to be considered a hero," England said. "I was just doing my job like any medic."

When the war ended in 1945, the private first class came home the same way he left — on a train.

He was one of many American soldiers who departed through the station. Others never made it back.

Richard Bardelli, the construction manager at Ford who led Saturday's tour, said he was moved by England's stories about WWII and the people he knew who never made it home, including his best friend.

"You get chills thinking about that," Bardelli said. "That's what this building does for people. It brings back memories of when they came and when they left."

When England returned from the war, his family had moved out of Tre-Way. Michigan Central Station was no longer a fixture of his daily life. But he still calls the station "home."

After the war, England said he took a two-year course through the GI Bill and attended an electronics school near the Fox Theatre.

"That saved my entire future," he said. "I now had a trade."

He went on to work for the University of Michigan at Willow Run, where he enjoyed an exciting career as an electronic technician.

A couple of years ago, England and his wife, Lucille, who passed away in June, drove past Michigan Central Station after spending the day on Belle Isle with a friend from church, Kathy Giles, 63, of Garden City. Giles said England started talking about his dream to walk the halls of the station again.

Attempts to get England inside the building before Ford started refurbishing it were unsuccessful. But a couple of months ago, Giles, a retired Chrysler employee, said she reached out to a former colleague who instigated the connection with Mark Truby, Ford's chief communications officer.

"In ten minutes, it was a done deal and we were on our way," Giles said.

For Bardelli, Saturday's tour reinforced the sense of responsibility he feels to restore the station that houses memories for generations of Detroiters. "Never in a million years did I think I would be lucky enough to be working on restoring this," Bardelli said.

The massive project has involved the meticulous replacement of thousands of decorative pieces in the station's waiting room, ceiling repairs and replacing hundreds of limestone blocks.

The redevelopment project has also uncovered a treasure trove of historical artifacts such as an old whiskey bottle left by plasterers more than 100 years ago, shoe polish, Stroh's beer bottles, old train tickets and newspaper pages.

Ford expects to open the newly restored Michigan Central with retail, restaurants and community gathering spaces in mid-2023. It will sit within a 30-acre Mobility Innovation District. Ford is investing $950 million in restoring historic buildings, including Michigan Central Station, that will sit on the walkable campus.

England — who has witnessed massive advancements in transportation during his lifetime, from the heyday of train travel to the rise of air travel — is excited for what the future of mobility holds.

And standing outside Michigan Central Station, he expressed gratitude that it will unfold in a monument to its past.

"It gave me the feeling that people can still have a heart for things that somebody else might kick under the rug."

Clara Hendrickson fact-checks Michigan issues and politics as a corps member with Report for America, an initiative of The GroundTruth Project. Contact her at chendrickson@freepress.com or 313-296-5743.