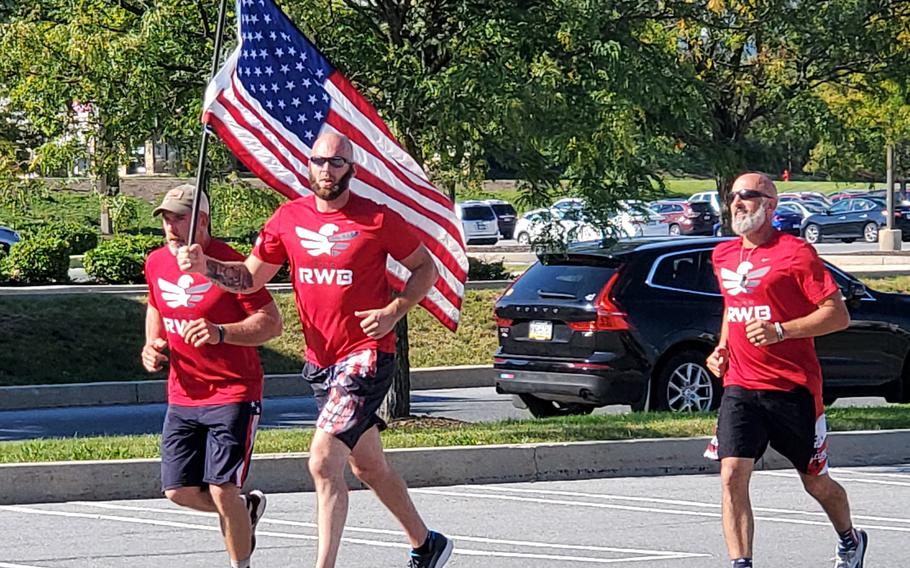 Team Red White & Blue’s Old Glory Relay started at Ground Zero on the 20th anniversary of 9/11 and will end on Veterans Day, Nov. 11, at the Mercedes-Benz Stadium in Atlanta. (Facebook)

FREDERICK, Md. (Tribune News Service) — It may sound counter-intuitive, but Will Plumley — assistant garrison commander at Fort Detrick — says he runs faster and farther when he's carrying the American flag.

For one, it's the closest he's going to get to the Olympics, he joked. But it also gives him the opportunity to display and honor the flag. It feels great when people honk their horns or wave when they drive past him.

Sometimes, Plumley will do an individual "flag run" in Adamstown, where he lives. On Sunday, though, he joined a race that will eventually encompass some 5,000 veterans and stretch across nine different states: the "Team RWB Old Glory Relay."

"It's a chance to show our support for our country and our flag," said Plumley, who retired from the Army in 2004. "And our veterans, whether they served one year of 30 years."

Team Red White & Blue is a nonprofit with chapters all around the world that aims to support active-duty service members as they transition out of the military through fitness and social activities. Its Old Glory Relay started at Ground Zero on the 20th anniversary of 9/11 and will end on Veterans Day, Nov. 11, at the Mercedes-Benz Stadium in Atlanta.

Monday morning, the relay will continue from Frederick to Baltimore, she said.

At around 5 p.m. on Sunday, as the sun was just beginning to set, Plumley and other relay participants and their supporters gathered at The Vitamin Shoppe on Urbana Pike for a small celebration. The supplement store will be donating up to $50,000 to Team RWB throughout the course of the relay, adding $1 with each purchase of five of its brand partners: Force Factor, Isopure, Lean Body by Labrada, LifeAid and Optimum Nutrition.

Plumley started running at around 2:30 p.m., eventually hitting 10 miles, he said. His daughter, Christina Plumley — an active Army service member who lives in North Carolina — joined him for the last five. After passing the flag off to one another as they ran, they held it together at the end of their turn, Will Plumley said.

At one point, as they ran past a neighborhood, they could hear a group of kids cheering with their parents, "Go America! Go America!" Christina Plumley remembered, laughing beneath a black mask.

Just past 5 p.m., Jose Flores of Westminster ran through the parking lot, the flag streaming over his shoulder. He had just completed about four miles and was feeling good, he said with a hearty, contagious laugh. Tired, but good.

Willie Jenkins, commander of the American Legion Francis Scott Key Post 11, and Otis Smith, 1st vice commander, drove out to The Vitamin Shoppe to support Flores as he finished his leg of the relay. Jenkins shook his head, laughing, when asked if he was a runner.

Kevin McGlynn — captain of Team RWB's Frederick chapter and the "M — A — N," according to Flores — described the nonprofit's purpose as enriching and engaging veterans. He and others who work with the organization want to help veterans connect with one another and regain the sense of camaraderie that many miss from serving in the military.

And, he added, you don't have to be a veteran to get involved.

"Anyone can join at any skill level," he said. "It doesn't matter if you run or walk or crawl or if you just want to go and have a coffee. We're there to help out. The main thing is having that desire to come."