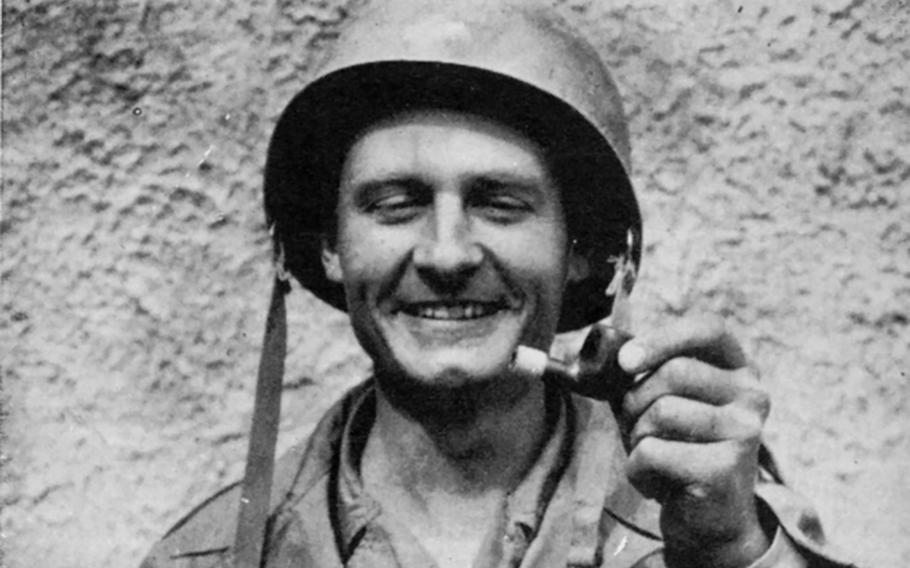 U.S. Army chaplain Fr. Emil Kapaun died in a prisoner of war camp in Korea on May 23, 1951. On April 11, 2013, former President Barack Obama posthumously awarded Kapaun, credited with saving hundreds of soldiers during the Korean War, the Medal of Honor. (U.S. Army)

The remains of The Rev. Emil Joseph Kapaun, a recipient of the Medal of Honor who is a candidate for sainthood at the papacy in Rome, arrived on Saturday at Wichita Dwight D. Eisenhower National Airport.

Family members, members of the U.S. military and Bishop Carl Kemme, of the Catholic Diocese of Wichita, accompanied the remains, which were in an unmarked grave in Hawaii and not identified until earlier this year.

Kapaun served as a priest in the Catholic Diocese of Wichita before he became a U.S. Army chaplain during World War II and the Korean War. Many accounts exist of how Kapaun risked his life to save others on the battlefield, always bolstering their faith.

In November 1950, Kapaun was captured and became a prisoner of war in North Korea. Although locked up with little food and afflicted with lice, he continued to inspire others, telling them they must never lose hope.

The Diocese of Wichita has gathered documentation of miracles ascribed to Kapaun. They are now awaiting word from Rome as to whether he will become a saint.

Nick Dellasega, of Pittsburg, was one of Kapaun's miracles.

"My heart stopped. People prayed to Father Kapaun. I was gone, flatlined, and then I wasn't," Dellasega said. "He saved my life and interceded."

Dellasega watched as Kapaun's remains exited the plane at around noon. He said God had the timing right — Kapaun lived, died and came home at the right moment.

Bishop F. Richard Spencer is with the Archdiocese of Military Services and serves in Washington, D.C. He was a military chaplain for 34 years, often praying for Kapaun's intercedence.

"I walked the ground where he was held prisoner," Spencer said. "I prayed at that location five times."

Spencer, who was present at the tarmac to welcome the beloved priest home, said this is an extraordinary moment.

"I am really humbled now to be at his homecoming," Spencer said. "This is a moment of bliss."

The Rev. Kapaun's remains were placed in a casket, draped by a U.S. flag. His great niece, Christina Kapaun Roberts, of the U.S. Air Force, stood by the casket. Her sister watched as the casket was handed off to military pallbearers.

"We are extremely proud," Cindy Kapaun said. "This is very emotional."

Kapaun's remains rode in a hearse to his home parish of St. John Nepomucene in Pilsen for a private homecoming. From Pilsen, he will be brought back to Wichita to the Cathedral of the Immaculate Conception, where his remains will stay until the rosary, vigil, Mass, procession and burial beginning on Tuesday.

Vigil Service will be at 7 p.m. Tuesday, Hartman Arena. Tickets are needed for the free event.

Mass of Christian Burial will be at 10:30 a.m. Wednesday at Hartman Arena. Tickets are needed for the free event. The funeral may be livestreamed as well.

Procession to the Cathedral will take place from 1:30 to 2 p.m. Wednesday. Following the Mass of Christian Burial at Hartman Arena, Father Kapaun's remains will be transported by horse-drawn carriage from Veterans Memorial Park to the Cathedral of the Immaculate Conception, where he will be laid to rest. Taps and a 21-gun salute will be given.

Participants may line the route beginning at Central Avenue just east of Veterans Memorial Park and proceeding east until Main Street. The final stretch from Main Street to Broadway will be reserved for students from the Diocese of Wichita.