After jumping out of airplanes, Alejandro Villanueva jumps into a new role with the Ravens 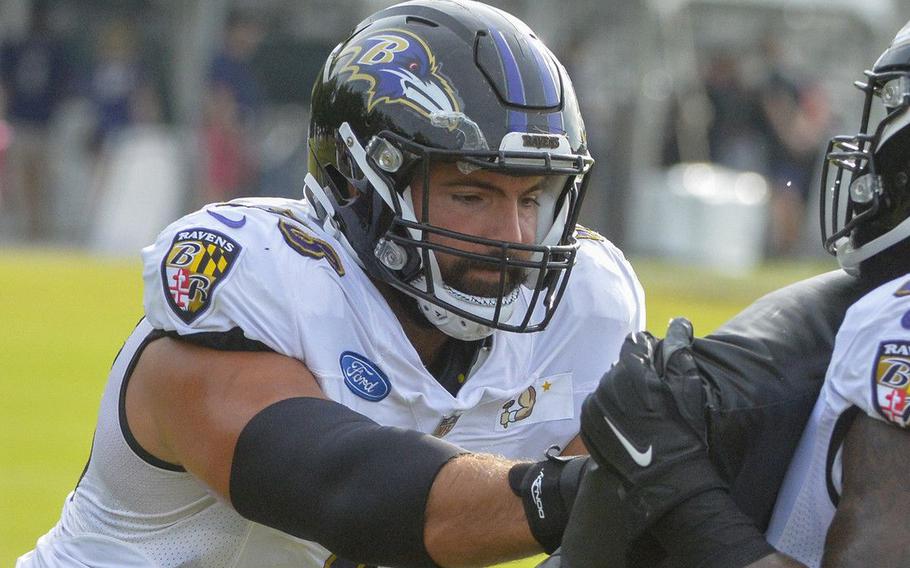 The Ravens franchise quarterback wanted Villanueva to know how much he appreciated his stout protection in the team's stunning 36-35 win over the Kansas City Chiefs. He knew the pressure the 33-year-old lineman had put on himself to improve from a poor Week 1 performance against the Las Vegas Raiders.

"It's not just myself learning about him, I hope a lot of people did," Jackson said a few days later. "He took the first game seriously. A lot of people doubted him [and] were saying all type of stuff about him. He moved from right tackle in the first game to left tackle to protect my blind side, and he aced it."

With former All-Pro left tackle Ronnie Stanley ailing, Villanueva's performance has become essential to the Ravens' prospects on offense. In training camp, the question was how he would adjust to playing on the right side after six years as the Pittsburgh Steelers' starting left tackle. Now that Villanueva is temporarily back at his more familiar spot, he's often Jackson's last line of defense against the scariest pass rushers in the world. Against the Chiefs, that meant stonewalling Pro Bowl defensive lineman Chris Jones, who did not produce a pressure or solo tackle the whole night. Villanueva ended up as Pro Football Focus' highest graded Raven for the game.

Just don't expect him to speak effusively about the experience. Villanueva does not see his job as a joyous one. In a quote NBC displayed during its Ravens-Chiefs broadcast, he compared playing tackle with jumping out of an airplane when he was a captain in the Army Rangers: "There is very little upside. The best thing that can happen when you jump is you survive."

Not the rah-rah stuff you expect from a typical NFL interview, but Villanueva expounded on his meaning Thursday.

"I think offensive linemen are very dark people," he said. "I think it's a position where, when you close your eyes before a play, all sorts of bad things are happening, and you're hoping they don't. Because a lot of things are outside of your control."

Not many players can reflect on three tours in Afghanistan to contextualize their experiences. So perhaps it's not surprising that Villanueva, whom coaches and teammates call "Al," described the dread in his current job without seeming too stirred up. 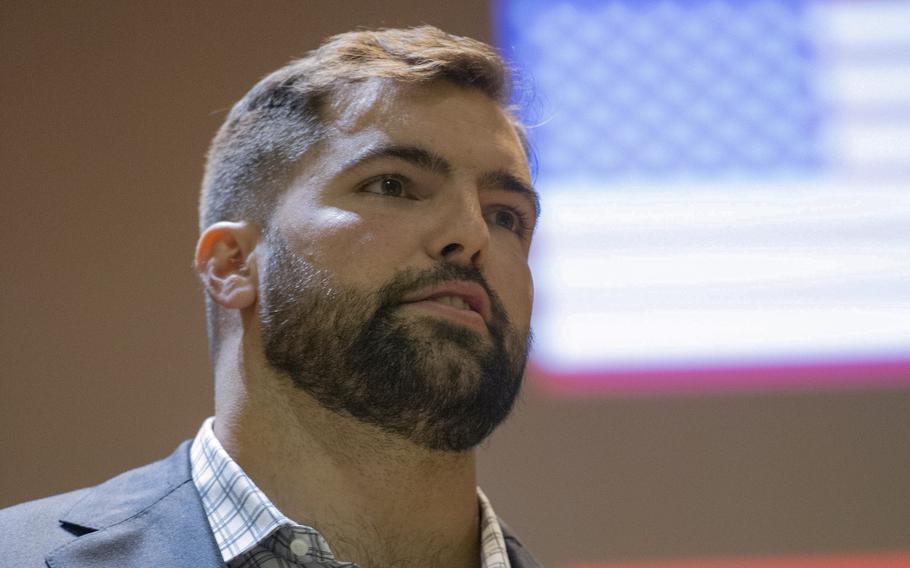 Villanueva, who made the Pro Bowl for the Steelers in 2017 and 2018, said he does not have a ritual for putting a disappointing game behind him.

"I try to approach every day the same," he said. "I try to get better at my craft. I try to understand the game plan, find a routine. … You rely on the people in the building that are going to support you, coaches and players. Try to do your best with the next snap. It's the only thing that matters is always the next snap."

It's the kind of answer a coach would give in a league that's always fixated on next Sunday. Perhaps that's why Ravens coach John Harbaugh expressed no concern about Villanueva's trajectory after he struggled to block Raiders pass rusher Maxx Crosby in the opener.

His performance, along with new concerns about the condition of Stanley's surgically repaired ankle, became a major subplot in the wake of the overtime defeat. Villanueva seemed to take the criticism in stride, much as he had the speculation about how he would handle a new position.

NFL analysts have paid greater attention in recent seasons to the complexities a lineman faces when he flips sides. NBC analyst Cris Collinsworth compared it to a right-handed pitcher suddenly deciding to throw left-handed in a major league game. It was an issue for several teams this offseason, including the Ravens' Week 3 opponent, the Detroit Lions. Penei Sewell, the No. 7 overall pick in the 2021 draft, struggled at right tackle after he starred primarily on the left side at Oregon. Though Sewell has graded well in his first two games, according to Pro Football Focus — and, like Villanueva, has returned to the left side after an injury to starter Taylor Decker — he has also said the transition was "not that easy."

Villanueva acknowledged the difficulty in training camp. "It's definitely difficult for the motor system to adjust, but you keep following the same principles that you followed to play left tackle," he said.

He was not, however, ready to attribute his improvement from Week 1 to Week 2 to his switch back to the left side.

"I think the sample size is very small," he said.

"Obviously, he's played [left tackle] a lot longer, so is he more natural? At this point, yes," Ravens offensive coordinator Greg Roman said. "But I just think he's getting more comfortable with what we're doing. … I think he just looked at that first game and said, 'That's not going to happen again.'"

One aspect of Villanueva's game that has surprised Ravens coaches is the fury he brings to run blocking. On the Ravens' game-clinching fourth-down conversion against the Chiefs, for example, he continued pushing Jones away from the play even after Jackson had picked up the necessary yards.

"I think he's still blocking him off-screen as this play ends," former NFL guard Geoff Schwartz said appreciatively as he broke down the play in an online video.

"I wasn't quite sure how that would look," Roman said of Villanueva's run blocking. "You don't get a true look at it in training camp. … I'm really liking what I'm seeing there. It's a little better than I thought it was going to be."

Jackson pointed to Villanueva and the rest of the offensive line as the primary force behind the Ravens' continued success as the league's top ground attack, despite the losses of running backs J.K. Dobbins and Gus Edwards to season-ending knee injuries. The superstar quarterback has become a loud cheerleader for his stoic protector, who refers to Jackson as "a very good kid."

In fitting with his unruffled demeanor, Villanueva did not want to overreact to the festive atmosphere at the end of the Chiefs game. "This team feels very close," he allowed. "Very college-like."

A few minutes later, the adult in the room stopped talking and went back to work.