DeWine salutes veterans at Ohio Military Hall of Fame for Valor induction: ‘They risk everything for our freedom’ 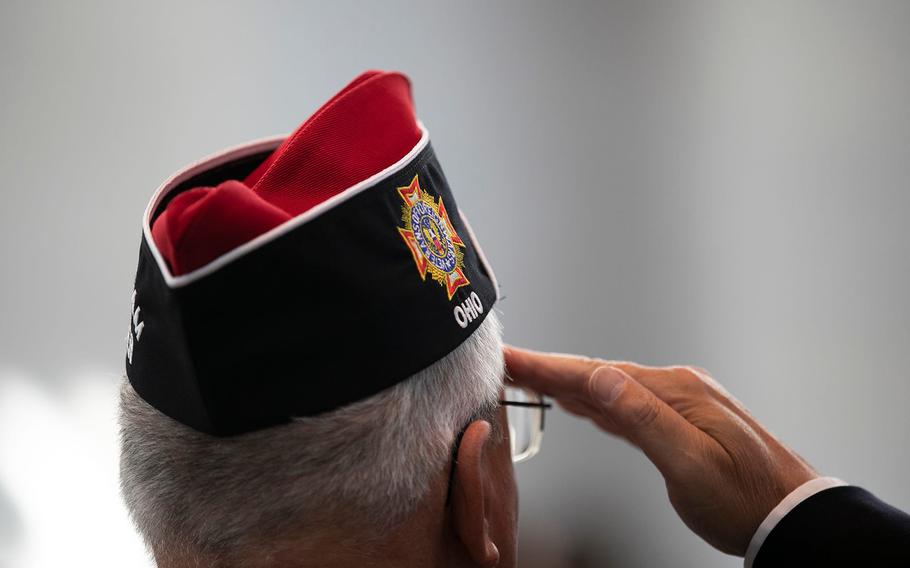 Bill Tate of Westerville salutes the flag Friday at the induction ceremony for the Ohio Military Hall of Fame for Valor class of 2021. (Courtney Hergesheimer, The Columbus Dispatch/TNS)

COLUMBUS, Ohio (Tribune News Service) — The crowd stayed silent as the harrowing stories of heroism were read from the stage.

A wounded soldier crawling through Vietnam jungles to get to injured brothers, a Marine diving on a grenade and sacrificing himself to save comrades, a staff sergeant from the legendary Night Stalkers commando team who lost his life when the enemy shot down the team’s helicopter over the mountains of Afghanistan.

Other men being honored fought firefights in Vietnam rice paddies, manned the guns from the doors of helicopters, and undertook dangerous missions to rescue downed pilots. All were among 15 veterans inducted into the Ohio Military Hall of Fame for Valor during a ceremony at the Ohio Statehouse atrium Friday.

Founded more than 20 years ago, the hall of fame with this year’s class now includes 437 veterans who were each awarded medals of valor for specific acts of bravery and heroism in combat. 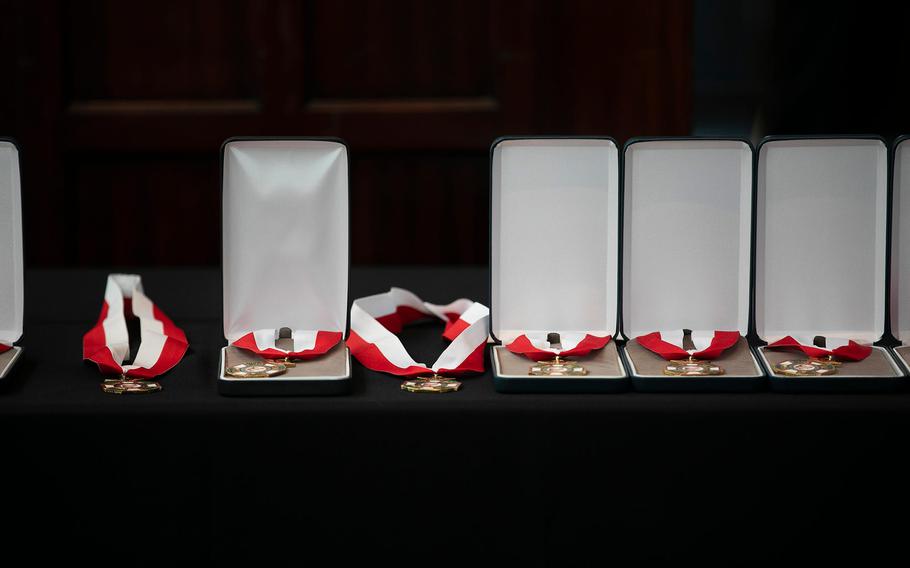 Medals wait for their recipients Friday at the induction ceremony for the Ohio Military Hall of Fame for Valor class of 2021. (Courtney Hergesheimer, The Columbus Dispatch/TNS)

Upper Arlington resident Steve Stover, 74, accepted the hall of fame medal on behalf of his late father, Army 1st Lt. W. Wallace Stover, but he said it never gets any easier to listen to the recounting of what his dad went through on the day he earned his Silver Star in a raging battle on the Solomon Islands during World War II. Last of the legends: Ohio’s last Buffalo Soldier, John B. Williams, dies at 98

It was on Nov. 29, 1943, that his father, as part of the 129th Infantry Regiment, saved a patrol unit pinned down by fire. Stover braved heavy machine gun fire and sniper rifles as he crawled up a shallow gully, leapt onto a ledge and jumped into a cave to save the wounded and trapped soldiers inside.

The hall of fame ceremony each year attracts hundreds of people to a standing-room-only crowd at the Statehouse. As the pandemic continues, Friday’s was a much smaller crowd of probably less than 200.

Master of ceremonies Rick Colliver reminded them that the combat stories are real.

“This is not a script some Hollywood filmmaker dreamed up,” he said. “These are stories of real heroes.” Robert "Bob" Labadie, who was awarded a Silver Star while a second lieutenant in the U.S. Army serving in Vietnam in 1969, was inducted into the Ohio Military Hall of Fame for Valor. (TNS)

Among the honorees this year was Robert “Bob” Labadie, an Army veteran who served 30 years both active duty and with the Ohio National Guard.

A former director of the Ohio Department of Veterans Services who retired as a colonel, he was just a young second lieutenant serving with the 22nd Infantry in December 1969 when his platoon was pinned down by fire in Vietnam. He gave up his own cover to engage the enemy, saving soldiers’ lives. He was awarded the Silver Star.

Friday’s induction certainly was an honor, said the 72-year-old Westerville man (or maybe 73, he said he’s never been certain). But it also forced him to remember, as he dug through long-put-away old photos from his years in the service while getting ready for the ceremony.

“It started me reminiscing,” Labadie said. “And I guess that’s good. I was a 19- or 20-year-old second lieutenant in the controlled chaos of war. I’ve tried to suppress it or forget it. But I’m glad I was able to help the folks I served with.” 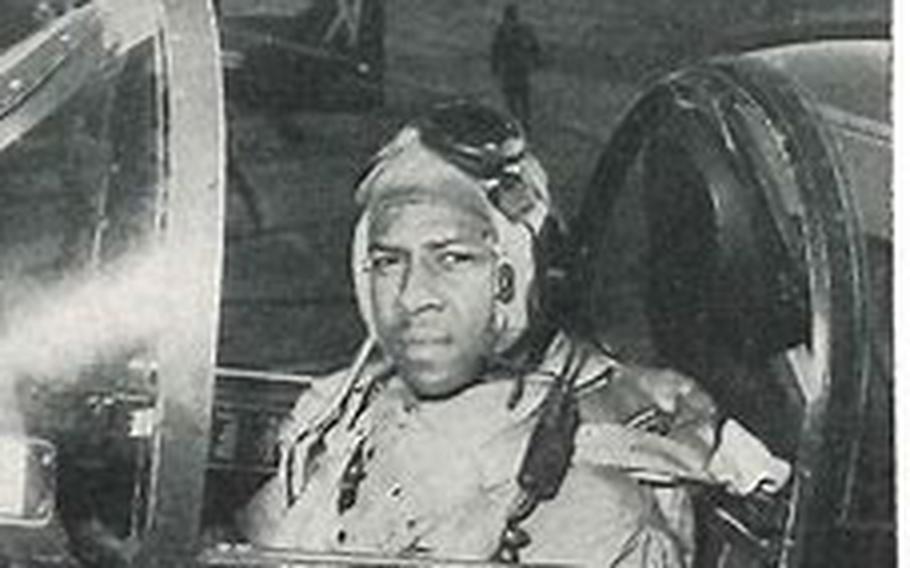 Some of the veterans, like Stover, were inducted posthumously. Those with ties to Greater Columbus were World War II Army veteran William J. Craine, who entered the service from Columbus and was awarded a Bronze Star while a sergeant in 1945; and Navy pilot Jesse L. Brown, an Ohio State University student who accepted a commission as an ensign, went on to become the first Black Naval pilot and was awarded the Distinguished Flying Cross.

Brown’s citation for the medal describes the nearly 20 combat missions he flew over about eight weeks after arriving with his fight squadron off the coast of Korea. On Dec. 4, 1950, he provided air support to ground Marines who were outnumbered and worn down from brutal weather conditions in a grueling, long and bloody battle at the Chosin Reservoir.

“With his plane apparently struck by gunfire and losing fuel pressure, Brown crash-landed in enemy territory on a snow-covered mountainside west of the lake. Although Brown survived the impact, he was pinned in his smoldering plane...” and it was there that he died, despite heroic rescue efforts, the citation states.

Gov. Mike DeWine helped present the hall of fame medals, and he said Ohio and the nation owes each recipient and all of those who do or have served a debt of gratitude.

“Today, Ohio salutes them for their service, which went above and beyond the call of duty,” DeWine said. “We owe each of them so much. They risk everything for our freedom. The blessings that we sometimes take for granted do not come without a cost.” The Ohio Air National Guard, presents the colors at the induction ceremony for the Ohio Military Hall of Fame for Valor class of 2021, Friday, September 24, 2021. (Courtney Hergesheimer, The Columbus Dispatch/TNS)

Hall of fame inductees include veterans from counties such as Lucas, Medina, Knox and Summit.

Others inducted in the 2021 class were: ►Everett Dennis Keaton, born in Waverly, who was an Army captain serving in Vietnam and who was awarded the Silver Star while a captain in 1970. (Posthumously honored)

►Shamus O. Goare, who was from Danville in Knox County and, as an Army staff sergeant and member of the Night Stalkers, earned the Air Medal with valor during Operation Enduring Freedom in 2005. (Posthumously honored)

►Kurt B. Barger, who as an Army sergeant first class serving in Operation Enduring Freedom in Afghanistan was awarded the Bronze Star with valor in 2013. He entered service from Cuyahoga County and lives now in Wadsworth in Medina County.

►James Douglas Locker, a sergeant in the Air Force who was killed in Vietnam in 1968 and received his third Silver Star posthumously. His remains were returned to the U.S. in 2003, and he is buried in Sidney in western Ohio.

►John J. Keefe, an Army specialist from Tiffin in Northern Ohio who was awarded a Bronze Star with valor in 1968 while serving in the Vietnam War. (Posthumously honored)

►Adam D. Zimmerman, from Sylvania in Lucas County, who was an Army specialist when he was awarded the Army Commendation Medal with valor during Operation Iraqi Freedom.

►Stanley M. Barefield, a Marine who was a private first class when he served in Vietnam and was awarded the Navy Commendation Medal with valor in 1969. He entered service from Columbiana County in Northeast Ohio.

►Medal of Honor recipient Pfc. Harold G. Epperson, a Marine who was awarded the military’s highest honor for valor for action on Saipan against Japanese forces on June 25, 1944. Epperson was born in Akron.

More information on all members of the Ohio Military Hall of Fame for Valor can be found at ohioheroes.org.