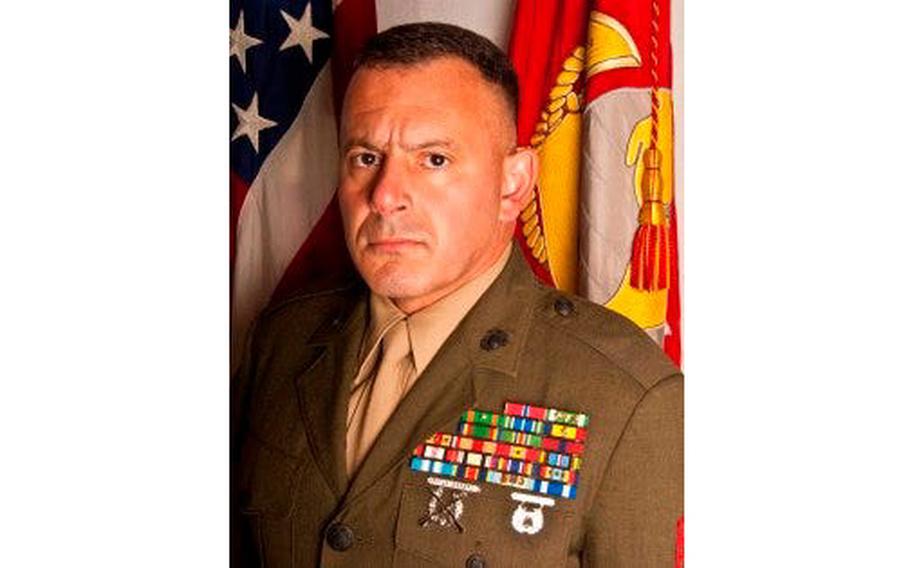 COLUMBUS, Ohio (Tribune News Service) — When one of his Marines hit a milestone — got married, became a parent, took a new job, bought a house — retired Sgt. Maj. Dan Altieri generally was the first to reach out.

And he would speak to them the words that meant the most.

"He would say 'Hey, I'm proud of you, man,' and you wanted to hear him say that," said Sgt. Jason Dominguez, a 41-year-old from Columbus' Northwest Side who served with Altieri and deployed under his leadership in 2005 with the Columbus-based Lima Company, a reserve unit that suffered the historic loss of 22 Marines and a Navy corpsman during its time in Iraq that year.

"He embodied semper fidelis, always faithful. We were like his sons, his children," Dominguez said. "He always put each of his Marines above himself."

Now, those same Marines find themselves reeling from the unexpected news that the 62-year-old Altieri died in his sleep Monday night of what his friends say was an apparent heart attack at his home in Kure Beach, North Carolina. He had retired there after 30 years of active-duty and reserve Marines service, ending his career as the regimental sergeant major for the 25th Regiment.

Following a service in North Carolina, his friends say a military funeral is being planned for sometime next week in Northeast Ohio.

A North Canton native from Northeast Ohio, Altieri also was retired from the Stark County sheriff's office in Canton, where he had spent more than 25 years as a deputy.

Lima Company is part of the 3rd Battalion, 25th Regiment, 4th Marine Division headquartered in Brook Park, near Cleveland. It was in 2001 that Altieri was named company first sergeant (its highest ranking enlisted position) for Lima Company, which operates out of the Navy and Marine Corps Reserve Center at Rickenbacker Air National Guard Base in Columbus.

A decorated combat veteran, his more than 10 overseas deployments included Grenada, Lebanon, the Gulf War, and a tour of duty to Afghanistan in 2010, which was also with Lima Company. His uniform bore too many ribbons and medals to easily count, and while his bravery and heroics in combat were legendary, it was his care and compassion as both a leader and a human that set him apart, those who served with him say.

When about 160 Marines from Lima Company deployed to Haditha in the Anbar province of Iraq in 2005, they knew it was some of the most lawless and dangerous territory in that country. The losses mounted quickly from May through July. Then came Aug. 3. That's when a buried land mine exploded under an amphibious assault vehicle in a convoy, killing 11 Marines who were from Lima Company's 12-man, 1st Squad of the 3rd Platoon.

No other company had suffered greater losses in the war at that time, and it seemed the whole of the United States rallied around Lima Company as it found itself suddenly the public face of the realities of war. And it was up to the commanding officer and Altieri, as the highest ranking enlisted man, to carry the men through.

When the company returned to Columbus in October of that year, one in three of the Marines who deployed had been killed or wounded. Master Sgt. Steve Hooper said that having a leader like Altieri to help them deal with all that had happened was immeasurable.

"It was amazing to have someone like him to turn to. He truly cared for every one of us," said the 43-year-old Hooper, who lives in Ashville in Pickaway County and is in his 21st year with the Marines. "His Marines tell everyone that they would follow Sgt. Major Altieri through to the gates of hell. And they would. No doubt about it."

And Altieri continued that support even through a pandemic. Earlier this year, he helped to organize a retreat for Marines he served with. A group met in Nashville for a weekend of fun, fellowship and to talk about scars and memories that only other combat veterans could ever understand.

Dominguez and Hooper were there.

"The impact he had on this world is so evident," Dominguez said, pausing to collect himself. "When I learned the news that he was gone, someone might as well have told me that my own father just passed away. He was like a dad to all of us."

And those feelings aren't held by just the Marines who served under Altieri, but also by those who commanded him.

Retired Lt. Col. Tom Foos was friends with Altieri for more than 20 years and was the commanding officer of Lima Company when Altieri became first sergeant. (Foos was promoted and received another assignment just before the unit deployed to Iraq.)

He said when Lima Company returned to Columbus in 2005, Altieri spent the night at the Foos' Westerville home. They stayed up all night, draining a couple bottles of wine as the ghosts of battle lingered in the air.

"He loved every Marine in that company. I know he took those losses personally," Foos said. "He was the glue of Lima Company. He was an unselfish man and an unselfish leader who they could count on for the rest of their lives."

But Altieri, of course, was more than a Marine. A rabid Cleveland Browns fan with a booming voice and gregarious personality, he also was a committed family man. His survivors include his wife, Kovette, two grown sons and a sister. He was devoted to them all, said his cousin Trudy Altieri-Yacko of Canton.

"For him, it was family first," Altieri-Yacko said. "In his own family and in his Marine family, Dan saw the good in everyone. He made you want to be a better person."