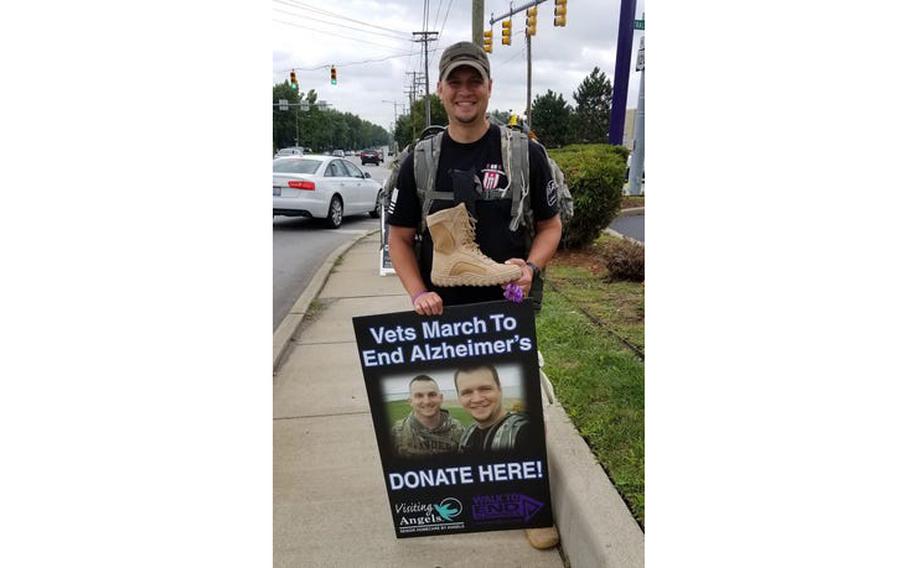 Tim Welbaum, an Army veteran who owns Visiting Angels Senior Homecare Agency in Adrian, Mich., and has PTSD, is the leader of the veteran marching group. (Tim Welbaum)

ADRIAN, Mich. (Tribune News Service) —  A group of veterans from the area are getting together once again, Friday, Sept. 24, to march to raise money for the Alzheimer’s Association.

The group did the march carrying military ruck sacks weighing sometimes more than 40 pounds in 2018 and 2019. Last year, they did not have the event due to COVID-19, so this year they have a goal of raising $100,000.

— One in three seniors will develop and die with Alzheimer’s disease or some form of dementia.

— More than 6 million Americans are living with Alzheimer’s, and by 2050, this number is projected to rise to nearly 14 million.

— Every 65 seconds, someone in the U.S. develops the disease.

— Veterans with post-traumatic stress disorder or traumatic brain injury are two to four times more likely to develop Alzheimer’s or other forms of dementia.

Tim Welbaum, an Army veteran who owns Visiting Angels Senior Homecare Agency in Adrian and has PTSD, is the leader of the veteran marching group.

Welbaum said he does not want his children to have to face the difficulties that come along with caring for a parent or loved one with Alzheimer’s or other forms of dementia.

“They call this a family disease because everybody has to be involved. Everyone has to care for that individual. Everyone ends up being impacted by it,” Welbaum said. “The more that I’ve seen being the owner of a home care company, due to many of my clients coming to us for Alzheimer’s or different forms of dementia, I now worry about my family, my kids. I don’t want my kids having to go through that with Mom and Dad. There’s nothing that scares me more as Alzheimer’s and dementia as we get older.”

The Vets March to End Alzheimer’s Campaign is an annual 34.5-mile military style “ruck march” that Scott Doney, Welbaum’s office manager at Visiting Angels, and Welbaum have conducted under the Alzheimer’s Association’s Walk to End Alzheimer’s” major fundraising event, with 2021 being the third vets’ march event.

“Unfortunately, 2020 brought challenges due to COVID, and we did not fundraise or conduct our march in 2020. So that’s why this year will be our biggest, most successful march yet,” Welbaum said. “Our goal, which I hope to crush, is set for 2021 at $100,000. I’m definitely going to need some assistance with accomplishing it.”

Since being introduced to the Alzheimer’s Association, Welbaum has spoken to business leaders and legislators at the state and federal levels and has been invited to state and national capitol buildings to educate leaders.

“I’ve been a very outspoken and influential member of our local and state communities. I’ve even been a guest speaker at our state and national level summit conferences for the Alzheimer’s Association. People are taking notice of the seriousness of this disease, and they’re also seeing that it is even more scary for our veteran population who have PTSD or traumatic brain injuries,” Welbaum said.

His Visiting Angels agency provides personal care, light housekeeping, transportation, meal prep, companionship and many other services to help seniors remain living at home safely, while helping them regain their independence so they do not have to move into an assisted living or nursing home facility.

The marchers will start at 2:30 a.m. at the Alzheimer’s Association office in Ann Arbor, head past Michigan Stadium, then head southwest, arriving at Visiting Angels, 3300 N. Adrian Highway, at about 4 p.m.

There will then be a homecoming party to celebrate accomplishing this feat and to raise more money. There will be a food truck, doughnuts, cider, ice cream and a bounce house. Welbaum is also hoping to have a fire truck and police car for kids to see. Radio station Q-95 is hosting the homecoming from 4 to 7 p.m.

Welbaum urges anyone who can spend a $1, $5, $100 — whatever they can afford — to open their wallets and purses and visit act.alz.org/goto/TimTheVet to donate or show up between 4 and 7 p.m. Friday at the parking lot of Visiting Angels Friday to make their donations there and celebrate with the group.