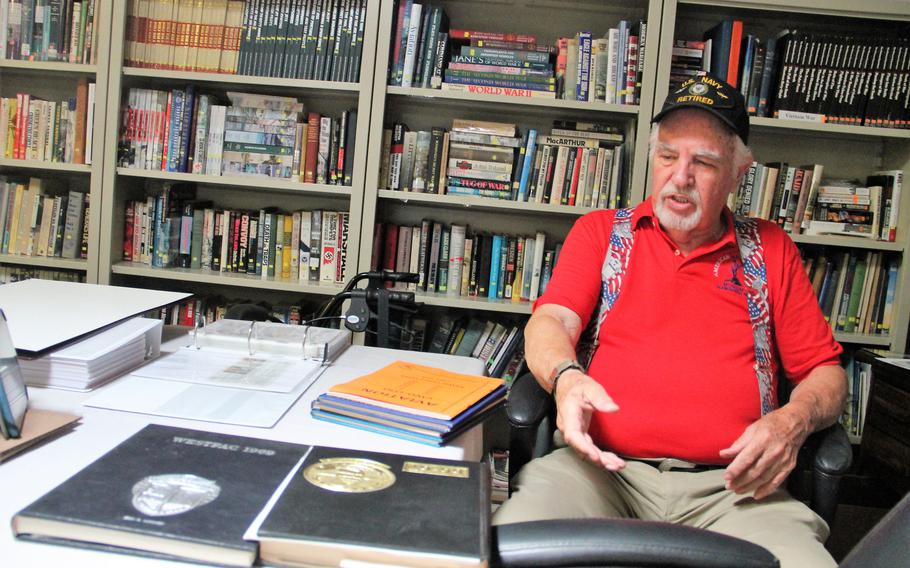 Vietnam Veteran Jerry Mooney talks about his cruise books and how they "represent my life in Vietnam from 1966 through 1975 with the exception of 1970-1973 when I was back in the U.S." Mooney was stationed at Kirtland Air Force Base from 1970-1973. (Nicole Maxwell, Alamogordo Daily/TNS)

Mooney was stationed in Vietnam between 1966 and 1975. In 1965, he was assigned to the Airborne Early Warning Squadron on the west coast of Vietnam. The Squadron operated out of what is now Tan Son Nhat International Airport.

"I was an E-6. I had been in training command as an instructor for three years or so," Mooney said. "I was assigned a small detachment with four aircraft and we were initially assigned to the USS Hornet. We had the honor and pleasure of recovering the first Apollo (unmanned) spaceship."

In 1966, Mooney was re-assigned to the USS Bon Homme Richard, where he was named chief petty officer.

Some of the equipment Mooney and his detachment used back then were radar, Sony tape recorders and "as many radios as I could cram into an airplane so we could stay in constant communication with more than one airplane," Mooney said.

This detachment was the first to launch and the last to recover airplanes on the aircraft carrier. Mooney and the detachment were stationed at Yankee Station off the Pacific Ocean off the coast of North Vietnam and north of the Vietnamese demilitarization zone, or DMZ. The DMZ was a strip of land separating North Vietnam from South Vietnam. It was considered to be demilitarized, Mooney said.

The USS Bon Homme Richard had a record for shooting down and destroying more MiG aircraft during its six- or seven-month deployment than all the MiG aircraft that had been destroyed prior to Mooney's detachment's deployment there, Mooney said.

"We essentially ended the air war in North Vietnam," Mooney said. "We did it with F-8 Crusaders, A-7 (Corsairs) and predominately (Douglas) A-4 (Skyhawks).

"Our ships came in to port and our families were there but as we sailed into San Francisco as we passed under the Golden Gate Bridge, there were people on the bridge who were throwing buckets of blood on the flight deck," Mooney said.

Mooney said his return home was difficult. In 1969, he moved to Florida to go to school. The next year Mooney was stationed at Kirtland Air Force Base where he considered taking courses at the University of New Mexico.

"I was told I couldn't wear my uniform on campus," Mooney said. "The Vietnam veteran was not honored."

Mooney, like many other, sought help to reintegrate into U.S. society with the help of organizations such as Veterans of Foreign Wars (VFW) or the American Legion.

"I went to a couple of meetings of the VFW and other than seeing guys sit around a bar and drink, I have nothing against drinking, I drank then, but I thought, this isn't the answer, I'm not getting my answers I need here," Mooney said.

"He became a good friend," Mooney said. "We never met officially because there was a stigma that gets attached to a military record if you have to talk to a psychiatrist. They say it isn't there. John did something that was really great: he made it informal."

Mooney said he and three others — all prisoners of war — formed a therapy group.

"He talked to us about experiences and he let us talk about our experiences without being judgmental," Mooney said. "While we all had different levels of experience, we could all relate to each other and it wasn't sympathy, but we empathized with each other."

He said that empathy should be extended to veterans of all wars including those who served in Afghanistan. Mooney said he sees "similarities" between veterans of the Vietnam War and veterans who served in the Middle East.

"The veterans that came back from Vietnam were ignored, criticized and quite often just poorly treated by not only the (U.S. Veterans Administration), but they were poorly treated by their neighbors," Mooney said. "The ones who were wounded, had limbs blown off and things like that. They wanted them hid. They didn't even want to see 'em."

Resources are available for veterans through the Air Force Wounded Warrior Program at Holloman Air Force Base.

Michelle Colburn is the Recovery Care Coordinator for the Air Force Wounded Warrior Program where she helps facilitate, monitor and ensure access to care and resources for seriously or very seriously wounded, ill and inured Airmen and their families or caregivers.

"My goal is to ensure that those servicemembers and their families have support and resources they need to be prepared for the future," Colburn said.

To qualify for the Air Force Wounded Warrior Program you must be:

— Very seriously, or seriously wounded, ill, or injured on the Casualty Morning Report or by a Department of Defense medical authority.

— Airmen with highly complex medical conditions that are service related or were sustained in the line of duty and confirmed by a DOD medical authority (examples: tick-borne illnesses, cancer, invisible wounds [PTSD/TBI], chemical exposure, etc.). Final approval authority is AFPC/DPFW.

— Airmen diagnosed with service-related or in the line of duty PTSD, TBI, or MST, verified by DOD medical authority and are under consideration or referral for MEB.

— Air Reserve Components (ARC) who were retained for more than 6 months on Title 10 medical orders or returned to Title 10 orders for deployment-related conditions.