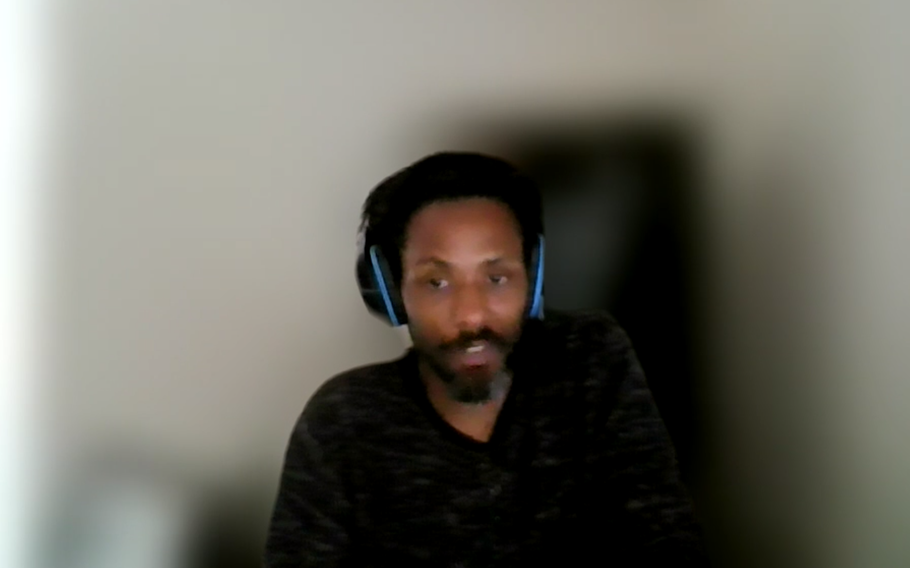 Martin Johnson, a former airman, participates in a virtually news conference Monday, Sept. 13, 2021. Johnson is a plaintiff in a lawsuit that claims the Air Force incorrectly discharged veterans struggling with mental health conditions and rejected their appeals for discharge upgrades. (Screenshot captured from news conference)

WASHINGTON — Two veterans filed a class-action lawsuit Monday against the Air Force, claiming the service branch discriminated against service members with mental health conditions by kicking them out with other-than-honorable discharges.

Those discharges, also known as “bad paper,” carry a stigma and prevent veterans from receiving many government benefits, such as Department of Veterans Affairs home loans, health care and education benefits.

The Pentagon established an Air Force Discharge Review Board to allow discharged airmen to appeal their discharge status, and the Defense Department instituted a policy in 2017 to give “liberal consideration” to veterans looking to upgrade their bad paper in situations where a service-related medical disorder could have led to their misconduct.

The lawsuit claims the Air Force Discharge Review Board ignored the policy and denied upgrades when they were warranted. The complaint, citing Air Force data, states that between January 2017 and December 2019 the board rejected 72% of veterans seeking upgrades because of their diagnoses of post-traumatic stress disorder, traumatic brain injury and other mental health conditions.

“I’ve tried going through established channels to get my discharge upgraded, but I’ve been let down by the Air Force,” said Martin Johnson, one of the plaintiffs in the lawsuit. “It feels like I have no other option than to bring this complaint today on behalf of myself and thousands of other veterans who have, like me, been unfairly denied discharge upgrades.”

Johnson said he deployed to Iraq in 2007 and returned to discover his wife was having an affair. He began suffering from mental health issues and received medical treatment for depression. After a string of minor infractions, such as not mowing his lawn in accordance with base housing guidelines, the Air Force discharged Johnson in 2009 with bad paper.

Since then, he’s been diagnosed with major depressive disorder, social anxiety disorder and PTSD. He sought a discharge upgrade with the help of an attorney but was denied by the Air Force Discharge Review Board in May.

“It’s been very hard,” Johnson said Monday during a news conference. “I’ve been walking around acting like everything is my fault.”

Johnson is being represented by the Yale Veterans Legal Services Clinic, which helps veterans with the legal process of securing government benefits. The clinic, which is made up of law students, settled a similar case against the Army in April. The court ordered the Army Discharge Review Board to reconsider thousands of cases going back to 2011 in which discharge upgrades were denied. The clinic is also arguing a case against the Navy Discharge Review Board.

Sen. Richard Blumenthal, D-Conn., who has advocated for veterans with other-than-honorable discharges, said Monday that following the settlement with the Army, the Air Force should institute the “liberal consideration” policy without the impetus of another lawsuit.

“I cannot express my sense of outrage, given that the Army has already changed its policy as a result of legal action,” Blumenthal said. “Simple decency, as well as respect for the law, require the Air Force to change its policy. The fact this legal action is necessary is shameful and disgraceful.”

Also involved in the lawsuit is an anonymous plaintiff who’s referred to in the complaint as Jane Doe.

Doe, who joined the Air Force in 2013, was raped by a fellow airman. She later entered into a relationship with another airman who verbally and physically abused her. During the same time, she received letters of reprimand for arriving late to duty and not filling out documentation correctly. She later failed a physical fitness test and was sent for a mental health evaluation. Doe was separated with an other-than-honorable discharge in 2016.

She sought relief from the Air Force Discharge Review Board in 2020, and her psychiatrist testified on her behalf. The board rejected her appeal.

In the lawsuit, the plaintiffs asked the court to order the Air Force to upgrade Johnson’s and Doe’s discharges and to review past requests for upgrades that have been denied.

“The Air Force forcibly separates countless veterans from the military with less-than-honorable discharges due to minor infractions, and refuses to acknowledge that their mental health or sexual trauma played a role in shaping their conduct,” the lawsuit states. “These veterans are forever stigmatized, rejected from jobs, and barred from benefits like education and health care due to their discharge status.”