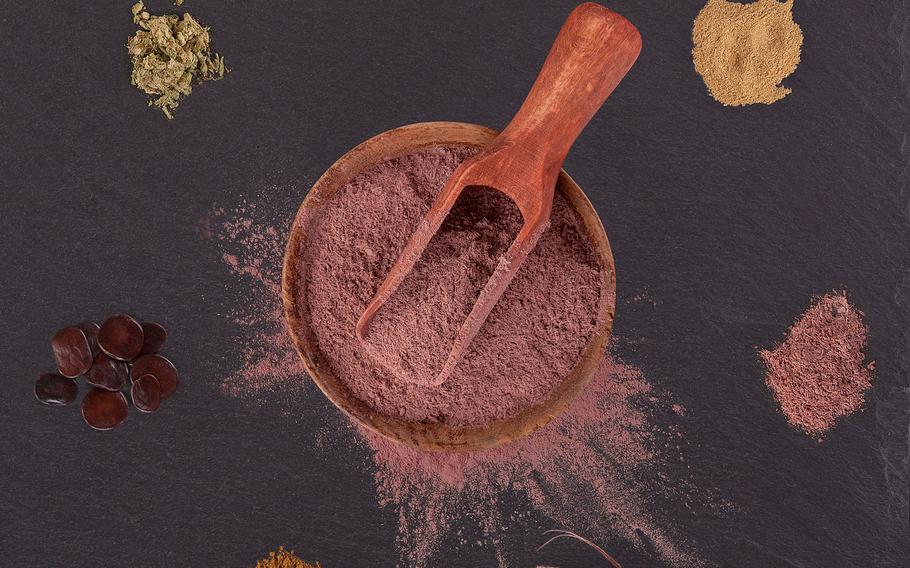 Capone suffered traumatic brain injuries as a specialist in setting explosive charges for U.S. Navy SEAL Team 6. After retiring in 2013, he suffered from depression, anger, debilitating headaches and violent dreams. Brain doctors and psychologists treated him with pills, which he mixed with alcohol. Neither worked.

Amber was at a breaking point. "I was just preparing myself for what my life would be like as a widow of suicide because I felt like it was inevitable," she said.

Then they discovered psychedelics.

The couple went to one of the treatment centers in Baja California that offer an underground therapy using ibogaine, a highly potent alkaloid traditionally extracted from the root of a plant native to Gabon in Africa. After the therapy, Marcus said he was able to let go of everything that had happened to him, including pain from his early childhood.

In its whole-plant form, the Tabernanthe iboga shrub has been used for centuries in religious ceremonies by the Bwiti people, who say the plant heals them and allows them to talk to God. Users describe their experience with the ibogaine extract as being in an intense waking dream. The plant and its effects have taken root among retired special operations combat veterans who may be suffering from blast related injuries or post-traumatic stress disorder.

But the drug is illegal in the U.S., and it poses cardiovascular health risks. Ibogaine may block channels in the heart's system, slowing down the heart rate, which can cause fatal arrhythmias.

A 2006 medical journal article noted that at least eight people have died from taking ibogaine. Experts say the true number is likely much higher because its use is unregulated.

"Of all the psychedelics, it's probably the one that carries the largest risk because of its arrhythmogenic (ability to cause arrhythmias) potential," said Dr. Ken Adolph, a cardiac anesthesiologist in Austin, Texas.

In 1970, the U.S. Food and Drug Administration grouped ibogaine together with LSD and psilocybin making them all schedule I substances — illegal drugs which have no medical application and are not safe for use even under medical supervision.

In Mexico, ibogaine use falls into a gray zone — not exactly legal, and not exactly regulated, either.

State health authorities say people can obtain licenses to use it, but it remains unclear whether they can administer it to others or what qualifications they would need to give it to someone else. There are no clinics licensed to provide medical treatments with ibogaine, according to Marco Gámez, the director of the Comisión Estatal de Protección contra Riesgos Sanitarios, or COEPRIS , a state health agency.

Very little data exist about ibogaine's effectiveness as a treatment of trauma-related psychological issues and cognitive impairment. Because the drug is illegal in the U.S., it can't be administered to study its effects.

One peer-reviewed study, in the Journal of Chronic Stress, found that the psychedelic-assisted therapy holds "unique promise." In looking at 51 military veterans who had gone to Mexico for a psychedelic clinical program between 2017 and 2019, the study found large reductions in their suicidal ideation, cognitive impairment, symptoms of post-traumatic stress disorder, depression and anxiety.

Ibogaine is currently undergoing clinical trials abroad for its viability as a treatment for addiction, which can often occur simultaneously with traumatic brain injuries and PTSD.

A 2018 study from New Zealand interviewed 11 people a year after undergoing a single ibogaine treatment and found eight of them had cut back or stopped using opioids. One of them died.

Another 2017 peer-reviewed study published in the Journal of Psychedelic Studies surveyed 88 patients, who were mostly daily opioid users, who received ibogaine treatment in Mexico between 2012 and 2015. Fifty percent reported that ibogaine reduced opioid craving and 30% of participants reporting never using opioids again.

Critics point out that of that 30%, only half were interviewed a year or more after their treatment, that the data was self-reported, and that the clinic was calling its own former patients.

Dr. Dan Engle, the founder and medical director of Austin's new Kuya Institute for Transformational Medicine, and author of "The Concussion Repair Manual: A Practical Guide to Recovering from Traumatic Brain Injuries," said more research is needed on ibogaine.

The success rate of traditional U.S. drug rehabs hovers around 10 to 20%, he pointed out. He said when the proper support systems are set-up after a ibogaine treatment, the success rate for addiction recovery he has witnessed is between 60 to 70%.

"The standard of care hasn't changed in the last five years," Engle wrote in an email. "Those numbers 10 to 20 percent are more accurate for the standard of care when aftercare and recovery coaching are not successfully engaged" after traditional rehabs.

Alternative medicine and psychedelics have a long history in Mexico. If you've got an ailment, there's probably a Mexican tea or herb for it.

Mushrooms were considered sacred in the mountainous region of the Sierra Mazatec in the northern part of the state of Oaxaca. A Mazatec curandera (medicine woman), María Sabina, introduced "magic mushrooms" to a vice president for J.P. Morgan in 1955, prompting U.S. tourists by the thousands to make long, strange trips to Oaxaca.

Many of the estimated 1 million Americans who cross each year into Mexico for medical treatment are looking for lower-cost options. But some are seeking treatments they wouldn't be able to get in the United States.

Homeopathic shops offering herbs and botanicals are everywhere in Tijuana. Gámez, the head of the state health agency, cautioned tourists to investigate any homeopathic procedure they may undergo to make sure it is authorized by Baja California.

José Inzunza, the director of Nouvelle Vie Holistic & Wellness Center in Tijuana, says he's not interested in ibogaine treatment becoming part of that medical tourism boom, but rather in helping people who really need the treatment.

"We don't want to create Mexico as a tourist destination for ibogaine where people think 'Go and have fun with ibogaine,' because you're not going to have fun," Inzunza said.

He said proper screening procedures have helped prevent any deaths because of ibogaine in Baja California for 12 years, but he stressed the treatment cannot be given to everyone because those stringent screening guidelines must be followed.

In Baja California, ibogaine patients typically pay around $5,000 to stay in a large, rented villa or house that has been converted into a clinic. Depending on what the person is being treated for, those stays can range from four days to a few weeks.

Some clinics are more like spas with saunas, massage rooms and other amenities, whereas others incorporate a more traditional Bwiti ritual into the experience.

Inzunza and others stressed the importance of clinics having proper medical equipment, including EKG's and other equipment to monitor the patient's heart rate and vitals during their trip.

At first, Marcus Capone was reluctant. He had never taken drugs, especially psychedelics.

"He was like 'Uh-uh. No way. That's weird. That's crazy. I'm not doing drugs. I'm not going to Mexico,'" Amber recalled.

But then, Amber convinced him, she says by approaching him with compassion and telling him she wouldn't stop fighting for his life.

He said it worked.

"Think of it as the individual is carrying around a backpack of 1,000 pounds of bricks. And it's just heavy; it's weighing on you. You have trouble walking and doing simple tasks because of that weight that is on your back and on your shoulders," Marcus said.

"As you go through your ibogaine experience, you just take those rocks out one at a time, and by the end, you have an empty bag. You feel like all the weight has been lifted," he said.

The couple has since become big proponents of ibogaine treatment, starting a nonprofit called VETS that funds ibogaine research at Stanford and helped with the initial study in the Journal of Chronic Stress. They send other struggling combat veterans abroad for psychedelic therapies illegal in the United States and lobby for legal therapeutic use of psychedelics.

Bobby Laughlin, 32, who owns a private equity firm in Los Angeles, described his ibogaine experience as undergoing years of intense therapy in just a few hours.

At the time, Laughlin was a 23-year-old daily intravenous heroin user. Five rehabs in the U.S. were not completely useless, he said, but he was still addicted to heroin until he tried ibogaine.

"I felt a very intense, real feeling of free falling ... It felt like a gigantic hand reached up through the earth and grabbed my entire body and just pulled me down ... and I could feel myself going through the mattress and through the concrete violently," said Laughlin about his experience.

During his hallucination, Laughlin said he saw demons and dragons yelling at him about the choices he'd made. He was finally able to break his spirit free from this underground hell, as part of the soundtrack of the movie "Mortal Kombat" played in his head. When he came out, Laughlin said he felt a love, acceptance and a self-compassion for himself he had never felt before.

Laughlin says he has been sober since his treatment in 2013 and has remained involved in the recovery community.

Inzunza and Laughlin both said there isn't much concern about people becoming addicted to the ibogaine because the experience is "brutal" — not something anyone would do for recreation.

There's growing pushback against the U.S. ban on psychedelics. Last year, Oregon became the first state to legalize the therapeutic use of psilocybin, the psychedelic ingredient in magic mushrooms. Denver, Oakland and Washington, D.C., have decriminalized it.

Last month, the California state Legislature sidelined a similar bill that would have removed criminal penalties for the possession, use and cultivation of certain psychedelics.

In June, Texas and Connecticut enacted laws allowing research into how psilocybin might help people with post-traumatic stress disorder. Meanwhile, investment money is pouring into the hallucinogens market.

But ibogaine, considered one of the most powerful psychedelics on the planet, isn't likely to be at the front of the line for legalization.