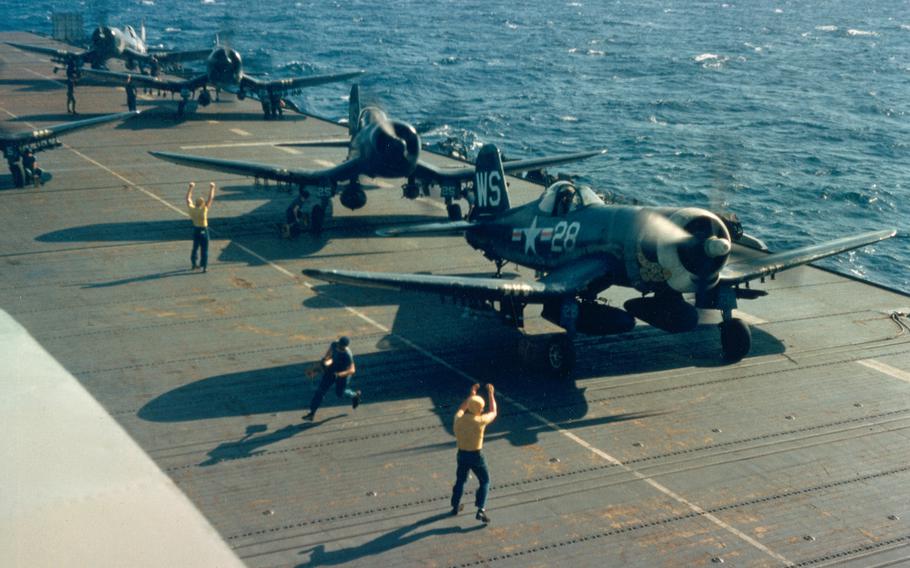 U.S. Marine Corps Vought F4U-4 Corsairs of Marine Fighter Squadron VMF-323 armed with bombs, napalm tanks and HVAR rockets are launched for a mission from the flight deck of the escort carrier USS Sicily (CVE-118) off Korea, in 1951. Note the rattlesnakes painted on some aircraft, due to the squadron’s nickname “Death Rattlers.” (U.S. Navy/Wikimedia Commons)

Foust served as a fighter pilot in the U.S. Marine Corps and fought in the Pacific theater in World War II. He flew close air support during the Korean War, winning the Silver Star for valor in combat.

Foust finished his flying career at the Naval Air Station in Alameda flying the A4D Skyhawk. In the 1950s, Foust became a member of the "Mach 10 Club" as a pilot that flew 10 times the speed of sound. He retired from the military in 1981 as a lieutenant colonel.

"I think it's amazing I'm still here," he added.

Still sharp, witty, and with a mischievous glint in his eye, Foust talked about his life and his birthday milestone from his home on Saturday. In June, he moved to his new residence in Yreka after spending the previous three years in the Lake Shastina area. He lives with his wife of 64 years, Betty Jo, who is 94, and his daughter, Kathleen.

"It's been a wonderful journey," Betty Jo said.

When asked the secret to longevity like his, Foust laughed: "Damn if I know. ... I've had a good life." He added with a smile, "The first hundred is the hardest."

Foust was born in Montana and raised in Hayward, in the San Francisco Bay Area. After his retirement, he moved to Siskiyou County to be closer to family.

He's still going strong despite a back injury last year, which stopped him from chopping his own firewood. Foust had a heart attack in July but has recovered.

He has a bit of trouble hearing, but his mind and spirit are still strong, and he has a beautiful way of telling a story or throwing a witty joke at a visitor or his granddaughter, Ava Trerice, a Weed resident.

Family came from far and wide to celebrate Foust's birthday, including his son, Lee Foust, who is a professor in Italy; his other children; grandchildren; and great-grandchildren.

The most challenging work Foust did was as a pilot was in Korea, he said. Compared to World War II, "I got shot at a lot more. Every bird gun you went over you took shots."

In World War II, Foust did his bomb drops 14,000 feet in the air, but in Korea, he had to fly closer to the ground to find his target, which made his plane more vulnerable to enemy fire, he explained.

Foust was a member of the Marine Fighter Attack Squadron 323, also known as the Death Rattlers. He served with them during the Korean War.

"I never got shot down or got sick," Foust said. "I always completed my missions. It was a lot of luck, I know. I had a lot of close encounters."

Fourst successfully performed 64 missions flying off an air carrier, which "was challenging to say the least," trying to take off and land in such a small space. But, he added, he never missed the landing strip.

On Saturday, Foust brought out a photo of his squadron from World War II, taken at a base in the Marshall Islands on the Kwajalein Atoll. He was a member of the Marine Fighting Squadron 155, also known as the "Ready Teddy." He looked at all the men in the photo and pointed himself out. He also recalled one of his friends in the photo became a general.

Foust got a bit sad as he talked about another man, a wonderful pilot that died in a plane crash in the 1950s. Also in the photo was fellow pilot and a friend of his: John Glenn.

Glenn went on to become third American in space and the first American to orbit the Earth, circling it three times in 1962. Following his retirement from NASA, he served for 25 years until 1999 as a Democratic U.S. senator from Ohio. In 1998, he flew into space again at age 77, the oldest person ever to do so. He died in 2016 at age 95.

Foust joked that he liked Glenn until he became a politician and a Democrat.

"It was interesting," he recalled. "It was very fast." Foust said it was hard to keep the plane from tucking under, and it took a lot of skill and savvy to keep the plane up; it was an experience that was scary and exhilarating at the same time.

He said he is happy with his life, but the back injury and recent heart attack have been tough to endure. However, "you can't do much about it," Foust said.

Trerice said she always enjoyed her grandfather's sense of humor and said he is always there for his family.

Trerice became a big San Francisco 49ers fan because of him, and they plan to watch games again together this fall.

"It's a huge number," said his granddaughter Rain Martin, a nurse at Fairchild Medical Center in Yreka, about her grandfather hitting the century mark. "He is living history."

Martin said Foust is a resource for her three children, who have learned a lot from their great grandfather.

"He tells them great stories," she said. "He's just a really humble, intelligent, funny man." She recalled how Foust would make her laugh as a child doing handstands across the room.

"I look to him for insight," Martin said. "My moral compass definitely comes from him. He's a wonderful human being."