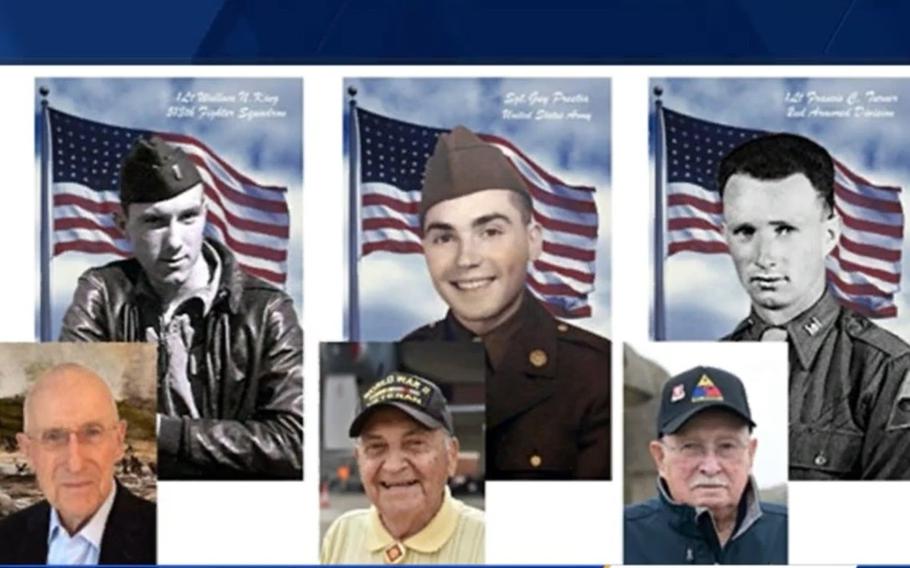 Wallace N. King, 97, Guy Prestia, 99, and Francis C. Turner, 102, were admitted to the Legion of Honor for participation in the liberation of France in World War II. (Screen capture from YouTube)

SAEGERTOWN, Pa. (Tribune News Service) — A 102-year-old Saegertown resident received France’s highest honor when he was one of three western Pennsylvania residents admitted to the Legion of Honor.

Francis C. Turner was recognized for his participation in the liberation of France as a member of the Army’s 17th Armored Engineers Battalion in World War II. French Consul General François Penguilly bestowed the honor on Turner and two other veterans of World War II who fought to liberate France — Guy Prestia, 99, of Ellwood City, and Wallace N. King, 97, of New Wilmington.

Susan Benninger of Saegertown, Turner’s daughter, attended the ceremony with him but said that as a child in the 1960s she knew little of his wartime exploits.

“When I was in high school, and of course we were watching Vietnam, I said something about the war,” Benninger recalled this week, “and my mother told me he was a highly decorated soldier.”

When Benninger asked her father about his experiences, he told her that she “didn’t need to know” about them. Accompanying her father on military reunion trips, particularly in the years since her mother’s death in 2008, Benninger has become more familiar with his accomplishments.

Turner, who enlisted prior to the war and completed Officers Candidate School in mid-1942, participated in the North African Campaign and later landed in Normandy three days after D-Day, according to a brief biography prepared by Eric P. Montgomery, a friend of Turner’s who helped to coordinate the Legion of Honor ceremony. As the Allied Forces battled their way across France, the 17th Armored Engineers Battalion cleared the way for advancing infantry by sweeping for and disabling mines left behind by enemy forces.

Montgomery, who also attended the Legion of Honor ceremony at the Soldiers and Sailors Memorial Hall and Museum, was impressed by both the event and the men it recognized.

“The ceremony was truly reflective of the duty and honor each of these men carried with them during the war,” Montgomery said in an email to the Tribune.

The unit continued through northern France, entering Belgium after the liberation of Paris, and later taking part in the Battle of the Bulge. Turner was awarded the Bronze Star Medal for actions during his unit’s entry into Germany, according to Montgomery’s biography. The citation that accompanied the medal describes Turner’s efforts in leading a mine-sweeping part prior to a tank attack “while enemy patrols were active in the area.” When additional efforts were needed shortly after dawn, the citation states, “Turner and one mine detector operator cleared the additional gaps in full view of the enemy.”

Born in Centerville, Turner attended Penn State University after the war and married Mary-Jean Alice Lilly Turner of Saegertown in 1948. The couple relocated to Tunkhannock, west of Scranton, in the late 1960s and Turner pursued a career as an extension agent, continued in the Army Reserves until retiring as a major in 1979, and stayed busy with a wide variety of activities, particularly his decades of involvement with Rotary. Turner moved to Saegertown in late 2018 to be closer to Benninger’s family, Benninger said.

“You can’t find anybody that was more engaged in his community,” she said of her father.