A former Marine was pulled over for following a truck too closely. Police took nearly $87,000 of his cash. 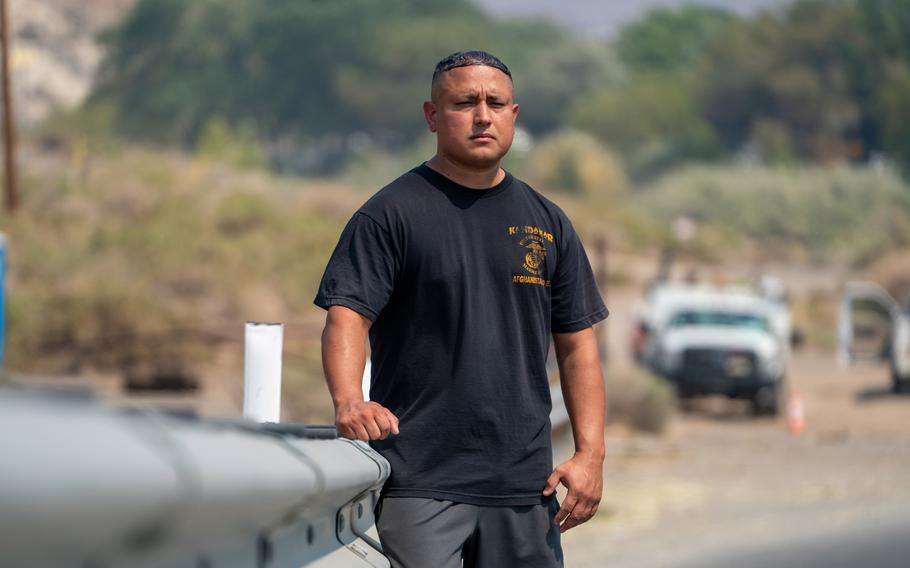 Stephen Lara poses along a Nevada highway where law enforcement seized nearly $87,000 from him in February — without alleging any crimes. (Provided by Institute for Justice)

The Nevada trooper first told Stephen Lara the highway patrol was educating drivers "about violations they may not realize they're committing," and that he'd been pulled over for following a tanker truck a bit too closely. After some small talk, the trooper admitted an ulterior purpose: stopping the smuggling of illegal drugs, weapons and currency as they crossed the state.

Lara — a former Marine who says he was on his way to visit his daughters in Northern California — insisted he was doing none of those things, though he readily admitted he had "a lot" of cash in his car. As he stood on the side of the road, police searched the vehicle, pulling nearly $87,000 in a zip-top bag from Lara's trunk and insisting a drug-sniffing dog had detected something on the cash.

Police found no drugs, and Lara, 39, was charged with no crimes. But police nonetheless left with his money, calling a Drug Enforcement Administration agent to coordinate a process known as "adoption," which allows federal authorities to seize cash or property they suspect is connected to criminal activity without levying criminal charges.

"I left there confused. I left there angry," Lara said in an interview with The Washington Post. "And I could not believe that I had just been literally robbed on the side of the road by people with badges and guns."

On Tuesday, Lara sued the Nevada Highway Patrol over the seizure and filed a court motion asking the DEA to give his money back, saying it was taken without probable cause as part of a program that incentivizes such conduct.

Lara and his representatives concede some of his actions could raise questions. But advocates say the case is an example of how the federal government abuses its asset forfeiture authority, putting the burden on those whose property is taken to prove their innocence to get it back.

The "adoption" maneuver is particularly controversial, they say, because it involves federal law enforcement using its power to encourage a seizure by state police. Much of the forfeited property ultimately goes back to the state agency if it's not returned to the original owner, and advocates say many owners don't have the means or sophistication to get their items back.

Attorney General Eric Holder curtailed use of the practice in the Obama administration, but Attorney General Jeff Sessions restored it under President Donald Trump. Though Attorney General Merrick Garland has rolled back many Trump-era changes at the Justice Department, he has not taken any action on asset forfeiture.

"This is an inherently abusive power that state and local law enforcement should not have," said Wesley Hottot, a lawyer representing Lara with the Institute for Justice, which advocates against civil asset forfeiture. "What we see almost exclusively are people like Stephen who — perhaps had quirky banking practices — but they're not guilty of any crime. And yet, in the nation's airports, on the nation's roads, they're treated by police as though a large amount of cash by itself is criminal. And that power is too dangerous to give every police officer on the street."

Spokespeople for the Justice Department, DEA and Nevada Highway Patrol declined to comment.

To law enforcement, Lara in some ways fit the profile of a drug trafficker. He planned to drive more than 40 hours over four days in February, from Texas to Northern California and back. In addition to the cash, he had a stack of receipts showing ATM withdrawals of more than $130,000 over three years — seeming to anticipate the bills in his trunk would draw questions.

Video of the stop, recorded on multiple body cameras, shows the trooper and Lara having a genial conversation, with Lara agreeing to be searched. The troopers pull the cash from his trunk, and remark that the bills seem to be new. Lara points them to the receipts, which he says prove the money is his.

"As odd as it is, everything lines up," a trooper says at one point.

In the video, Lara tells the troopers he does not trust banks. At one point, a sergeant on the scene calls someone — apparently a DEA agent — to confirm the forfeiture process.

"It's too easy to do an adoption," the sergeant says.

But that year, Sessions issued a directive reviving the practice.

In 2018, the amount forfeited by the Justice Department through adoptions not connected to a joint operation crept up to $19.6 million, according to the institute. It fell slightly, to $16.5 million, in 2019, the last year for which the institute says there is reliable data.

Lara's suit and related filing asks for the return of his money, a declaration that the seizure lacked probable cause and a restraining order barring the Nevada Highway Patrol from participating in the federal program that allows them to share proceeds of forfeitures.

Lara insists the money seized was his, earned legitimately over many years. He said he typically kept the cash in the home he shares with his parents in Lubbock, Texas, but had it in the car with him because he was planning to look for homes closer to his children that weekend, and his parents were scheduled to be out of town.

"I felt that it was safer that I secure my money by taking it with me," Lara said, adding that he kept receipts in the car because he likes to keep "tight documentation" of his finances.

The DEA notified Lara in early April that it was initiating "administrative forfeiture proceedings" for the cash taken in the Feb. 19 seizure — which would allow them to keep it, if he did not intervene.

With the institute's help, Lara filed a formal claim for the cash on April 21. The DEA confirmed receiving the claim, but he said he has heard nothing since. In a court filing, Lara's attorneys asserted that the government needed to have filed a civil forfeiture complaint or a criminal case within 90 days to hold on to Lara's money.

Over the years, Lara has had legitimate sources of income, including retirement pay from his military service, which included tours in Iraq and Afghanistan, a hospital job and unemployment benefits. He provided The Post years of bank statements. They show some confusing patterns, including widely variable monthly activity in which Lara transfers money back and forth between checking and savings accounts, but also support Lara's explanation that he liked to keep most of his savings in cash, and made bank deposits to pay certain bills.

A search of available public records does not reveal any significant criminal history for Lara. He pleaded guilty in 2017 in an insurance fraud case, which was dismissed after he paid a fine and did community service.

Lara concedes in the video of his stop that he had not paid taxes in two years; Hottot said he has since prepared returns, with the help of an accountant, and intends to file them in the coming days.

Former U.S. attorney Joyce Vance said some of the details of Lara's case mimic classic signs of money laundering — and to a suspicious prosecutor, his claim to distrust banks could sound "like a pretty good cover story." It is possible, she said, that investigators are still trying to build a case against Lara, or potential associates, which might give them a reason to hold his money.

But Vance said the case also highlights why many in law enforcement prefer to pursue forfeiture cases connected to indictments, rather than taking assets in civil court.

"You can't just take people's stuff because you happen to find them with cash," Vance said. "We still live in a country where people are innocent until they're proven guilty."

Kimberly Olsen, Lara's ex-wife, said Lara owes her about $18,000 in child support — about $900 a month is automatically deducted from his income to chip away at that. Last year, she successfully sought a restraining order against him so their contact would be limited to brief exchanges surrounding his visits with the kids.

Hottot, Lara's attorney, said Lara disputes he owes $18,000 and is negotiating with authorities to get it erased, even as he pays it down.

Olsen said she thought Lara might have kept his money out of the bank in part so he would not have to turn it over in child support. But she noted that even when they were married years ago, Lara "just liked to have his cash," and made frequent withdrawals.

She said Lara did not seem to spend an inordinately high amount, but liked to "show off" the cash itself, and spend it on his kids. She said she did not think he was a drug trafficker.

"He has some problems. That's why I have a restraining order against him," Olsen said. "But I just don't see this being some ordeal where he's selling drugs or something. I just think he's weird."

As the traffic stop came to a close — and officers declared they were taking Lara's money, even though he was free to go — Lara seemed to grow frustrated. He questioned how he'd pay for his hotel room, and food for his children during the trip.

"You're taking food out of the kids' mouths," Lara says on the video of the stop.

"Like I said, we, we believe right now that this is drug proceeds," a trooper responds.

The Washington Post's Alice Crites and Alex Horton contributed to this report.