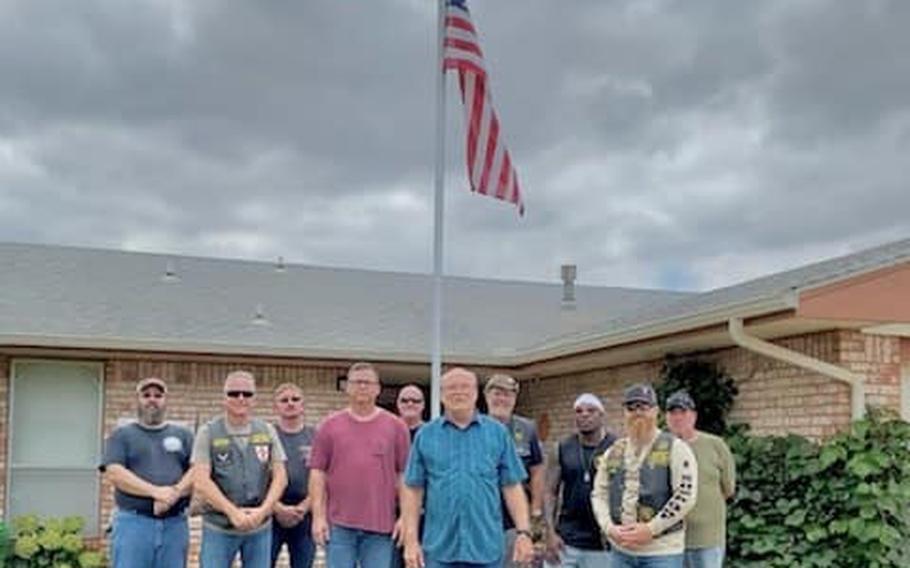 ENID, Okla. (Tribune News Service) — Enid resident Matt Sabin got a little choked up talking about what the American flag means to him Saturday.

Sabin, who served in the U.S. Army from 1969 to 1972, was one of three veterans who received a flagpole installation at his home from the local chapter of the Oklahoma nonprofit Flagpoles Honoring Our Veterans on Saturday.

The nonprofit's North West Chapter started in March as a way to honor local area veterans by installing flagpoles for them for free, chapter president Cale Grauberger said.

Since then, the chapter has installed 15 flagpoles, including the three from Saturday.

The first stop was at Donald Shearmire's home. The retired Army veteran said he felt a lot of emotions watching the group of about 10 members of the Combat Veterans Motorcycle Association and other volunteers install his flagpole.

The veterans first broke ground on the hole for each flagpole. Then, once the flagpole was in the ground, they hoisted the flag up while a crowd said the Pledge of Allegiance.

"I had no idea there was something like this out there," Shearmire said. "(The flag) means a lot to me as far as my service, the sacrifices of my fellow soldiers, all who have served and everybody that represents the military — all that everybody does."

Glenn Watt, a Navy veteran and member of the CVMA from Oklahoma City, went to all three homes to help the chapter install the flagpoles. The group broke up into smaller groups to put the poles together, dig the hole and mix concrete.

During his third installation Saturday, Watt said he always enjoys seeing the veterans' faces when they raise the flag.

"It's really prideful, and I've had a great time every time I've done it," he said. "I think it's a great service what these guys do."

The military is a "huge family," said vice president Roy Powell, who said his 12 years in the Army were why he wants to install flagpoles for veterans.

"It's a brotherhood," Powell said. "We probably don't know each other, but we are a big family."

Phil Lanier, a Navy veteran who served from 1984 to 2002, went to his first flagpole installation Saturday after being invited to participate by a coworker.

Lanier, who lives in Enid, said installing flagpoles for veterans was important to do because it pays tribute to those who have served in the military.

"I think this is what the country needs right now," Lanier said. "You just build that brotherly/sisterly bond that we all have — that we've all served, so it's kind of an unwritten bond."

The third veteran who received a flagpole Saturday was Paul Powell, who served in the Air Force from 1968 to 1988. Powell said in a Facebook Live video that the flagpole would remind him of his service days.

"I can't tell you how much I appreciate (the flagpole installation)," Paul Powell said in the video.

All of the flags the North West Chapter gives to veterans are taken to Vance Air Force Base and flown aboard a U.S. Air Force T-38C Talon over Enid, and each veteran is given a certificate to show the date of the flight, the plane's tail number and the takeoff and landing times.

For veterans in nursing homes, Grauberger said the North West Chapter will provide them with wooden flags instead.

Grauberger said "no veteran will be forgotten" and that "no place is too far" for the chapter to go install flagpoles for veterans.

"Please nominate veterans," he said. "We have this whole chunk of Oklahoma. ... If there's somebody out in Beaver, Oklahoma, or Guymon, nominate them. Let's give them a flagpole."

To nominate a veteran, email the chapter at flagpolevets@gmail.com.